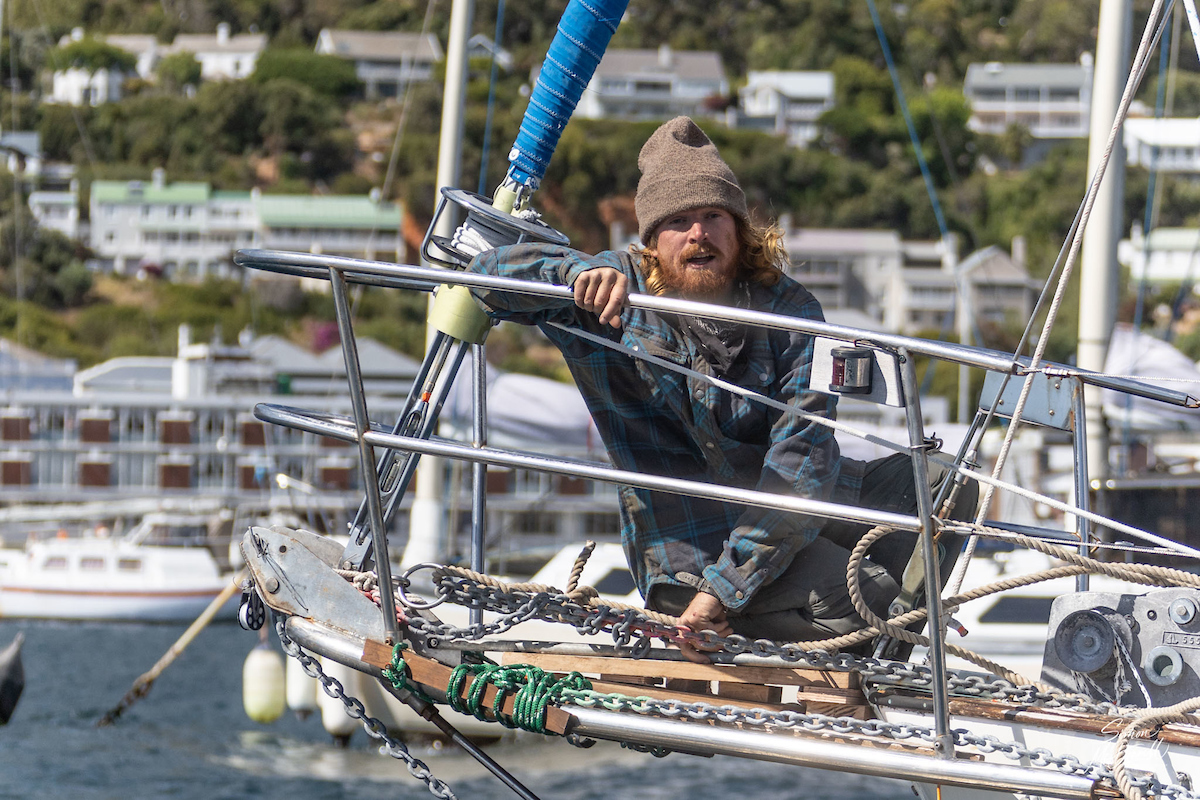 Picture above: Elliott Smith ( USA) at a mooring buoy in False Bay, Simon’s Town fixing his bowsprit after it broke for the first time. Picture Credit: Simon McDonnell / FBYC

After more than a hundred days at sea, only six of the original 16 entrants who departed Les Sables d’Olonne in France are likely to pass through the Hobart gate which shuts on January 31st. First the Atlantic has taken quite a toll on the GGR fleet, which was confronted by adverse conditions from day three. Three boats retired before crossing the equator, another three on arrival at Cape Town, and two more east of Cape of Good Hope. Guy Waites (GBR) is now Chichester Class and Elliott Smith (USA) can no longer continue past Australia. The GGR is once again taking its toll on some of the best sailors and yachts.

What a difference an ocean makes. Elliott Smith (USA) had a hard time sailing South, dealing with intense frustration in wind holes. He rose up to the challenge and after numerous repairs and eventually found the resources and the mindset to continue in spite of overwhelming odds.

In fact, he even improved Second Wind’s best 24 hour-distance on December 15 with 174 nautical miles under reduced sails before his bowsprit, repaired at anchor in Cape Town, bent up once again.

On Monday morning, Elliott started repairs with a plan: drop the forestay, holding the mast with two spinnaker halyard and staysail stay in order to fit a spare shorter cap shroud as a forestay, cut the end of reefing gear extrusions, refit it with link plates and chain to the stem fitting at bow, and disregarding the bowsprit completely.

Alas, even though the wind was down at the time, Elliott still had a 3-metre swell making repairs up the mast extremely difficult. Nonetheless, he went up the mast no less than 10 times, but the movement at the top of the mast, 13 metres above the sea level, was too much. He got bashed around and lost tools and spares overboard, eventually losing his spare stay, critical to the success of the repair.

That was the end of his Race and dream. He will be Chichester Class on arrival in Australia in about a month. He then has no time to pass the Hobart Gate and so would be out of the GGR. “I think I’m gonna have to call it a day,” he said .

You can listen to Elliott’s call to Don HERE.

We advised Elliott to slowly make his way North for a couple more degrees to get better winds and then sail East towards Fremantle or Albany which are the best bet.. It’s unlikely Elliott will be able to repair his mast and make the Hobart gate in time. He now must sail carefully for 2500 miles through the southern ocean and look after the mast at all cost. An injured mast is still better than a jury rig so he can only use two reefs in the main and a staysail. We will provide Elliott with weather information to assist him in making a safe passage.

The Rush to Hobart

The fleet is rushing to Hobart where Don and Jane are ready to welcome them in Storm bay. The gate closes on January 31st at 12:00 local time to guarantee the best possible weather through Cape Horn, 4500 nautical miles away. After that date, any Suhaili Class entrant showing up late will have to stop and make the second stage of their trip in December 2023 in the Voyager Class as a simple return to Les sables d’Olonne when GPS and free use of sat phones are allowed along with weather routing. Chichester Class entrants arriving too late at the Hobart Gate will be retired.

At the back of the fleet, Ian Herbert-Jones (GBR), who had considered missing the Cape Town gate altogether to save time and continuing in Chichester Class under penalty for not stopping, is now making pace in the South. In the process he broke his personal record several times last week, settling at 1007 miles on December 17!

Ian is sailing conservatively between the 40th and 42nd parallel, making best time and continually improving his ETA. Based on his average speeds, he has approximately 10 days to spare to reach the Hobart Gate before January 31st but there is still a long way to go. Much can happen along the remaining 3300 miles. There’s no dilly-dally and Ian could well face a high pressure on arrival!

It’s a bumpy ride along the exclusion zone for Jeremy Bagshaw (ZAF) on Olleanna who has had heavy weather all week. South of the exclusion zone, a succession of low pressure systems with strong winds and big seas ranging from north to west are creating confused sea states across the entire area. He is sailing very conservatively to preserve his yacht until the end of the zone, before being able to dive deeper. He is expected in Hobart around January 10th.

Michael Guggenberger (AUT) meticulous preparation is paying dividends. He has left the no-go zone unscathed despite very adverse conditions and has increased his lead on Jeremy, showing that his ketch-rigged Biscay 36 Nuri is matching the speeds ofSimon Curwen’s sloop rigged Clara!Cpt. Gugg is staying around 45° to 46° South, loving the conditions and posting a strong average speed of 140 miles per day for an expected arrival in Hobart just in time for New Years Eve!

Simon Curwen (GBR) unchallenged leader since the start was losing mile after mile last week while parked in a massive high that caught-up with him. He used most of his time in the calms to go through his to-do list planned for Hobart, including servicing his hydrovane fittings, and is now out of the high, but sailing upwind as he exited from the North, not the best outcome he shared today.

As you know we’re in the middle of a high pressure, which is adding a lot of time to the trick. It’s very frustrating, I could be arriving in Hobart by now, and there’s another week of beating to get there I think. It’s frustrating, but all the work I was planning to do in Hobart is done now, so I can plan for a quick turn around there.

Listen to Simon’s call in English and French HERE.

Meanwhile, Kirsten Neuschäfer (ZAF) and Abhilash Tomy (IND) on the other side of the high have been grabbing nautical miles in perfect downwind conditions, up to 180 miles a day. They both improved their 7-day distance records with Kirsten posting 1165 miles on December 12 and Abhilash 1145 on December 17, gaining significant distance on the leader.

Kirsten has been receiving detailed radio weather fax maps of the High as well as daily weather reports from Australia, so has been able to stay in the breeze skirting around the central no wind zone resulting in significant gains. Simon’s weather fax is not working, he gets weather reports but his lack of knowledge of Australian geography is hampering his understanding of the meteorological situation.

We saw this before, on the arrival to Cape Town when Kirsten did a ‘South African Slingshot’, south of the Saint Helena high, gaining on Simon upwind in the North, while Abhilash got stuck in the middle with no wind. The frustration for Abhilash was extreme.

Simon is 360 miles from Hobart and Kirsten is 560 miles out. She has only 200 miles more to sail to Hobart than Simon, compared to a 700-mile difference last week, and Abhilash is trailing just 300 miles behind Kirsten. The 3 leaders are now sharing the same weather system and will have similar strategies. It’s not finished, however, since the high pressure moving south-east will be on their route to Hobart, while Simon will be beating upwind in stronger winds and Kirsten frustrated by variable winds. ETA in Hobart for Simon is the 23rd Dec.

This is the break Kirsten has been hoping for as her Cape George 36 could be a faster design for the heavy running expected in the Southern Ocean. To have a chance of winning the GGR, she needs to be well ahead by the time she rounds Cape Horn. Simon has shown he is a strong sailor in the Atlantic legs so the game is wide open. Abhilash is in striking distance waiting, and Captain GUGG is still in touch!

Barnacle free and back around the world

Guy Waites (GBR) is not running the best funded project, but is certainly one of the most experienced sailors, having run many solo campaigns before on smaller yachts. Only the lack of time meant he could not crane Sagarmatha prior to the start, like many other entrants.

A decision that resulted in dramatic consequences for the Scarborough sailor who animated the fleet in the North Atlantic in his mano a mano with Jeremy Bagshaw (ZAF) – before discovering a barnacle invasion on his Tradewind 35.

Guy arrived in Cape Town last week just in time for the Royal Cape Yacht Club 75th Anniversary which he attended with friends and fellow Clipper Race crew. He cleaned Sagarmatha’s hull, applied two coats of antifouling and splashed on Monday morning. He will continue his journey in the GGR Chichester Class due to his one stop.

The boat is in the water now, I went for provisions with Peter and the RCYC has been a great host. Sagarmatha is ready to go and I am waiting for the right weather window to continue South, probably next Thursday when the low pressure will bring some Northwesterlies pushing me and Sagarmatha in the right direction. This is a race against myself now, but I know I can make good ground.

Listen to Guy’s call in English and French HERE.

Guy has 5400 miles to go before January 31st. Not an easy task requiring an average distance over 132 miles a day, but not impossible for Guy. What is certain however is that he will enjoy the long surfs downwind in the Southern Ocean on Sagarmatha with a clean, smooth and slippery hull. Go Guy!