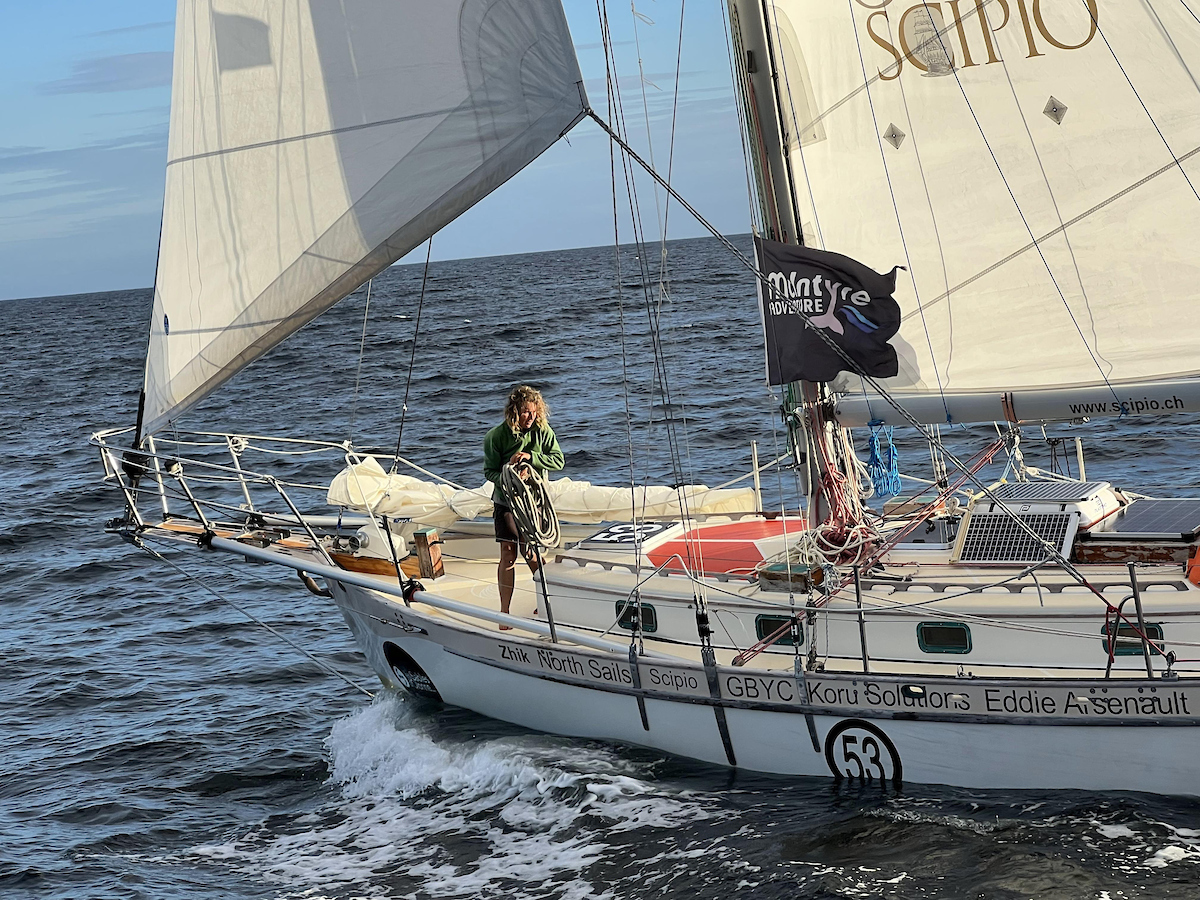 Boxing Day is always a special day in Australia as the Sydney to Hobart Race fleet rushes south towards Tasmania. This long-standing sailing event is famous for its Maxi Yachts competing for line honours, and notorious bad weather in the Bass Strait between Australia and Tasmania. This year, northerly winds building up to gale force on the approaches of Tasmania meant a possible new race record for the maxis, ahead of the standing 1 day, 9 hours, 15 minutes LDV Comanche record, but also brought storm warnings for Simon and Kirsten in the Tasman Sea. After passing the Hobart Gate, Simon has taken the lead once again, rounding New Zealand with a strong 300-mile lead while Kirsten holding 2nd struggles in light winds and Abhilash closes from behind.

Weather warning for the leaders

Both Simon Curwen (GBR) and Kirsten Neuschäfer (ZAF) struggled to get out of Storm Bay and into the Tasman Sea with unstable winds in strength and direction after going through the Hobart Photo Gate. However, Simon’s wish for more typical Southern Ocean conditions were answered with an active front crossing their path with Big winds and seas, damaging the trysail mast track aboard Minnehaha as described by Kirsten in her weekly call.

The low-pressure system, coming from the West, brought a cold front by Tuesday with 35 knots of wind, gusting 45 to 50 until Wednesday. The Northerlies going down New South Wales, Bass Strait and Tasmania broke the westerly swell for some increasingly confused seas for the two leaders while Abhilash Tomy (IND) took the wise decision to wait overnight in the Hobart film gate for winds to drop and swing West before setting out.

Kirsten was the virtual leader of the GGR, but it’s a long way home.

The fight for first place is on for the two leaders, and will continue through the southern Pacific. Simon Curwen (GBR) rounded the southern tip of New Zealand on New Year’s Day with Kirsten 300 miles astern. He was first at the Hobart Gate on December 24 at 12:06 local time (0106 UTC) on a solid-looking Clara, his Biscay 36 sponsored by Howdens, chased by Kirsten Neuschäfer (ZAF) just 29.5 hours later onboard Minnehaha.

If there is one thing I know, it’s that all are still a long way from Les Sables d’Olonne and anything can happen, BUT… this is exciting racing with three different boats, three top sailors and all now in the same weather system and all hungry to be first. The stories keep coming and the LIVE interviews at the film gates are very revealing!

The leading trio has now sailed over 50% of the course. Simon, the undisputed leader of the fleet from Cape Finisterre, has been consistently sailing the shortest route, with an efficient risk/benefit assessment for every move and routing choice. Kirsten’s ambitious routing options have not always paid off, particularly in the Atlantic but enabled her to come within reach on the Cape Town approaches, and in the lead when passing through Tasmania.

Simon’s shrewd sailing strategy enabled him to build a comfortable 700-miles lead over the rest of the fleet while passing Cape Leeuwin. However, a faulty HF radio installation is restricting his access to weather information and communications. He is not receiving the weather faxes that Kirsten has and cannot talk to other entrants who are sharing weather information. Neither can he reach Peter Mott in New Zealand, a Private Maritime Radio service offering GGR entrants weather bulletins and passing Happy New Year Messages to family. This service from Passage Guardian would come in handy in the weeks ahead with reception expected all the way to Cape Horn.

Abhilash Tomy (IND) had the weather on his side while sailing a superb run into Hobart, taking nearly 600 miles out of both leaders in just one week – before getting stuck in a windless bubble himself. He finally crossed the gate on December 27th at 17:48 local time (0648 UTC) happy but very tired after being stuck in no wind for so long! He described a close call, waking suddenly from a dream to find he was headed straight for cliffs just 500 metres away. He also experienced a HUGE physical and psychological boost once he sailed past the site of his 2018 GGR accident where he lost his boat and was severely injured. He spent the night at anchor, waiting for more favourable winds, sleep and to do some maintenance before heading out towards Cape Horn.

The mid-fleet is catching-up on the leaders

While the leading trio got stuck around Tasmania, the mid-fleet had a bumpy ride for Christmas, especially Michael Guggenberger (AUT) and Jeremy Bagshaw (ZAF) who celebrated his 60th birthday in 40-knot winds and 7-metre waves. Apart from a cheeky Christmas present in the form of a deep low-pressure, the mid-fleet has been progressing well. Ian Herbert-Jones (GBR) has maintained a 120-130 nm per day pace on Puffin along the exclusion zone, his new standard which he needed to keep ahead of SUHAILI and the Gate!

Captain Gugg (Michael Guggenberger ) who kept a regular pace of 140 nm per day, mastering a well-balanced ketch-rigged Biscay 36 is approaching Tasmania. His high average speeds ended though just 15 miles from the Tasmanian coast when he was becalmed and sat going nowhere for 36 hours. He is now expected to make the Hobart gate late on the 2nd January. This means that the mid-feet sailors gained up to 400 miles in a week over Simon, and while the gap with the lead is still significant, Michael, 600 miles from Abhilash has not lost ground on them. This alone is an exploit considering the incredibly fast pace of both Abhilash and Kirsten who have beaten both the 24-hour and 7-day fleet records between December 17 and 23.

While Ian is reducing the gap with Jeremy by 20 to 25 miles a day, Captain Gugg is exiting the mid fleet to join the leading trio for the home stretch through the Southern Pacific, with a boat in perfect conditions, matching the performance of Simon’s cutter rigged sister ship and all in good Spirit as his weekly call suggests

Several thousand miles behind the leaders, Ian was unsure he would make the Hobart Gate in time when in Cape Town a month ago. At the moment, he has a 16-day time cushion on the Hobart Gate with an ETA on January 15th while taking 10 to 20 miles out of Jeremy every day. In fact, he managed to reduce the trailing distance from 1050 miles at the beginning of the exclusion zone to 720 miles as of today! It might seem far-fetched but with another 15.000 miles to go, the battle for 5th place may be on!

Between Cape Town and the end of the exclusion zone, the situation is a bit more complicated for Guy Waites (GBR) and Elliott Smith (USA) who have both been dealing with high pressure systems catching up on them, hampering their progress towards Australia. Both understand that they cannot now make the Hobart Gate in time. Both have contingency plans and keep finding the resources to continue sailing. Hats off to them!

Guy is determined to continue his solo circumnavigation as explained in his weekly call but will be retired from the GGR once the Hobart gate closes. Elliott has been doing well despite being forced to sail with a double reefed main and staysail only to nurse his Second Wind after the bowsprit broke again. His goal now is to get to Australia safely, planning to make landfall in Fremantle for repairs, as he told us this week. He is currently being hit by a small intense low with 5-6 metre seas and 55 knots gusts. A sudden wind shift expected may set up a dangerous sea.

When the leaders are all in the same weather system, tactics are everything and it is exciting to watch. When Elliot has an intense tight low-pressure system with potentially confused seas on a collision course, that is hard to watch. It’s clear the decision to delay the GGR start two months for better weather is paying off, but they are still around and it is still a long way to Cape Horn!