Retired: 16 November 2022 – personal reasons
Ertan retired after reaching the Cape Town gate on November 16 on Lazy Otter. He said he lived an incredible experience over the 10 weeks, but did not think he would enjoy the next three months to Cape Horn, citing extreme isolation. “I was looking for the unknown and I found it” he said.

Ertan Beskardes entered the 2018 edition of the Golden Globe as one of the last entrants to sign up. With just months to the start, he bought a Rustler 36 and started training and rebuilding the boat. His close knit family were 100% behind his efforts. This was critical to him making the start, as the pressure was immense toward the end. His much loved friendly style was obvious to all in the GGR and his breakfast omelettes for all on the marina became world famous!

Just five days after setting off on the GGR adventure it all hit home. The boat was ready, but he was not. He made the bold decision to retire. As the FIRST entrant into the 2022 GGR, Ertan is continuing his planning and preparation including the 2020 OSTAR and will surely be ready in Sept 2022!

He came to the UK in 1979 and made a career in military tailoring and regalia, before setting up his own company with his wife in Bournemouth in 1994. There, they built a boat in the back garden and have been sailing regularly in nearby Christchurch harbour since 1998. As their children grew up he graduated first to a Drascombe Cruiser Longboat, then a Parker 235 cruising yacht before buying a Jeanneau Odyssey 33 in 2012, sailing each year-round. Ertan had planned to sail singlehanded to the Azores, taking part in the Jester Challenge race once, and twice on his own accord only to be thwarted each time either by limited time or bad weather.

I have always been self-employed and always wanted to do something special like sail around the world. I first learned about the Golden Globe Race on Facebook in 2017 and thought to enter the second race in 2022, but then learned that there were places available for the 2018 event. I quickly found a Rustler 36 in Sardinia and have been preparing her for the race ever since.

She was prepared within the next 6 months, as best as I could. Shortly after the start, I decided to stop the race. I was not happy being away after 6 months of race preparations.

Lazy Otter and its skipper are now much better prepared boat for 2022 race. I have learnt great deal about the race, spending time with last lot of GGR sailors have been invaluable.

There has also been lot of sailing done with Lazy Otter. Since 1st July 2021, based at Les Sables, boat is ready, more importantly I am ready for the journey ahead. For me race is ambition to achieve dream but not in the expense of everything else in my life. I have a family, a business and plenty of wonderful things around me.

The race must be exciting and fulfilling for me. Don always says it’s about the people and it’s very true. Every entrant will have to find their own reasons to be isolated for so long away.

Our achievements can only have a value if we are to share all with our loved ones. Me, my family, friends and colleagues are ready for the start of this rare journey, whom I owe a great deal to make things happen now and during my long absences.

Can not wait to be in the start line with my loved ones and great people of Les Sables! 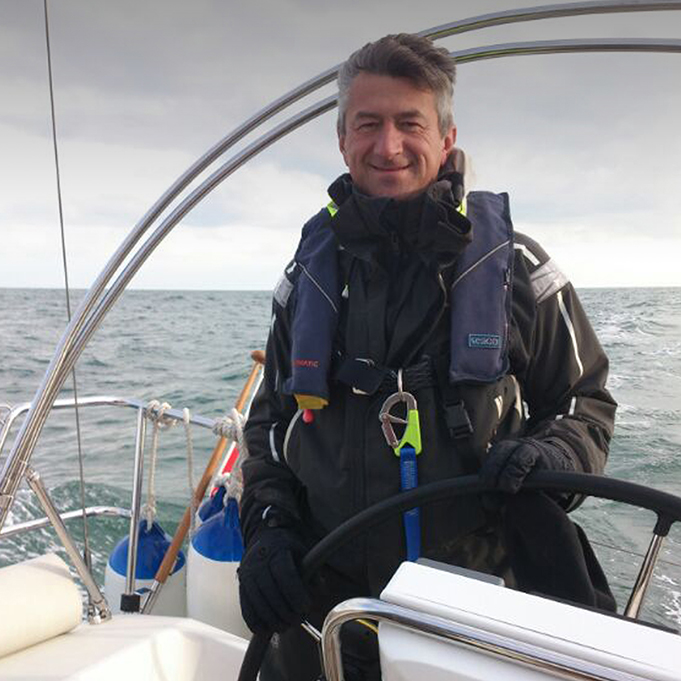