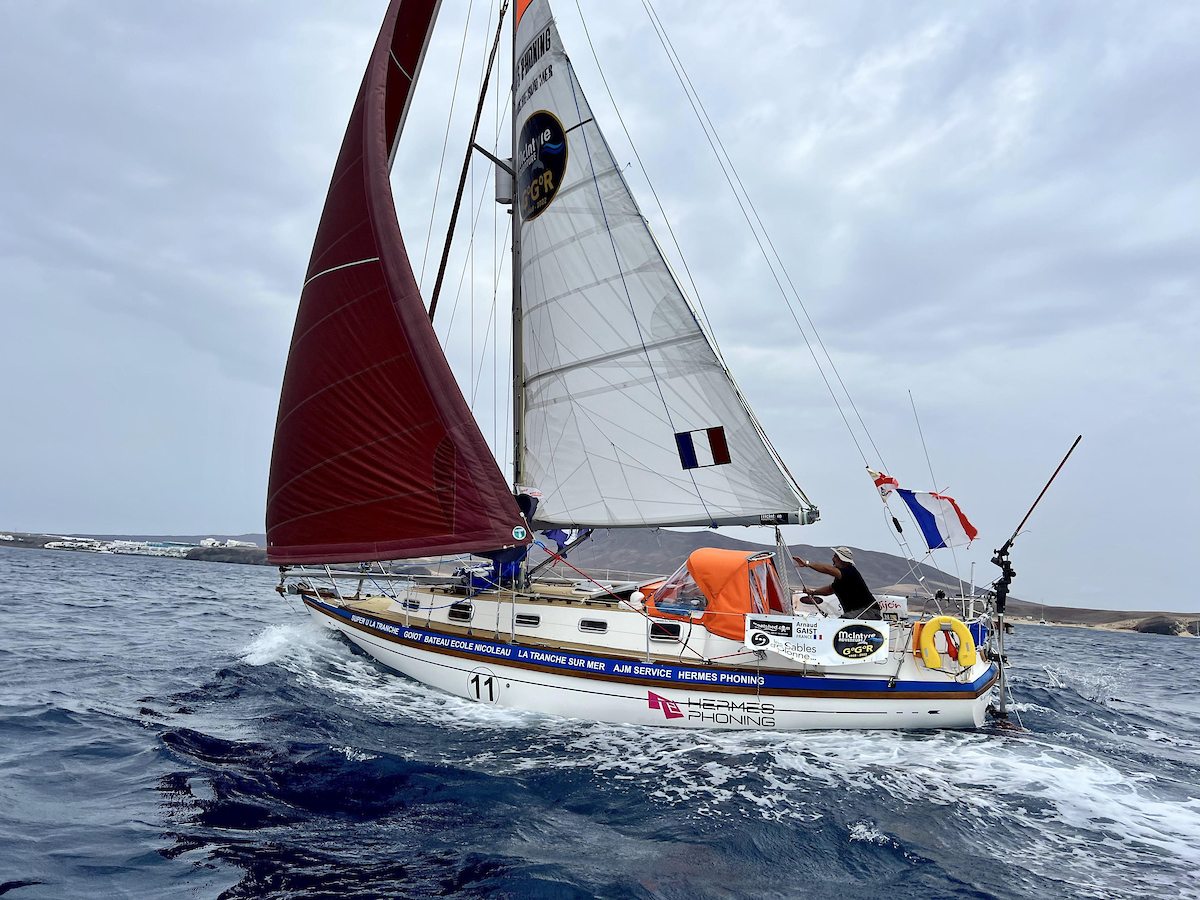 Picture above: Arnaud Gaist (FRA) has been plagued by rigging issues over the past few weeks and now, on top, also with barnacles, He has given up! Picture credit: Aïda Valceanu/ GGR2022

The Golden Globe Race fleet is stretched 5000 miles across the Southern Ocean and is not short of stories. Just nine sailors are still bound for Les Sables d’Olonne in France and they are not even halfway! The weather, as much as it has been frustrating and even slow for the sailors, is not bringing the usual intense Southern Ocean storms and that is a good thing. The two months delay starting this edition was obviously a good decision, but then getting around Cape Horn before the end of March 2023 and the “Hobart Gate” closing on the 31st of January for slow entrants is a whole new threat! The Golden Globe is full of challenges. It is hard to get to the start and even harder to make the finish.

Arnaud Gaist (FRA) has been plagued by rigging issues over the past few weeks and now, on top, also with barnacles, He has given up! Today he is 200 miles out of Saint Helena. He officially notified GGR control that he is retiring from the race and is heading north, unable to sail to windward. It took a long, frustrating and depressing time to make the decision but now that it’s done he feels relaxed. After three years of planning and preparation it is a hard decision to make. With another 150 days of food on board, he is planning to head eventually to the Caribbean and then on to Les Sables d’Olonne once Hermes Phoning is back in shape.

The second remaining GGR skipper In the Atlantic, Guy Waites (GBR), is 200 miles from Cape town and has been posting surprisingly good speeds with his barnacle infested Tradewind Sagarmatha. He should make landfall Sunday night or Monday. He will slip the boat, scrape the Barnacles and paint the bottom and could set sail a few days later. But will he? He will be a Chichester one stop sailor because of the stop. He has some serious decisions to make with Hobart about 6000 miles away through the Southern Ocean and only 47 days to get there before the Gate shuts! That is averaging 128 Miles a day on a direct course? As a Chichester sailor missing the gate you are no longer in the GGR. He said he will make no decisions until he is ready to set sail and is focused on doing that as soon as possible.

Is the modern-day Bernard Moitessier a young American sailor?

Trailing at the back in the Southern Indian Ocean, 27 year old Elliott Smith (USA) has faced a lot over the last 17 days, when he decided to turn back towards False Bay after his bowsprit failed. In total Bernard Moitessier fashion, who repaired the bent bowsprit of his Joshua during the 1968 GGR, Elliott has spared no energy or creativity to repair and strengthen his own, unassisted, on Second Wind.

Since then, he has struggled heading east towards Hobart with strong headwinds, calms and then one violent storm he found exhilarating. He has faced more onboard challenges, including his Hydrovane set up. Both the bronze fitting that links the securing lines to hold the tiller stationary and a bolt on the actual unit came loose. His mainsail slides are failing and he has been swapping slides from his older main to replace them, but is about to run out.

Finally, his main sextant got broken. The failure of a small plastic shaft has made the micrometre drum inoperable as it is free spinning. This is critical to the sextant operation. He has tried everything to fix it. Epoxy, super glue, a bolt gripping it, and more but so far to no avail. He has a spare EBCO Plastic sextant. Fellow entrant Michael Guggenberger gave it to him during the race village in Les Sables d’Olonne and said ‘Good Luck!’.

What would have been a frustrating experience only a few weeks back seems to leave the young american unfazed, and with more resources and fortitude, as well as a clear sense of why he is there and why he keeps sailing.

I‘m learning to let it go. I used to be so angry and frustrated at the weather, the boat and everything seemed to be breaking. The hydrovane was working loose right before the storm, my sextant broke, more slides out of the mainsail, and then dead calm… I just exhausted myself with anger, and thought, what am I getting angry at? Am I holding on to a position in the race that is totally arbitrary in the grand scheme of my life? I did not sail out to care about winning, I want to finish. (…) I dove into the cassettes, the music, and the messages that people left me on the cassettes caught me off-guard and I just had to let it go.(…) It’s all good!

Elliott, who shared his feelings in his last safety call, needs to find his pace with his reduced rig, and sailing Second Wind to her possibilities to make the Hobart Gate in time before it shuts on 31st of January 2023.

Simon Curwen (GBR) passed the eastern end of the exclusion zone on December 5th and dipped down to 45° S in order to find steadier and stronger westerlies, making most of his now 750 miles lead over Kirsten Neuschäfer (ZAF). A strategy that has worked well for him although he got the best out of Clara in his last days along the no-go zone, slashing his personal best distance over 7 days on December 6 with 1143 miles (6,8 knots average) and his best distance in 24 hours on December 3rd at 175 nautical miles (7,3 knots average), equalling Michael Guggenberger (AUT) on the other Biscay 36 in the fleet. He reports everything is well onboard but he still has a chafing issue with his halyards. Every few days he must move the wear spot and swap them over to stop them failing but he feels good about everything.

Others have had very strong winds over the past week and made good use of it. Ian Herbert-Jones (GBR) told us of his close encounter with a very active weather front in his last call, and equally posted record mileage for the Tradewind 35 Puffin with 182nm in 24 hours.

He described watching extreme weather pass him by just a few miles away for hours as he drifted along in 10 kts of wind with everything up and then Bang! He was pinned on his side with Puffin laid flat and then began the biggest seas and winds he has ever seen. He wasn’t worried, but he was scared.

Jeremy Bagshaw (ZAF), who is finally enjoying sailing a clean hull on Oleanna, has had his fair share of bad weather, often down to just a storm jib running before big seas. He still  made excellent speeds all week, beating several times his personal 24 hours best, finally settling at 165 nm and 1022 nm over a week on December 6th. Welcome to the 1000 miles Club Jeremy!

Kirsten Neuschäfer (RSA) is living her dream and completely at one with her boat and the GGR and happy to be in it. She loves navigating with the sextant, not sailing with computers and screens everywhere and even without weather forecasts, instead having a feel for the weather. She continued to work hard in second place, racing against herself and at one point came to within a few hundred metres of the Southern Ocean Exclusion Zone and a potential time penalty before turning north.

The Exclusion Zone marks the southern limit for all entrants. It is established in consultation with the Maritime Rescue Coordination Centres in case an entrant is in distress. If they were too far south, it makes it extremely difficult to provide assets to an effective rescue. Very few ships transit the southern ocean and they rarely go south of 40º S latitude. The zone has thus been drawn at 44º S. Any entrant crossing that boundary suffers a three hour time penalty for every hour inside the zone.

Kirsten broke the fleet’s 7-day distance record, posting a whopping 1143,7 miles on December 1st! Doing so, she now holds all the records of the fleet including the 24-hours distance at 218,9 miles, and the 4-hour average speed at 9,8 knots! This enabled her to put 280 miles between her and third place entrant Abhilash Tomy (IND).

Abhilash Tomy ( IND) reported a small issue with his Windpilot self steering system when the servo arm sheared which he was able to replace. He was happy to have exorcised his Southern Oceans devils, passing the Cape of Good Hope and the longitude of Cape Comorin (the southern tip of India) 3000 miles north with Bayanat. This was the area where he experienced the rollover, dismasting, serious back injury and rescue during the 2018 Golden Globe. He is happy to be covering new seas now and heading to Hobart.

For the first arrivals in Hobart the game is open regarding ETA’s. The leading trio should make the gate in 2022, with Simon Curwen arriving around the 19th of December, followed by Kirsten Neuschäfer on Boxing Day, 26th of December, and Abhilash Tomy on the 30th. The famous Rolex Sydney Hobart Fleet will be arriving at the same time.

Tapio Lehtinen (FIN) Arrives HOME! He has been dropped off by the M.V. Darya Gayatri in Jakarta on December 6th at 2200 local time, 19 days after his rescue in the Southern Indian Ocean. He is scheduled to fly into Finland on Tuesday, 13th of December, to a press conference answering questions about his experience. Kirsten will join the event via sat phone which will be shared to GGR Facebook Live. Tapio, who will be at the Auckland stopover of the www.OceanGlobeRace.com this time next year in the middle of his next circumnavigation, is looking forward to a white Christmas in Finland surrounded by his loving family. Captain Naveen Kumar Mehrotra and his crew are resuming their route towards Rizhao which they will reach in late December.

Meanwhile Pat Lawless (IRL), who is delivering Ertan Beskardes’ (GBR) Lazy Otter back to Europe, had time to do some thinking and sent a Tweet to GGR control about a possible GGR 2026 entry! Most of those who have retired to date are thinking the same way! Entries are now starting to arrive for the third edition of the GGR with a few looking for Cape George 36 Yachts.

Where did the wind go?

Due to a strongly positive Southern Annular Mode (SAM) during summer in the southern hemisphere, we see the majority of southern ocean storms passing south of the exclusion zone. The positive SAM is a result of multiple factors, mainly due to surface pressure decreasing over the Antarctic and therefore increasing in the mid-latitudes. With the stronger westerlies moving further south, they also propell the Antarctic Circumpolar Current – the world’s strongest current running West to East at about 60ºS. We will thus probably see the fleet being pushed through the Drake Passage with unusual high speeds over ground.

If you would like to know more about this weather phenomenon, its impact on glaciers in Patagonia and Antarctic and thus the worldwide climate change, we recommend this article written by Bethan Davies.