Retired: 8 September 2022 – personal reasons
Edward retired on the 8th of September and headed back to Les Sables-d’Olonne after 4 days of racing. Noah’s Jest and her skipper were both in good shape. He retired for personal reasons and is thinking about 2026.

Edward Walentynowicz fell in love with sea adventures as a young university student in Poland, where he started sailing on the Baltic Sea. What followed was training programs, ocean sailing, Polish Yacht Master Ocean, and Sailing Instructor certifications. Edward is not a professional sailor; he is a marine and industrial automation professional electrical engineer. Sailing is his live long hobby which started in 1974. He is entering GGR 2022 with over 67 000 nm sailing experience including 35 000 nm open ocean sailing and seven Atlantic crossings.

He has been inspired by footprints of Joshua Slocum in Nova Scotia. As Joshua’s first solo voyage started with a farewell from Sambro Light at Halifax approaches, Edward is frequently reminded of his idol, when he too sails out of Halifax Harbour. He always finds time to help sailors visiting Halifax by offering his advice and expertise and has assisted numerous skippers with weather routing.

His heavy weather sailing experience comes from several North Atlantic crossings on 30ft to 60ft sailboats, with two crossings accomplished without use of GPS. The two handed, nonstop North Atlantic double-crossing adventure, with rounding Eddystone Lighthouse on Acapella IV, was awarded ‘Recreational Event of The Year’ by the Canadian Yachting Association.

This avid sailor is always very professional, well prepared and possesses great planning skills. Edward hopes that taking on the GGR 2022 will be his next big challenge, and by employing his vast experience over the months of the race, he will grow both spiritually and mentally. His competitive nature, coupled with his hard-working attitude will make him a formidable challenger.

In the spring 2020 the boat started it’s first refit at Rustler Yachts Ltd. Falmouth, UK to be ready for her trip to Halifax, Nova Scotia, Canada. Unfortunately, it took much longer then planned.
Noah’s Jest was trapped in UK for over 14 months, due to Edward’s inability to retrieve her because of covid-19 travel restrictions.

Finally on April 11th, 2021, he had first opportunity to travel to UK to London and after, quarantine to Falmouth (UK).

Noah’s Jest was launched 2 weeks later and after short preparation Edward sailed to France arriving at Les Sables-d’Olonne on May 21st, 2021, after 378 miles solo trip on new for him Noah’s Jest.

In France he continued to prepare the boat for the return home, Atlantic crossing. New sails, which waited for a year, were delivered along with help from Jerome, the owner of Voilier Tarot, with whom Edward was able to install a new mast and rigging.

On the 16th of July he finally started on his trip home. It went on for several weeks in generally good weather and light winds. The weather pattern took him on southern route slightly below Azores islands. While he was sailing there, he was watching hurricane Henry’s development and he chose to stay South until Henry declared his pathway. It took seven more days before it was obvious that hurricane would make landfall on the US territory, and Edward was able to take path to Nova Scotia without meeting with Henry. He only hit remnants of the hurricane, with a 40 plus knots wind.

On August 30th, 2021, finally, his solo nonstop trip from Les Sables-d’Olonne, France to Halifax, Nova Scotia, Canada was accomplished, covering 3,850 nautical miles. This was a qualifier for GGR and with the 378 nm it is 4,228 nm long voyage.

Noah’s Jest is stored for winter 2021/2022, indoors at East River Shipyard in Nova Scotia, where Edward continues further refit of the boat.

There is a lot of work planned, which must be done before the end of April 2022, when he hopes to lunch the boat again and return to Halifax to prepare for another Atlantic crossing.

Edward hopes to be back in Les Sables-d’Olonne, France, by the end of June 2022. 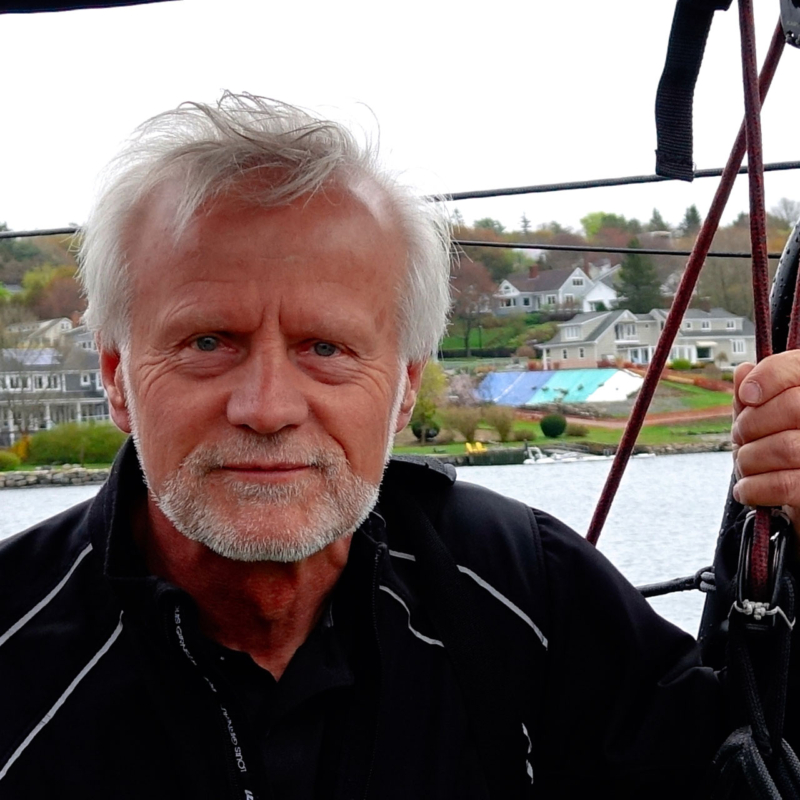