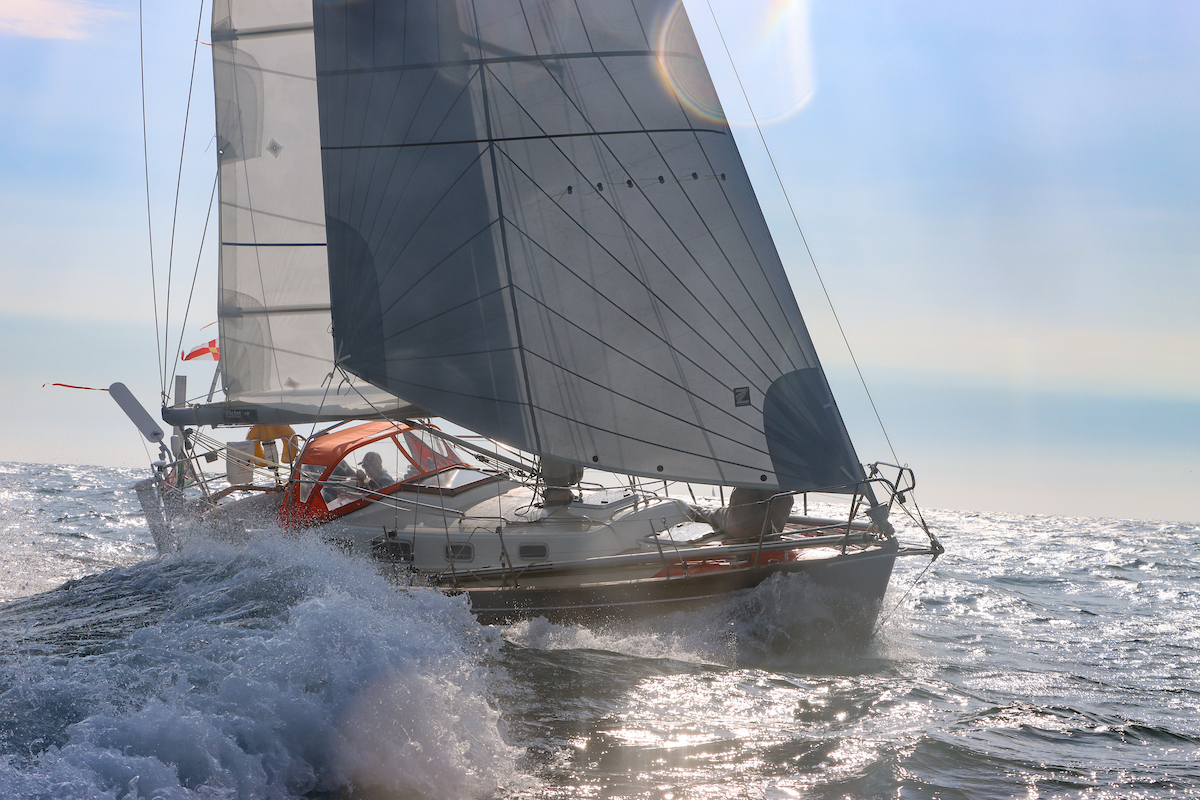 Picture Above: Jeremy Bagshaw’s well-sailed Olleanna, the smallest boat of the fleet, has been holding her own against bigger, faster boats. Photo: Nora Havel/GGR2022

Following weeks of upwind sailing out of Europe, and a nerve-racking doldrum experience, the fleet was desperate for beam reaching trade winds to Trindade and on to Cape Town.  Instead, some have been sailing upwind in confused seas and low 30° temperatures since crossing the equator, not a friendly welcome to the south!

Simon Curwen (UK) is holding his lead over the rest of the fleet, albeit with a broken genoa halyard that will require a stop at Trindade for repairs, since the sea state does not make mast-climbing a viable option. The man of the week is Abhilash Tomy (IND) who has consistently posted the best performance all week, including several best 24-hour distances, and taking the absolute 7-day distance fleet record, gaining 210 miles over Simon!

The first five entrants will converge towards Trindade over the weekend, but they cannot turn left to Cape Town, blocked by strong easterly winds. To try would take them into headwinds for a slow and painful 2600-mile crossing to Cape Town. On paper, the best route to Cape Town for centuries has been to go south of the South Atlantic High and shoot downwind towards the Cape of Good Hope into the Indian Ocean.

That’s on paper though…  The centre of the current high lay today around 10°W 40°S, a whole 1200 miles south of Trindade Island and will be pushed east leaving a trail of light winds behind. Meanwhile a low-pressure system will push north mid next week. In short, it’s a mess with unstable winds and difficult predictions for the sailors.

To get to the bottom of the high and ensure downwind conditions, sailors would have to push south to the roaring 40’s, another 1200-nautical mile, or an extra 10 ten days. Weather information will be vital. Weather fax maps (should they get one off the coast of Brazil), barometric pressure and wind direction can help to make their critical decision on when to turn left. Even then, they have no guarantee of finding the conditions they are looking for.

Don McIntyre, Founder and President of the Golden Globe Race:

It’s decision time next week for the leaders, they all know the best way is to get around the South Atlantic High, it’s what we did in the BOC Challenge and what other Round The World Races are doing, but where is it? Conditions are very unstable and the high is not very strong. The speed of the GGR yachts cannot compensate fast changing systems, there will be a lot of surprises and opportunities between Trindade and Cape Town.

The leaders will not be favoured by those unstable conditions. It opens an opportunity for Damien Guillou (FRA), now working his way between the mid-fleet pack and the five leaders. His strategy for sure is to get south of the high and slingshot to South Africa. So far, he is not impressed with the Southern Hemisphere conditions:

The Southern Trade Winds have not kept their promise: I’m upwind in very unpleasant, confused and crossed seas, so I’m trying not to get too close-hauled to keep the boat going through the waves. I can’t open the hatches because of the waves, so the heat is unbearable inside. I’m looking forward to downwind sailing, but I would settle for a beam reach!

Only Kirsten Neuschäfer (SA) has taken a closer coastal route to get the current along the coast of Brazil and is not planning to see Trindade. She has spent more time in the South Atlantic than the rest of the fleet combined on Skip Novak’s Pelagic which could well make a difference there:

I am a bit more west than I would have liked, but I’m happy with my position, although I’m sad I might not see Trindade. I have not received weather information since the Canaries and saw very few boats. I will try to get a weather fax map in Rio to get a position for the South Atlantic High and will try to wing it!

Guy Waites (UK) is leaving the Northern Hemisphere with gooseneck barnacles hanging on but celebrating his equator crossing with Champagne, offered by French friends he thanked in a heartfelt tweet . Now, only three boats remain in the Northern Hemisphere. Ian Herbert-Jones (UK) on Puffin is in good spirits despite slow progress and failing mainsail batten luff cars. He has accepted his doldrum experience will be longer than expected. Arnaud Gaist (FRA) is managing the doldrums well, mentally and sailing wise, closing the gap to the fleet and may not be the last sailor to cross south. Watch this space!

Elliott Smith (USA) on the other hand went down both in the rankings and in morale after another week of slow progress east of the fleet, a dramatic change from the enlightened experience he had between France and the Canaries.

He shared his frustration on the weekly satellite call, and despair at finding his two spare compasses were broken during transportation in their package, while his main compass is not functioning correctly. He is now relying on a handheld compass for the next seven months!

Fortunately, Elliot is the first of the three tailenders to get a small low-pressure system crossing their route from east to west before the weekend, bringing sustained southerlies and possibly their lucky escape through the equator!

The variable conditions from the strong headwinds in the Bay of Biscay, trade winds towards the African coastline, and light, shifty winds in the doldrums have shown that very different boats can lead to similar performances.

The first lesson we have from this comparison of the best performing yachts is that maximum waterline length in a fleet competing in real time is important. All the leading yachts are at 36 feet LOA but LWL varies. Tapio’s Gaia 36 LWL increases as soon as he moves with his low aft overhang. Kirsten has the longest and Simon is performing better than the boat should (preparation, skipper skills and sails make a difference).

Smaller yachts like the Tradewind 35, Lello 34, Barbican 33 and OE32 have not been able to follow the pace of the larger yachts with longer dynamic LWL, never posting a 24-hour distance over 160 nm. Guy Waites shared earlier with the GGR Race Control that while in racing mode, his Tradewind 35 could not keep up with the pace of Ertan Beskardes‘ Rustler 36 in a more cruising mode and had to take a different option.

The fastest boats in the fleet, posting the most 24-hour distance records are Kirsten Neuschäfer‘s Cape George, Tapio Lehtinen’s Gaia, and Abhilash Tomy/Damien Guillou‘s Rustlers all over 170 miles/day and have rather different features. The Cape George being by far the heaviest but most powerful yacht which has the potential to run away in the Southern Ocean! The Rustler is more nimble with a better sail area/displacement ratio, and the Gaia having the lowest sail area but narrower with less wetted area and a better, heavier, deeper keel.

Interestingly neither Simon Curwen‘s Biscay and Pat Lawless‘ Saga who have consistently sailed at the front of the fleet have not posted any of the top speeds and have never sailed over 165 miles in 24 hours. They are however easier to sail fast and have better average speeds, as well as doing well in heavy conditions.

In the end, those designs are giving the famed Rustlers a run for their money, but the better all-round performance in all points of sail and wind conditions make them an easy choice. Having said that, GGR 2018 winner Jean-Luc Van den Heede shared with us before the start that he would probably choose a Gaia 36, if he were going around one more time, which is no other than a long-keel Swan 36.