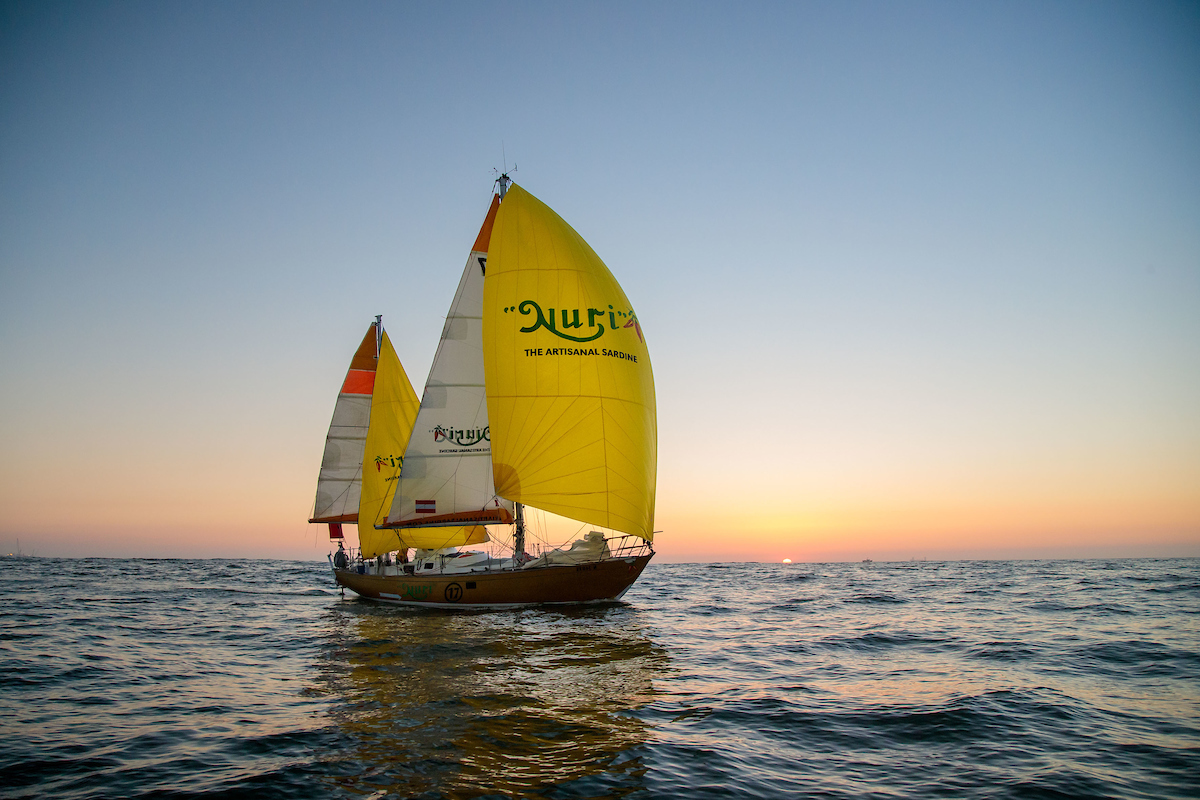 One month at sea and what a month it’s been!

Starting with a rough exit of the bay of Biscay, testing sailors and boats to the limit, with Damien Guillou’s (FR) PRB returning for repairs, Edward Walentynowicz (CAN) pulling the plug on his GGR campaign, Guy deBoer (USA) grounded in Fuerteventura and Mark Sinclair (AUS) mooring his Coconut in Lanzarote for good. Now thirteen sailors battle the doldrums seeking tradewinds and a fast passage south.

Simon Curwen (UK) crossed the equator last night knowing he was still in the lead, and planned a proper “crossing the line” celebration with Neptune.

We’re going to eat together and I’m going to open a bottle of champagne. We have to celebrate this. It is a British tradition. You have to offer something to Neptune, the god of the seas…

Simon, who does not have the fastest boat, took the lead in Cape Finisterre on September 9th and has held it ever since. The experienced solo sailor seemed unfazed by the ordeal as he saw his lead melting below 100 miles in the doldrums. His experience campaigning his J/105 Voador short-handed for 15 years, and many years racing his Classe Mini 6.50  before that, has certainly come in handy.

First into the tradewinds, he is now trucking at 5 knots on a direct route towards Trindade Island in his south, the next rounding mark which he should reach in 10 days. He remains in good spirits, enjoying his time at sea.

I’m quite happy to be alone with myself. I have music and books to read. Friends gave me tapes and I took things I listened to when I was 20. Like Led Zeppelin and the Beatles. It’s good to listen to this music again. (…) So far, it’s going well. I’m not bored at all. There’s always work to be done. I spend two hours a day on the charts and the sextant, to do the calculations. I also have to look after the sails before heading south. And sometimes you spend an enormous amount of time just looking at things.

Not all the fleet, however, has been dealing equally well with the lack of wind, lack of communications, lack of information and prolonged isolation. Don and the GGR team at Race Control have felt it during the scheduled weekly satellite safety calls. Entrants can only call Race Control, not family and friends. Some demoralised GGR sailors called to chat, share their frustrations and trump the isolation after a month alone. A few are questioning why they are there, others if it is even possible to continue with severe lack of family contact.

The entrants, who felt overloaded with public and media attention in the weeks leading to the start, now welcome the weekly safety and media calls as a change in their routine and only chance to chat to the outside world.

The GGR skippers are having slightly more contact with the outside world than their 1968 counterparts. Part of this is safety, like the compulsory daily tweet to race management, but also to help share their experience at sea with the public and GGR followers, like the newly introduced weekly media calls where a news organisation can call them for an exclusive interview.

Don McIntyre, Founder and President of the Golden Globe Race

The difference with 1968 is that back then people did not have the constant noise and fast communications of today, so did not miss it. Sailors were even worse off back then and could not communicate other than throwing letters and films on passing ships, or going into specific places like the Canaries, Cape Town, Australia or New Zealand. The Golden Globe Race is re-creating those letter and film drops.

The instant communications and gratifications we have in the modern world, makes the isolation of entrants all the more intense, and sometimes painful, which is why we allow the voluntary calls to GGR Race Control.

When the mind is strong, sometimes it’s the body that gives-up. Guy Waites (UK) who had an otherwise good week of sailing is facing swelling legs and ankles due to the humidity and lack of walking exercise. Michael Guggenberger (AT) is also looking after his swollen feet, as well as hands and knees, damaged by the humidity and hard work.

I’m dancing a lot on board to keep fit and cure my ailments!

Pat Lawless (IE) thinks he broke a rib when shoved across the cockpit.

I had an accident, the mainsheet caught me in the shoulder and threw me inside the cockpit, it was four days ago and I have had a sore rib since. The shoulder must have a torn ligament, but it’s slowly improving.

When your mind and body are fine, sometimes it’s the boat that is causing problems as South African entrant Jeremy Bagshaw found out.

Jeremy is happy at sea and has not hurt himself since climbing the mast in Les Sables d’Olonne, but was finding Oleanna sluggish as Damien was catching up. During a calm he decided to dive on the hull to check the coppercoat antifouling only to discover with horror that 70% of his hull was covered with gooseneck barnacles!

I checked the hull in Spain arriving from South Africa, and again in Les Sables d’Olonne before the start, and all was fine. Two days after the Lanzarote film drop I dove in again and had seen nothing. Yesterday, just two weeks later I was shocked to discover 2 cm long barnacles colonising the hull. Fortunately I’ve been able to get rid of them all.

This is obviously a staunch reminder of Tapio Lehtinen’s (FIN) ordeal in the 2018 who discovered in the Indian Ocean that his Asteria was covered with Barnacles. He refused to dive for fear of sharks and was not allowed to scrape his hull in Australian territorial waters. He completed his round the world tour in 322 days, being last to finish, and earning the nickname of ‘Captain Barnacles‘.

Tapio is not slowed by barnacles this time. Not only has he been challenging Kirsten’s second place all week, but he also has the second best 24-hour distance with 174.19 nautical miles! This morning, as he sat in the cockpit eating his porridge, he saw another sail a few miles away. It was Pat Lawless. A fun duel began immediately. Tapio was covering him all morning, hurting his elbow in the process but having the most fun in weeks! It shows how intense the fight is at the forefront of the fleet, even in the middle of the empty ocean.

So far only Jeremy has seen the dreaded barnacles, but other unsuspecting sailors may be impacted. The calms of the doldrums are the last place they can swim and check their hull before venturing in the southern hemisphere trade winds. Let’s hope they will!

A minority, like Simon, are happy at sea, in good physical condition and sailing fast. This definitely is the case this week for Kirsten Neuschäfer (SA) whose laconic daily tweets suggest she is not in need of communications!

It was difficult to concentrate on preparing for such a big trip while having a lot of public and media interest, as well as attending events. I’ve really enjoyed my solitude, and I’ve had some really adrenaline-fuelled moments, like helming the boat through squalls with the gennaker where it was a really a bit on the edge because we were in a situation where I didn’t have the nerve to leave the tiller, so those were pretty exhilarating moments.

Kirsten, who exited the bay of Biscay in 9th position, has been consistently posting the best 24-hour distances and holds the fleet record at 174.73 nm per day, allowing her to get back to second position this morning.

I don’t know where I am in the fleet and actually prefer not knowing where the others are, and just enjoy sailing. I also enjoy not having the GPS and sailing with all the instruments off the boat.

Another sailor not suffering mentally or physically, and working hard to get back at the front is French favourite Damien Guillou, who has been gaining places ever since he left Les Sables d’Olonne with a 6-day delay after repairing and reinforcing his windvane.  He has gone from last to 6th, leading the mid-fleet pack earlier this week, although the doldrums make the ranking change several times a day.

With people around me, I’m in a racing mindset. A cruising boat is not relaxing when you work it like a racing boat. We’ve been away for a month” Said Damien “There are at least five (six- Editor) more to go… The wind will soon change. Even if we don’t have the weather information on board, the St Helena high (a.k.a. South Atlantic high) can generate huge gaps.

Many wonder if the obvious speed, talent, hard work and determination of the Finisterian sailor that enabled his comeback will be enough to catch-up on Simon and the leaders. Michel Desjoyeaux who won his second victory on the 2008-2009 Vendée Globe, after going back to Les Sables d’Olonne, 200 miles after the start, for repairs and leaving with a 40-hour delay, gave us a hint on twitter earlier this week :

He is doing a “Desjoyeaux’, only better! If you don’t mind me saying it!

Of course we don’t, Professeur!