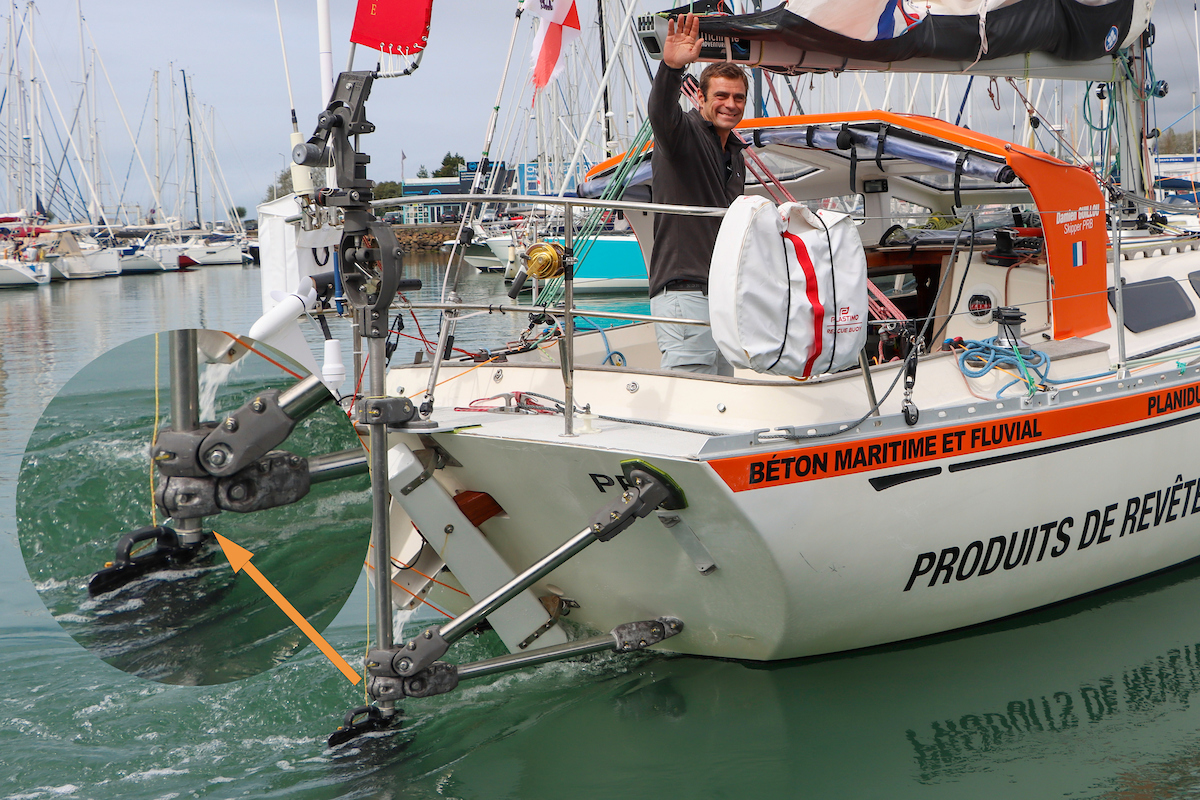 Picture Above: PRB’s windvane stainless shaft snapped at the rudder level. Damien has all the spares onboard but needs flat seas to repair. Photo Credit: Nora Havel/GGR2022

Cards are reshuffled and more breakage as the South Atlantic starts testing boats and sailors on their way to the Southern Ocean, and the next film drop in Cape Town.

The southern hemisphere has not been overly welcoming, and the fleet has been consistently in confused seas over 4 metres and winds averaging 15 to 20 knots with occasional gusts to 40.  Boats and sailors have taken a toll with several sailors injured, and a few boats needing repairs.

Damien Guillou (FRA) called Golden Globe Race control today to advise that the stainless steel rudder shaft of his wind vane broke at the top of the rudder. The Rudder was secured by a safety line so was not lost. Damien continues sailing upwind for now without self steering. He has a complete spare rudder shaft which will need replacing. He must remove the main transmission gear of the unit, pulling the broken shaft out and then sliding a new shaft in before replacing the main gear. Not an easy job! Then he will have to go over the side to replace the rudder.

He says he can do it, but the conditions are not favourable at the moment. This type of damage is very unusual for a Hydrovane unit and the local agent has suggested it may be the first such break in the history of the units. All but two of the GGR entrants use the same gear. It is a mystery break as this shaft is very strong. It is the second windvane problem Damien has experienced. He returned to the Les Sables d’Olonne to repair and strengthen the mounting system, setting off six days behind the fleet.

Damien was disappointed and wondered if the break was caused by driving too hard? It may be many days before conditions improve to allow a repair. He knows he is approaching the high-pressure system and will aim for flat waters for repairs, or alternatively to Tristan da Cunha.

He also knows where Kirsten and Abhilash are, and how he is doing compared to them, very eager to get back in the game. In real terms he has only gained 70 miles on the leader (currently 480 miles ahead) since Cape Finistere weeks ago, but passed many of the slower boats. In the next few days however his fortunes may change, with the wind shifting more north allowing him to turn east for Cape Town and saving him a few days sailing south which the current leaders have had to do.

Simon Curwen (UK) who was the first to exit the doldrums, broke his genoa halyard early in the Southern Ocean and decided to shelter from the wind and seas off the coast on Trindade island. There he went up the mast  to repair, to no avail, hurting himself in the process. He finally decided to continue with his removable forestay to Cape Town and look for shelter there and repair before heading into the Indian ocean.

I got a bit bashed, there’s not enough shelter behind this small island! I was hove-to and got up the mast for a couple of hours. On the way down my bosun’s chair started falling apart, I had to cut myself free and free-climb my way down the rest of it.

Abhilash Tomy (IND) who kept in touch with the lead all week had a gas leak which is now repaired, and Pat Lawless (IRL) had a solent halyard snap last night in 40 knots squalls. He switched sails as explained in his daily tweet, and will repair his halyard later when the conditions ease. Ertan Beskardes (UK) still can’t store power in his batteries but is happy to be sailing in fresh winds. Ian Herbert-Jones (UK) repaired his mainsail battens and Elliott Smith (USA) is suffering major deck/hull leaks from starboard on this long, windy port tack to Trindade

The South Atlantic High is playing tricks on the lead of the fleet. While Simon and Abhilash had to go all the way down below 30° south to find easing winds, enabling a more easterly route towards Cape Town, it hasn’t been the case for those following!

Tapio Lehtinen, 250 miles north of Simon, took a more easterly route right after Trindade, getting closer to Cape Town, stealing first spot from Simon and leading the fleet towards South Africa! Damien Guillou (FRA) did the same trick another 250 miles back and took 4th position stealing both the spots of Kirsten Neuchäfer (RSA) and Abhilash Tomy (IND) places in the process!

Tapio told us during his weekly call.

It’s great here, the sailing conditions couldn’t be better, I don’t understand why we don’t always sail in this latitude! I know that the high pressure is approaching and conditions might be tricky later on, but for the moment It’s absolutely perfect weather!

Today the leaderboard is showing Tapio 1st, Simon 2nd, Pat 3rd , Damien 4th,  and to the west of them Abhilash 5th and Kirsten 6th , but this is only half of the story.

The tracker is calculating the distance to the next waypoint to the east in South Africa, but for now you need to go south for a commanding position. The leaderboard does not take the meteorological reality into account. In the next four days the reality will start to show and the leaderboard will change

Don McIntyre, Founder and President of the GGR

Simon Curwen (UK) and Tapio Lehtinen (FIN) who are further south and east are the first ones to get easing winds and alter course, making headway towards Cape town, meanwhile the west position of Abhilash Tomy (IND) and Kirsten Neuschäfer (RSA) penalises them in the distance to the next mark in Cape Town, and with Damien Guillou (FRA) who kept a straight route as easterly as possible right after rounding Trindade.

With the high-pressure system moving northeast quickly, it means that the latest to round Trindade will be able to cut corners and take a shorter route towards Cape Town. This is especially true for Damien Guillou, Ertan Beskardes (UK), Michael Guggenberger (AUT) and Jeremy Bagshaw (RSA). After them, the situation will be different and harder to predict.

None of the entrants have been able to print a decent Weatherfax chart so relying on their on-board tool and observations, looking how the barometric pressure rises and the wind direction and strength is easing to position the South Atlantic High.

I’ve given up on Rio after trying so many times, but I am starting to get weather forecasts from South Africa, so I may be able to get some weatherfax from them at some point.

With their limited access to information, the sailors know where they are and can position themselves compared to the others as they talk to on the SSB radio.

North of the Trindade mark, sailors have been doing well and curiously enjoying their wet, upwind ride South after suffering for so long in the doldrums. Ian Herbert-Jones (UK) is delighted with the progress and has definitely felt the pressure coming from Arnaud Gaist (FRA) who briefly overtook him while exiting the doldrums.  Elliott Smith (USA) has been consistently posting daily averages over 140 miles, breaking his own personal record of 159 miles on monday, and possibly working on his 7-day record, but more importantly back to his normal self after a very tough doldrum experience.

Guy Waites (UK) and Jeremy Bagshaw (RSA) are still in rough conditions, with 20 knots gusting to 40 on the nose and 4 to 5-metre waves in confused seas. They are happy at sea, all systems working and feeling comfortable but both feel their boats a bit more sluggish than they should, a sign that barnacles are back as Jeremy explains in his call and Guy in his tweet.

Good look underneath in a brief calm, Sagarmatha is covered in a field of goose barnacles.

Currently rounding Trindade, Ertan Beskardes (UK) is also in good spirits despite adverse conditions and unaware he is 7th to Kirsten in a favourable position. Further west Michael Guggenberger (AUT) is having a blast on his ketch-rigged Nuri:

What I found out spending time with Nuri, is how little sail can you fly and get the best speed out of it. I am sailing the boat very differently compared to 10 days ago. I put as little sail as possible to stay very upright and get very good speed out of it, it’s surprising how good this works.

He may have made the most important discovery of the race so far, and has been consistently breaking his 7-day personal record this week  with 1024 miles -the 4th best week in the fleet since the start- and breaking his personal 24-hour record with 155 nm, only  9 miles shy of Simon’s personal best!

Most of the sailors will be through the Trindade mark in the next 7 days, but the Southern Atlantic weather system still has a few surprises in stock for the fleet over the next few days.

Expect more changes in front of the fleet!