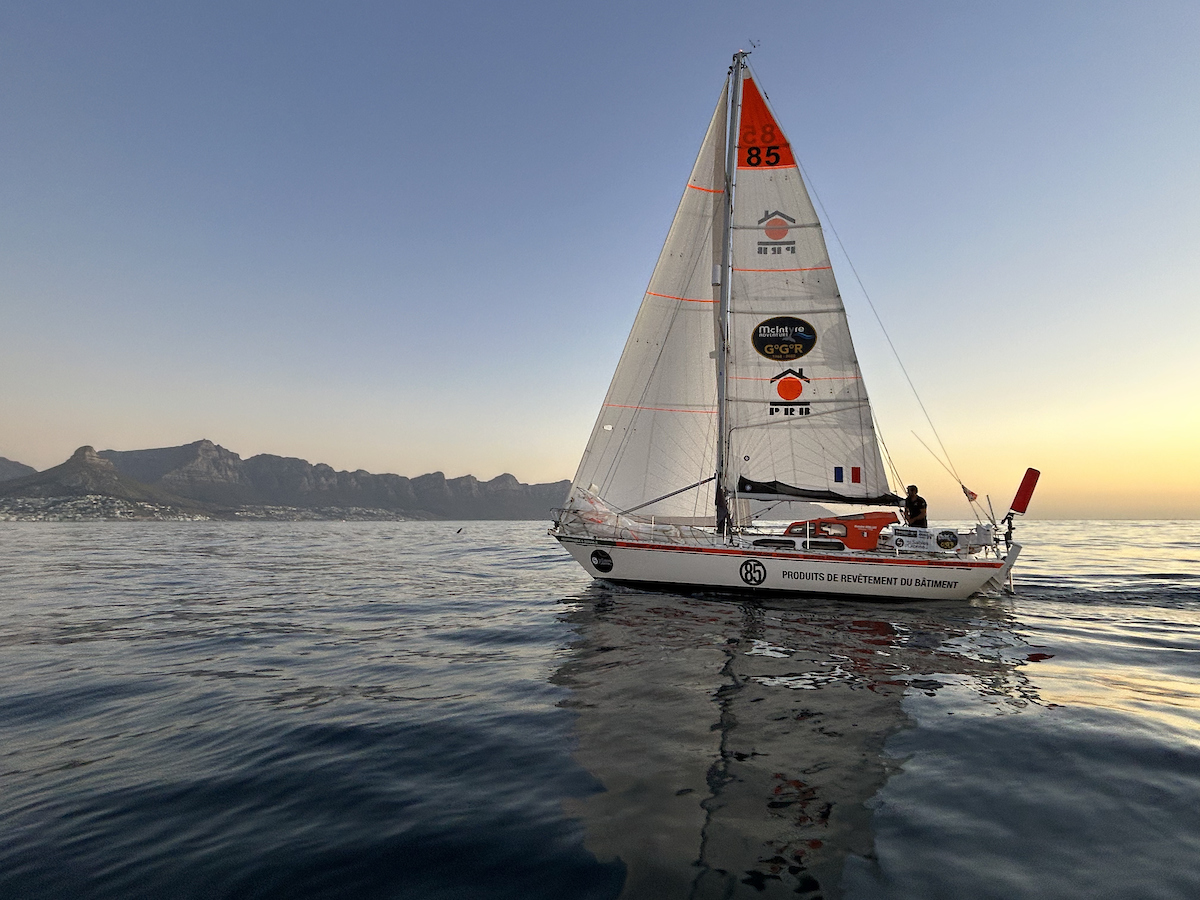 Picture Above: Damien Guillou ( PRB) has shown incredible capacity to face problems, and fight his way back to the top. He will be missed by both the entrants and public. Picture Credit: Riaan Smit / GGR2022

Damien Guillou arrived in Cape Town this monday having lost his windvane rudder.

Pat Lawless retired on November 10th after the failure of a critical bearing bush, caught without a spare.

Both sailors did not wish to continue after repairs in port.

Pat Lawless (IRL), who had been struggling with his failing Aries wind vane for days, arrived at Cape Town sailing sheet to tiller on the 10th of November

Hailing from a family of seafarers, his father circumnavigated the globe solo in his 70’s, while his brother Peter also attempted it. Pat’s goal was to become the first Irishman to sail solo, non-stop, unassisted around the world. Without a self steering system he was unable to achieve his dream. He could have made repairs and continued the voyage under Chichester Class as a one stop circumnavigation, but decided to retire.

Pat had a life in the North Sea as a fisherman, a past that overshadowed his skill as a dinghy sailor and offshore racer. His experience became obvious as Pat remained in the lead pack all the way to Cape Town which he reached in 4th place.

Meanwhile, he has been managing injuries, a knee infection in the North Atlantic and later a cracked rib and torn shoulder muscle, never departing from his infectious enthusiasm and happiness at sea!

Pat’s Aries windvane had several thousand miles on her, and was serviced before starting the race, but not a full rebuild of bearings and bushings. The headed bush on the spindle shaft that the servo pendulum rudder swings on failed.. A fix at sea, while difficult, is possible but only if you have the spares. He did not have them.

He is planning to sail back home as soon as repairs are completed. The Irish competitive sailor is looking forward to cruising time going north, with the opportunity this time to visit the islands and archipelagos he just sailed by on the way south to Cape Town.

The Finistère sailor was in 3rd position, following a dashing option at the coast while waiting for the wind shift, when he lost the rudder on his Hydrovane.

I was doing fine, in the zone, in harmony with the boat, I didn’t know my ranking but I knew I was in a good position.

Winner of the Prologue Race before the start in Les Sables d’olonne, and one of the favourites for the event, he was a great fixture of the GGR. He was leading the GGR in the Bay of Biscay, But had to return to Les Sables d’Olonne to repair a bolt that broke on his wind vane mount, and left 6 days later in last position. He went on to catch-up with the skippers one by one to regain contact with the leaders.

Rounding Trindade in Brazil, he made up more ground on the forerunners, notably the leader Simon, as he passed the island, sailing less distance. On the 20th of October he broke the rudder shaft of his Hydrovane, as a result of modifications made before the start. He made repairs at sea in difficult conditions before crossing the Cape Town gate in 5th position.

Last Saturday, as he was in 3rd place on the rhumb line, another modification failed when the machine screws fixing his spare rudder blade to the shaft came loose. The rudder slipped off and the safety line was not secured. The rudder blade was lost forcing Damien, with no spare, to make his way towards Cape Town.

Damien, who has a successful career as a Figaro racer and IMOCA préparateur, is a competitor. He does not wish to continue in Chichester class.

Psychologically it’s too hard, I can’t get back out without racing in the rankings. I’ve had problems three times, and when these things happen, you can’t force fate. You have to be sensible and stop the race.

Thousands of Hydrovanes are currently used around the world, with no major or frequent breakages, the supplier has upgraded the materials used for the pin and the shaft which is 32mm Super Duplex Ferrinox 255 stainless steel since 2009.

GGR 2026 will require that any modification to a windvane system, regardless of brand, be submitted to the manufacturer and the GGR for their feedback and comments beforehand.

With Pat and Damien out of the race, the GGR has lost two great sailors with big following whom we were a delight to check on the tracker. They were always inviting themselves to the forefront of the fleet! We want to thank Green Rebel, a leader in renewable energy, and PRB, a historic Vendée company and sailing sponsor for supporting those talented sailors and great ambassadors for our sport and their home countries. The GGR is a race of attrition and there may be more to come.

With the fleet split between the South Atlantic and the Southern Oceans, unstable weather systems are hampering progress on both ends of the fleet

In the roaring 40s , Simon Curwen (UK) has enjoyed the mixed tape of music and messages from family and friends specially made for the Cape of Good Hope by his daughter Nikki Curwen. He also is getting his first taste of Southern Ocean experience with temperatures seriously going down and winds over 50 knots, expecting another gale as shared in his weekly call on Monday.

I am tidying the boat to make sure there’s not too much to throw around, and on the deck to make sure I have the right sails ready to use and that everything is in order. For the last gale I was a bit worried I was going to be blown over the 44S of latitude, but it turned out I could head into the wind during most of the Northerlies.

Behind him, Tapio Lehtinen (FIN) is having a blast in the light or heavy conditions encountered as he mentioned in his tweet, and has been going away from the others, pulling 100 miles on Kirsten Neuchafer (RSA) and 200 miles on Abhilash Tomy (IND), after him on the same latitude. Meanwhile Southern Ocean newbie Michael Guggenberger (AUT) is struggling to get back in the zone.

In the Atlantic it’s a different weather issue. The South Atlantic High has not materialised, and the wind is unstable both in speed and direction, but the low-pressure systems travelling east are bringing downwind conditions towards Cape Town to the most southern sailors. Ian Herbert-Jones (UK), Elliott Smith (USA) and Jeremy Bagshaw (RSA) are clocking the biggest mileage. Jeremy is expected in Cape Town on Thursday and Ertan Beskardes on Wednesday, while Guy Waites (UK) closing the fleet plagued by barnacles takes a day at a time and has a plan as explained in his weekly call. Guy Waites, Arnaud Gaist and Ian Herbert-Jones are all worried about sailing through the Hobart gate which closes on January 31st. They have each been hit by various challenges, the biggest, lack of wind!