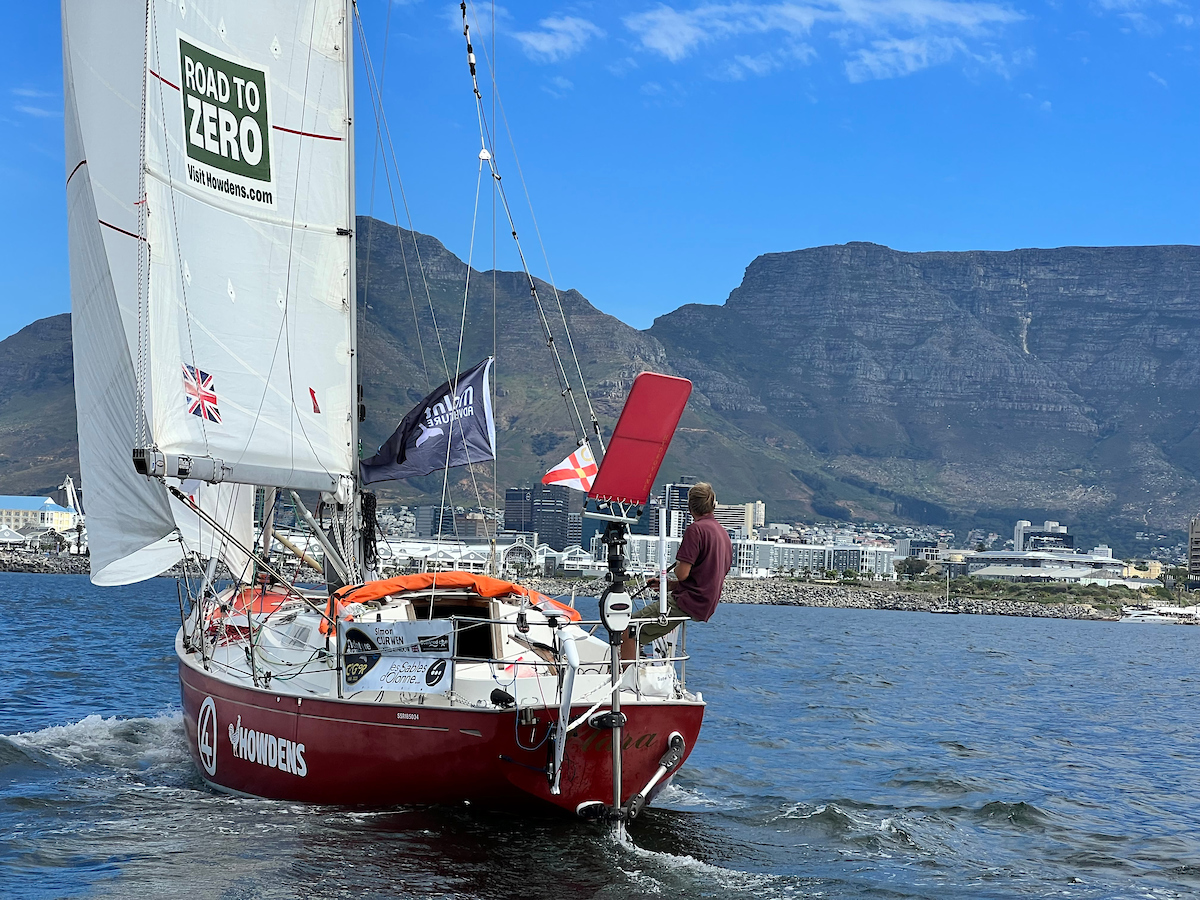 Picture Above: Simon Curwen (UK) on Clara / Howdens was first to the Cape Town Photo Gate, which he crossed at on Sunday 6th of November. Photo Credit:Aïda Valceanu /GGR2022

Dreams shattered for a $20 part, some too slow to finish the challenge, others living life to the extreme and loving it , while a few are troubled by the mind game that is the Golden Globe. The challenges are building as the fleet moves out of the South Atlantic and contemplates the Southern Ocean on their doorstep! The stories are rich, but just as it was in 1968 and 2018, who will sail past the first Cape?

Simon Curwen (UK) on Clara / Howdens was first to the Cape Town Photo Gate, which he crossed at on Sunday 6th of November. The British sailors who had not been able to communicate with the rest of the fleet, possibly due to a faulty  SSB radio installation, was happy to see people greeting him in Granger bay. During the live interview, he was surprised and delighted to learn he was still in first position and told the Team he was keen to go South!

Bill King and Loïck Fougeron did not make it past Cape Town in 1968, and five 2018 entrants, so I’m very happy to be here and very impatient to go in the South. It has not been too hard so far, as we had manageable winds, but it’s gonna be very different now. (…) I am OK at sea, the only things I miss are people, my family, friends and the other entrants. The only contacts I’ve had were with passing ships which is rather limited.

Simon went up the mast again for 3 hours and sorted his halyard issues, disentangling the mouse line and replacing the genoa halyard, but unlike other entrants he has not found any barnacles on his hull. He had several (loads, he said) coats sprayed with Nautix A9000 self-polishing antifouling with copolymer, specially destined for long periods of use in heavy fouling areas.

With the first test of the Atlantic, the issues faced by the fleet have mostly been two fold. Barnacle invasion for the majority and various issues with wind vanes. Simon has had none of those, and apart from a broken halyard faced no significant issues, which is a testament to his good preparation and the simplicity of his choices. I am surprised however he did not get second halyard for foresails.

Don McIntyre, Founder and President of the Golden Globe Race

Kirsten Neuschäfer (RSA) and Tapio chose very different strategies in rounding the south Atlantic High, with Kirsten choosing the longer route and a very southern route to head to Cape Town the right way from the South. She has been covering more ground than Tapio Lehtinen (FIN) but arrived 5 miles before the GGR 2018 veteran, after sailing an extra 420 miles since Les Sables d’Olonne, or a 5% distance.

She has a few barnacles albeit using 3 coats of hard and 2 of ablative antifouling, cleaned one side of the hull and will be waiting for better conditions to do the other side.  Kirsten was excited to sail home and share this moment with her many friends and family on the water late at night, sharing an unusual amount of words in her daily tweet :

Despite their different routes and conditions, Kirsten has mostly been sailing downwind while Tapio was working his way close-hauled upwind, both sailors have enjoyed their Southern Atlantic sailing and their choice of boats. They can’t wait to get into the Southern Oceans!

Kirsten told the team on arrival:

I really am enjoying the Southern Ocean and stopped being too fussed about what my position is. Because I’m having such a good time, I almost don’t want this time to go by so quickly. (…) I really enjoy not having a GPS, because it forces me to be observant, I enjoy not having detailed weather forecasts because it forces me to think more, and because it’s a race and not a delivery, I like sailing the boat as fast as I possibly can!

Tapio Lehtinen, despite a thorough preparation with Jotun hard coating and ablative, has not been able to totally avoid the dreaded barnacles that cost him a hundred extra days in his 2018 GGR but not at the same scale since he counted 60 in 2022 against 3000 in 2018!

This year, Captain Barnacles was determined not to let the crustaceans ruin his round-the-world voyage. Overcoming his fear of sharks and the slightly disturbing thought of swimming alone in the ocean, Tapio did not hesitate to go overboard and get rid of them at the first opportunity!

It’s funny how I hadn’t sailed the boat for 3 years after the last race. After the start, I gradually got accustomed to her again and it was like continuing the previous race. I love being at sea and sailing her. (…) I know this gate is part of the race, but the proximity of land stresses me, I am a lot happier a hundred miles out.

Tapio shared with the team in Cape Town

It has not been the case for Pat Lawless (IRL) who has been facing both the barnacle invasion and a windvane issue. He solved the first one at the first opportunity, but his tweet indicates that he does not have the spares for his Aries windvane broken bearing. Should he stop in Cape Town for a replacement part and repair, he could always continue his voyage in Chichester Class and complete his circumnavigation.

Pat showed tremendous courage and seamanship in the Atlantic, always sailing in the front of the fleet, while addressing various injuries at sea, but his ultimate goal is to be the first Irishman to sail solo, unassisted, non-stop around the world. He has explained to Race Control today that he might retire from the race in Cape Town, should he not be able to continue unassisted towards his goal.

Battling out at close range for 5th place on the water are the first Rustler 36 in the capable hands of GGR Veteran Abhilash Tomy (IND) who lost big in the centre of the high pressure. His latest tweet suggests he is battling with the mind games of watching the leaders sail away and the others catching up.  Damien Guillou (FRA) who sorted his barnacles and windvane issues, escaped the high pressure and trucking in 25 knots of wind and big seas, being this morning the fastest in the fleet.

On the other Biscay 36 of the fleet, Michael Guggenberger (AUT) got rid of the barnacles, put the disco ball back together, and gave the “Rustler Brothers” a run for their money. He was posting similar speeds over the last week, and is expected in Cape town on Saturday.

For Estimated Times of Arrival  at the gates, our friend Jonathan Endersby added an ETA function based on average speeds that -while not taking coming weather conditions in consideration- gives a fair idea of their arrival times on the GGR Stats Website.

The second half of the fleet is facing a variety of issues, in addition to a problematic lack of wind for the back end.

Ertan Beskardes (UK) is managing the lack of news from his family that cost him his 2018 GGR, taking advantage of the traffic to talk to his family through passing ships. He too faced barnacle problems and dove several times to clean them off,  fixed minor issues with his hydrovane mounts, solved his electrical problems and recently repaired his mainsail traveller. He is in 25 to 30 westerly winds and big seas pushing him towards Cape Town.

Jeremy Bagshaw (RSA) is also doing the ‘South African slingshot’ south of the high pressure, heading south for more wind in order to land in Cape Town from the south. He has posted several days between 100 and 130 nm so the strategy is working well for him despite his barnacles luggage which he’s planning to leave at home. All seems good onboard Olleanna, apart from lack of water.

For the back end of the fleet, including Elliott Smith (USA) , Ian Herbert-Jones (UK), Arnaud Gaist (FRA) and Guy Waites (UK), it’s a lot more complicated as they are in very unstable winds, the lottery favours some one day, others another day, but they are mostly in light winds. Elliott is actually doing well, posting good daily distances, but lost his only spinnaker this week as he shared in his latest tweet:

learned a new trick last night.. how to make your only spinnaker become two sea anchors!

This is a critical issue. Not only will the front of the fleet make a bigger gap, diving in the Southern Oceans pushed by strong westerly winds and waves, but also to make the Hobart Gate in time!

To avoid sailors getting too late in the season at Cape Horn with significantly worse weather conditions, there is a time limit to cross the Hobart gate, although there is no time limit for the race itself.

The notice of race stipulates that a sailor arriving:

This is why Suhaili’s position is important on the GGR Tracker : if Suhaili is ahead of you, then you are late for the Hobart Gate. Most sailors have the log and positions of Bernard Moitessier and Robin Knox-Johnston during their 1968 Golden Globe, and know their own positions respective to theirs.

It is specially an issue for Arnaud Gaist ( FRA) who has the slowest boat in the fleet, and may not make the Hobart gate on time, since he will be making slow progress this week. Same for Guy Waites (UK), plagued by Bernacle problems and currently behind the French entrant. While Guy said in his weekly call that he would try by all means not to lift and end in Chichester Class, he still has a hard task with an uncertain outcome ahead.

Skipping the Cape Town gate to make time for Hobart is not a solution either, because missing a gate for speed issues will automatically put the sailor in Chichester Class. Any other subsequent stop, missed gate or rule infringement, would mean disqualification from the Golden Globe Race.

We knew the GGR entrants were racing against themselves rather than against one another, but now, the race against time is on…