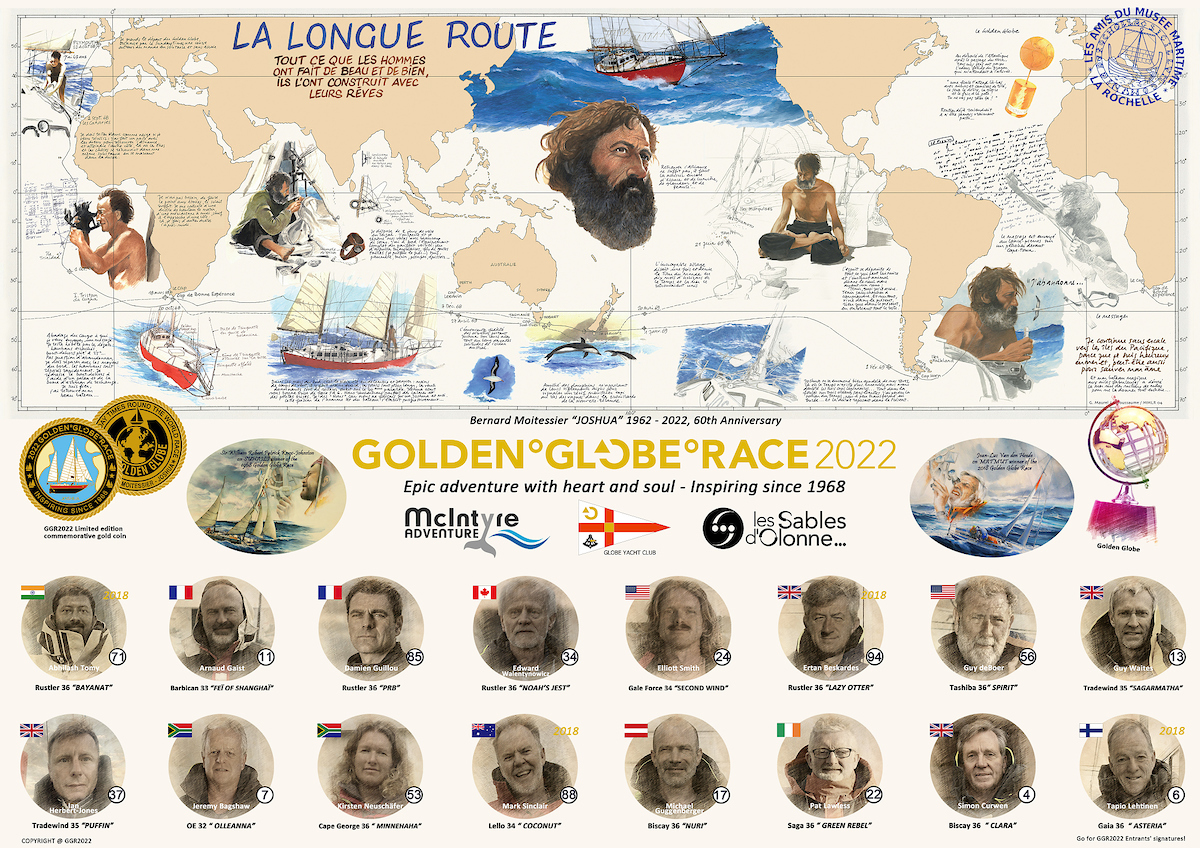 Sailors and their team managers are heading to the Asturian capital for the Prologue of the GGR from August 6 to 14, when they set-off in the “SITraN Challenge” to Les Sables d’Olonne, and the start of the 2022 GGR on Sept 4th.

The programme includes important safety briefings, and non-attendance will incur time and financial penalties. Some entrants are facing tough decisions in the coming weeks, with two more retiring.

The city of Gijón, host of the GGR prologue, is already welcoming entrants in its waters, while preparing for Semana Grande, the biggest summer festival of Asturias. Skippers and team managers will taste the legendary hospitality and gastronomic heritage of the Asturian capital in between briefings.

From the 32 original paid-up entries, 22 were originally headed to the start in France, but in the past six weeks, six entrants have retired, or been forced out through non-Compliance of the Notice of Race. 16 are now confirmed for the start, and two retired skippers fighting to get back into the Race.

Sailing around the world is hard but getting to the start for some is even harder. The GGR has some of the most stringent crew qualifications and safety regulations in the world. The remaining captains and their boats are of a very high standard.

It is unfortunate that a few entrants have had to drop out right at the last minute. The effort to get this far is extreme, but so too is our insistence on high standards.

What I would suggest though, is that we are not expecting as many dropouts sailing down to the equator as we experienced in 2018. This is a quality fleet.

Don McIntyre, Founder and President of the GGR

American entry Guy deBoer has not quite made it to Asturias yet, but landed in La Coruña, Galicia, Spain after a fast Atlantic crossing and qualifier in his Tashiba 36 Spirit, a testament to yacht designer Bob Perry, Guy’s team, and himself for an impressive maiden crossing.

I am a long-time international racing sailor but this 4000-mile solo passage was my first solo experience and I loved every bit of it and my boat. She is amazing and so far very reliable and fast!

He and the designer believe this design is up to 1000 miles faster around the world compared to a Rustler 36.

Others are leaving the British coast bound for Gijón. UK entry Guy Waites fitted a new mast and sails to his Tradewind 35 and left the next day. Ian Herbert-Jones from the UK set sail with new mast and engine, and Jeremy Bagshaw set off after engine repairs but 24hrs later discovered 20 litres of fuel in the bilge forcing him to return to Cornwall. He is now under pressure to make Gijón on time.

Les Sables d’Olonne, home of the GGR has seen a lot of activity: Mark Sinclair is rushing to finish his new engine installation, Edward Walentynowicz from Halifax has fitted all new rigging and coats of Antifouling, Simon Curwen from Brittany called in for a social visit, and French local sailor Arnaud Gaist is ready to go. Pat Lawless, arrived in Les Sables to pick-up safety gear after a week-long Irish send-off from his many passionate supporters along the south coast.

All are planning to leave in the coming days, while Damien Guillou on his Rustler 36 PRB plans to leave Port la Forêt on Thursday.

Meanwhile some are still out to sea, finishing their qualifier mileage: Elliott Smith who is two-thirds into his transatlantic crossing from Boston, must skip Gijón entirely, and accept the penalties. He has incredible growing support from friends and supporters who are organising and funding his remaining medical care training requirements with one-on-one instructors upon arrival in Les Sables. Abhilash Tomy is slowly completing his 2000-mile qualifier off the Bay of Biscay and will go straight to Gijón.

New Zealand sailor Graham Dalton retired from the GGR and now trying to get back in, is struggling to complete his 2000-mile qualifying sail in light winds making just 600 miles in the first week at sea and now running out of time. Spanish sailor Aleix Selles had not complied with important deadlines in the Notice of Race and was retired from the event on 27th July. He is now racing against time, to catch up and return to the GGR. Aleix started his 2000-mile solo qualifying voyage on Sunday 30th July and is yet to fit his new mast which is still not completed. Time is his biggest enemy with the start just less than five weeks away!

Finally, Canadian Gaurav Shinde was racing against the clock seriously behind schedule and about to set out on his first solo Atlantic crossing in his Baba 35 when he dislocated his shoulder. While recovering he completed his Medical Care course but had no time to arrive in LSO in time for the start and decided to retire from this edition, preparing instead for 2026.

The GGR organisation is also gearing up for the final stretch before the start, with the arrival of Nora Havel as photographer, Rob Havill as digital director, and Doug Dean as security manager. Marco Ausderau will provide logistical support and Maria Laykova will help the organiser, Les Sables d’Olonne, to set up the GGR area in the start village. GGR HQ has also been visited by the Bénévoles des Olonnes and the Bénévoles du Littoral Olonnais, two local organisations that have recruited 140 volunteers to support the city of Les Sables d’Olonne for the highlights of the Village and the start of the race from 20th August to 4th September.