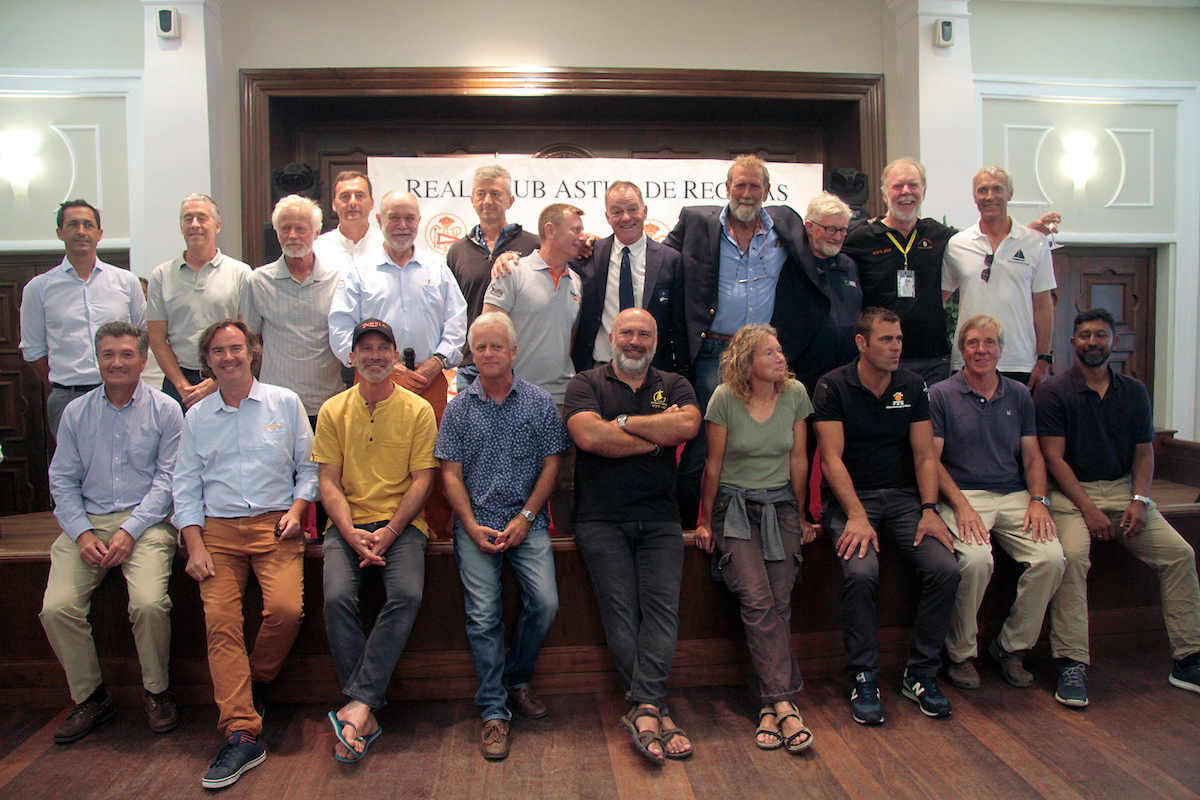 Picture above: The GGR participants and their team have received a warm welcome at the beautiful Real Club Astur de Regatas, of which they are honorary members for the Prologue week. Credit: RCAR.

It’s been a long time coming, but the skippers are finally sharing the same dock, drinks and stories of their preparations, while helping each other with final tasks. These solo sailors are definitely enjoying their social time in Spain!

The City of Gijón, the Gijón Tourism Office, the Real Astur Club de Regatas and the Puerto Deportivo de Gijón have been instrumental in making the skippers experience the legendary hospitality, maritime history and gastronomic tradition of the Asturian capital. Skippers have an occasion to gather with friends and family, sometimes flying from afar, to enjoy the summer festival of Semana Grande, a staple in the city’s cultural program, and visit the city and the surrounding areas of Asturias.

I have been here three times for the Figaro class and it is always a pleasure to return to Gijón.

It is also a great opportunity for the competitors to get to know the Bay of Biscay during the Prologue, as our circumnavigation will start and finish in this maritime area.

Others were delighted with the discovery of a city sitting across the bay of Biscay 230 nautical miles away from les Sables d’Olonne, popular with French sailors with many rallies and races coming to the Asturian city: Barquera, Trans-Gascogne, or Pornic-Gijón.

My first visit to Gijón leaves a lasting impression after just a few days. WOW! starting with warm smiles, colourful culture in a relaxed and diverse way, this has to be the perfect city for the GGR Prologue.

All involved can now settle down and relax before the grand adventure begins. So happy to be here!

All have received a warm welcome at the Real Club Astur de Regatas by the club’s President Alfredo Alegría Díaz, Commodore Guillermo Marqués Prendes, and many enthusiastic sailors from Asturias, Cantabria and the Basque Country who coincided at the Club for the prize giving ceremony of the Regata de  Aproches, who have been offering help and local knowledge to the participants throughout the weekend.

To have enjoyed the presence and exchange of experiences with GGR President Don McIntyre, the sailors and their support teams has been a pleasure for all of us, also because of the importance of the race, it is already part of the history of our Club.

Now we have the privilege of having their company in our city and in our Club until next Sunday, when we will give them the departure to their next destination in Les Sables-d’Olonne.

The week will continue with entrants finishing their boat preparation, attending safety briefings, video training for race media content and planned documentary, and the SITraN Challenge back to Les Sables d’Olonne for the opening of the Race Village on August 20th.

They will also discover more of Asturias with visits planned to the picturesque towns of Villaviciosa on the 10th at the Club Nautico Albatros, and Candás on the 12th where they will be welcomed by Amelia Fernández, Mayor of Carreño for a tour and their farewell dinner.

Gijón’s Mayor Ana Gonzalez will host on Thursday an official welcome reception and press conference for the sailors, team managers, and the GGR Team. Mr. Yannick Moreau, Mayor of les Sables d’Olonne will travel to Gijón to meet his Spanish counterpart and strengthen the links between the two coastal cities of the Bay of Biscay.

Meanwhile Aleix Selles and Graham Dalton are missing the Gijón festivities as they are completing their compulsory 2000-mile GGR qualifier in the hope of being reinstated in the race. They must be back to Les Sables in time for the Race village opening. Time is of the essence leading to the start, and neither of them has much to spare.

US entrant Elliott Smith has arrived to Les Sables d’Olonne from his maiden transatlantic crossing and GGR qualifier, but his agenda is filling up quickly with exotic destinations with yet to be completed compulsory training. He will travel to Cowes, UK to complete his survival training before heading towards Palma de Mallorca, Spain for his first Aid and STCW medical courses while his boat manager will get the yacht ship-shaped in Port Olona. We hope his passport is up-to-date!