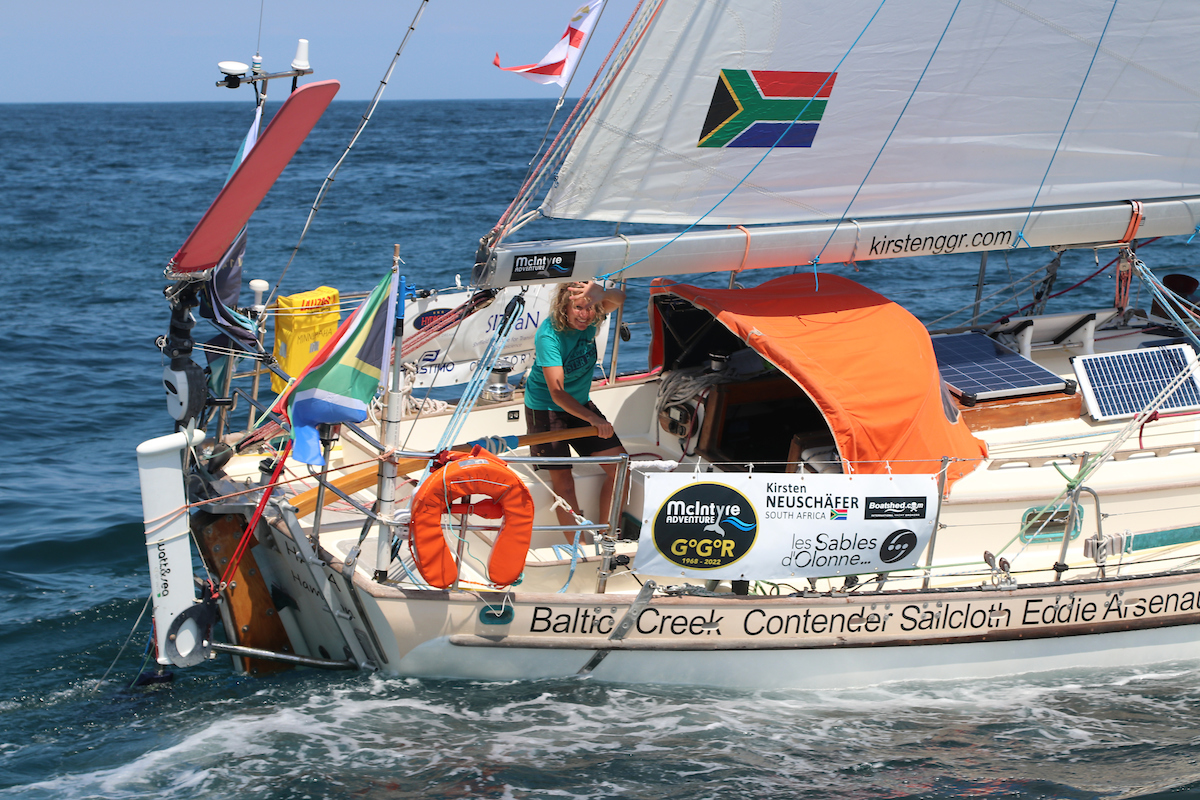 16 solo sailors set sail from Les Sables d’Olonne France two months ago to sail solo nonstop around the world in small 36ft yachts without modern technology using sextants, paper charts and wind up clocks. The leaders  are now in sight of Cape Town with the first arriving Sunday. All must pass through a compulsory ‘Photo Gate’ in Granger Bay to drop letters and video films before continuing on around the world without stopping.

Three entrants have already retired from the race, one grounding ashore onto rocks in the Canary Islands. Many are now infested with barnacles seriously slowing their speed and others are in need of repairs that cannot be carried out at sea. Two are running low on water. Some may need to anchor in Granger Bay to fix their problems. They cannot go ashore or seek any outside assistance or they will be penalised.

South African sailor Kirsten Neuschäfer from Port Elizabeth, the only female entrant, is sailing a strong race and is a serious contender for a podium finish in Les Sables d’Olonne. Her yacht is in great shape and she is excited to see family and friends as she sails past Cape Town.

Simon’s Town sailor Jeremy Bagshaw who entered the GGR on the smallest boat of the fleet and sailed his OE32 from Cape Town to Gijon and Les Sables d’Olonne in July is sailing a good race on the way back to South Africa, but is currently facing a barnacle invasion on the hull of Olleanna that he needs to solve before entering the Indian Ocean.

Entrants anchoring will probably be just off the foreshore at GRANGER BAY and easily visible to anyone on the foreshore. Cape Town sailors and friends visiting by boat are reminded that they cannot touch any boats, pass anything to any entrant or take anything from an entrant or they may be seriously penalised or even disqualified from the race. They are also under Customs, Immigration and Quarantine controls so make sure to respect the rules, thanks!

It has been an exciting week for the GGR with very close sailing between distinct strategies with the leader Simon Curwen (UK) and GGR 2018 veteran Tapio Lehtinen (FIN) picking the north side of the high-pressure system and South African sailor Kirsten Neuschäfer taking a daring option south of it in company of Pat Lawless (IRL).

ETA depends on the wind. LIVE positions are shown on the GGR satellite Tracker. ETAs will be regularly updated in the GGR Facebook page, and on the Royal Cape Yacht Club notice board, host of the Golden Globe Race in Cape Town. Current ETA’s are:

The GGR Cape Town film gate line is located between Granger Bay Marina GREEN entrance buoy [Q G 5M] and Cape Town Channel GREEN buoy ‘NO 1’ [G FL G 3S]. All entrants must cross this line with at least one reef in the mainsail and drop all headsails for 20 minutes.

Race Chairman Don McIntyre will be on the water with the GGR and Royal Cape Yacht Club Team to greet the skipper, collect the photo, video and written material, and interview them should the weather conditions allow. Nothing is given to the entrants.

The Golden Globe Race is a solo, non-stop, unassisted voyage around the world. This means the sailors cannot moor inside a harbour, or onto a pontoon, cannot accept a tow, any kind of assistance other than verbal or receive any material onboard, or risk being disqualified.

We therefore ask family, friends, media and spectator boats wishing to give a warm and well deserved welcome in Cape Town to keep a safe distance of at least one boat length with the GGR yacht at all times. The long-keel yachts have a big turning radius and the skippers will be tired from their approach.

We especially insist that spectators do not touch the GGR yachts, or give the skippers anything, as it could result in the sailor’s disqualification from the race.

If you are a family member, looking for more information on what can and can’t be done during the Cape Town Film Gate, please send an email to the race organisers (contacts below) or hello@goldengloberace.com.

The Golden Globe Race team in Cape Town and Les Sables d’Olonne wish to extend their gratitude and a very special thank you to the Royal Cape Yacht Club for their incredible hospitality and technical support, their RIB, and the yacht club’s installations to make this photo gate crossing a success.