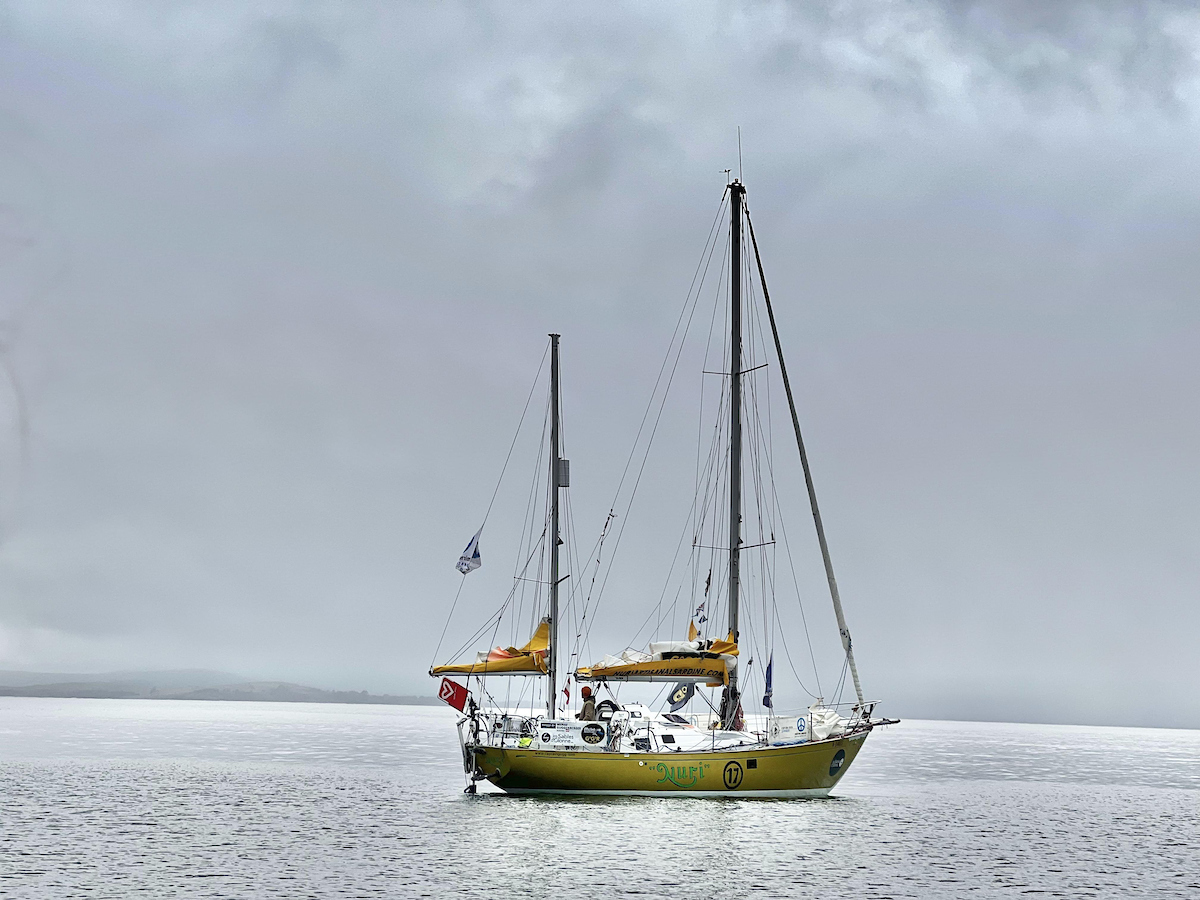 Simon Curwen (GBR) on HOWDENS leads the way, halfway across the Southern Pacific just four weeks from Cape Horn, bound for Les Sables d’Olonne having left 129 days ago. Only Ian Herbert Jones and Guy Waites are yet to pass the magic half way point. Other than Elliott, cautiously sailing to Fremantle for repairs, all yachts are sailing without equipment issues. The mind game of “no wind” has hit Kirsten Neuchäfer (ZAF) hard, watching Simon sail away and a few are seriously low on water which could be a game changer! All are holding their breath as the extreme heavy weather is still holding well below the rhumb line!

Michael Guggenberger (AUT) on NURI sailed through the Hobart Gate on January 3rd having sat becalmed for two days within sight of Tasmania. He was happy to arrive and decided to stay for two days to “tidy the boat, sleep, check systems and stitch a second set of reef points in his Mizzen sail”. He was met by his film crew shooting a documentary. Nuri Sardines is performing well and Capt. Gugg seems happy with his life on the ocean waves. When asked how he feels now to be heading home Via Cape Horn? He replied that he is “Already home! Onboard NURI!“

It’s been an eventful end to 2022 and start to 2023 for the leaders in the GGR fleet! As 2022 was ending, so was Simon Curwen’s undisputed leadership on the fleet. He was caught-up in a calm high pressure approaching Tasmania losing huge miles to Kirsten Neuchäfer (ZAF) and Abhilash Tomy (IND) hot on his tail!

Now the tide has turned on the wannabe leaders as Simon perfectly managed the high pressure through New Zealand. His pursuers became trapped in no wind zones around NZ for several days as Simon shot ahead at full speed making the gap 900 miles. Worse, is that both Kirsten and Abhilash are now in a different weather system altogether.

This painful experience after gaining so much in the preceding weeks, was obvious during their weekly calls to Race Control. Frustration and delusion were taking over. Listen to Kirsten’s weekly call HERE and Abhilash’s weekly call HERE. On the bright side, with the nimble Rustler 36 BAYANAT being faster in the light winds, (Abhilash confirming in Hobart he has a secret sail weapon), there is a race within the race between these two talented sailors that will push both in pursuit of the undisputed leader! Listen to Simon’s weekly call HERE. All three are reporting no major problems with their boats.

Kirsten has been awarded Cruising Club of America’s “Rod Stephens Trophy for Outstanding Seamanship” and her adherence to the tradition of assisting fellow mariners in distress, playing a pivotal role in the successful rescue of her fellow 2022 GGR competitor, Tapio Lehtinen.

Joining other famous CCA recipients such as Jean-Pierre Dick, Alessandro di Benetto or Mike Golding, Kirsten was her usual understated self when informed of the award for Tapio’s rescue:

I don’t really know what to say. I’m really honoured and it’s always something special coming from the CCA, but on the other hand I only did what everyone would have done. It’s the unspoken rule of the sea that you will help anyone in distress.

Nonetheless, the survivor himself warmly thanked Kirsten in a letter written aboard the M/V Darya Gayatri:

Thank you for your excellent seamanship in manoeuvring Minnehaha next to the raft, getting me onboard and for the rum. And then in cooperation with Captain Naveen Kumar Mehrotra, getting Minnehaha safely in the lee of M/V Darya Gayatri and getting me safely onboard the ship.

Ian Herbert Jones (GBR), was the last in Suhaili Class to sail through the Cape Town gate and was quite worried about not getting to Hobart in time. He is now expected around the 18th January with nearly two weeks to spare. He has been making 130 miles daily in the right conditions and still managing to make the 9-ton 35-footer move in the light. He reduced the gap with Jeremy Bagshaw (ZAF) by half since entering the Southern Indian Ocean exclusion zone and is now less than 360 miles behind. The South African sailor must yet cross a high pressure between his current position and Tasmania and may lose even more ground on arrival, expected late on the 13th January.

Jeremy’s OE32 Olleanna, is the smallest yacht of the GGR fleet but has a longer waterline than the Tradewind 35 (8,5 m vs 7,9m) and a nearly identical SA/D ratio (Sail Area divided by Displacement is commonly used as a way to calculate the sailboat’s “horsepower”) and should be faster downwind. The Olin Enderlin design fought head to head with Guy Waites’ Sagarmatha in the Atlantic and is clearly suffering a speed deficit as Jeremy has adopted a conservative approach sailing through the Southern Ocean, with the stated objective of finishing at all cost.

Jeremy Bagshaw (ZAF) faces another dilemma. He lost half of his freshwater in the Atlantic after a faulty tank manipulation. He was hoping to catch rain in the doldrums and in the southern oceans, but to no avail. Again after leaving Cape Town, despite having been through the most low-pressure system of the fleet, he caught no rain, as he explains in his call. He is left with just 45 litres, which isn’t enough to get to Cape Horn. He is unsure he can continue through the Pacific without taking on water. If he does, he would be relegated to Chichester Class along with Guy and no longer in the rankings.

Other sailors facing water issues include Abhilash Tomy who with 1 litre of fresh water per day considers himself okay, but he would like to catch rain if possible. Michael Guggenberger is relying on his stash of red wine and 30 litres of lemon soda to make sure he does not finish his water before the doldrums many months away! At least he has enough on board to prepare a delicious Tinto de Verano!

Guy Waites (GBR) in Chichester Class has been enjoying his best week since the start of the GGR, finally enjoying the sailing and clocking some miles as he shared in his weekly call. He was by far the fastest in the fleet, improving his daily and weekly personal best several times, finally settling at 185 nm/day. This was the 3rd fastest day in the fleet and joined the 1000-weekly mile club at 1079 miles on January 11th! He sailed into the no-go zone but did not have a penalty in Chichester Class and has now sailed back out of the 44°S zone. He is not expected into Hobart until mid February when he will be retired from the GGR, unable to make the cut off of January 31st, allowing a safe passage around Cape Horn before the end of March.

Elliott Smith (USA) Gale Force 34 has also been posting excellent speeds this week, consistently posting days over 100 miles, in spite of his reduced sail area due to jury rigging and a damaged bowsprit. He has to nurse the yacht to Western Australia very conservatively. His bowsprit suffered further damage in the last storm but is not being used. He sails only with a deep reefed mainsail and staysail even in light airs. The mast is secured by three halyards to the stem, running backstays and the staysail stay. All will be repaired in Fremantle 700 miles away, but it will be the end of his Golden Globe dream becoming a Chichester entrant on arrival, and then not making the Hobart gate in time.

Through it all Elliott remains in good spirits, especially after some chocolate bars were miraculously unearthed from the boat and being grateful for all the help and support he has received along the way, as he shared in his weekly call.

A decision has been made to drop the Punta del Este film gate. While the previous three gates are part of recreating the original 1968 Sunday Times Golden Globe Race entrants dropping films and letters, the Punta Del Este drop was mainly to grab Southern Ocean footage for media opportunities. The long split of entrants rounding Cape Horn now makes that task not relevant. This will also allow more tactical opportunities for the sailors to make gains, or suffer losses in their choice of course as they round Cape Horn and climb north to the equator.