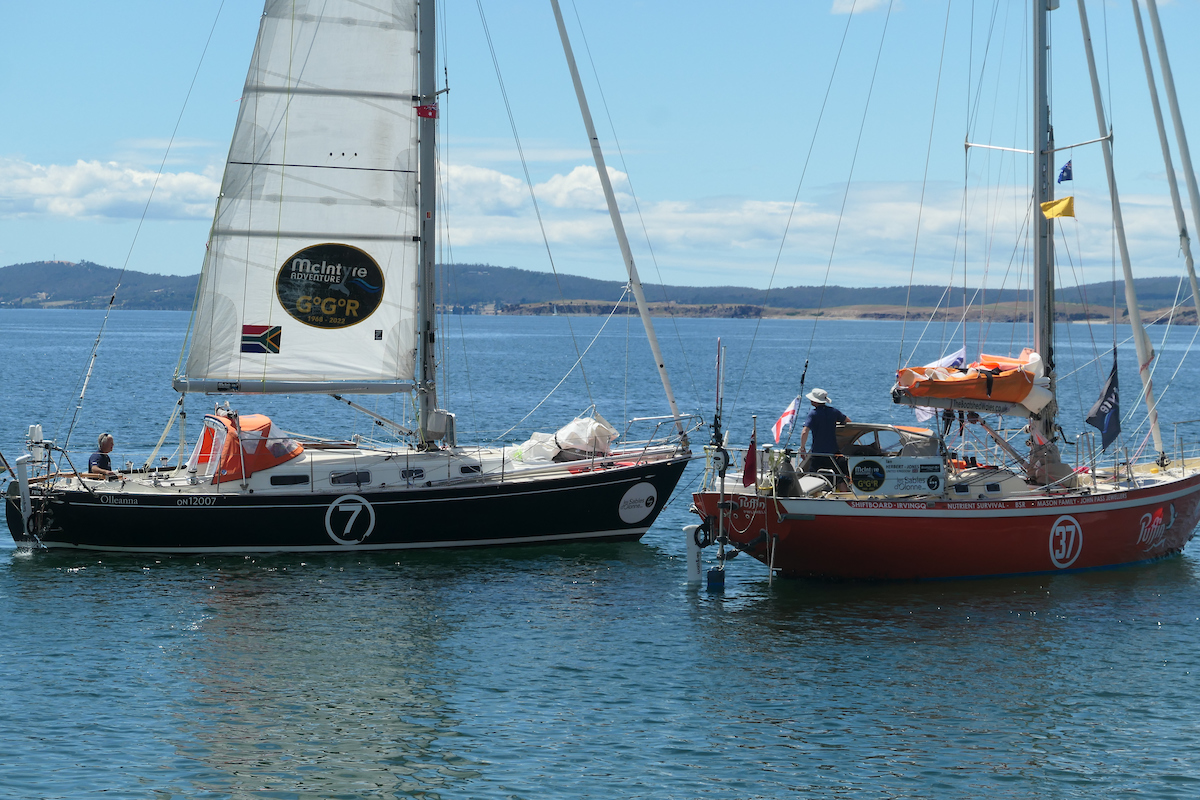 With Elliott out of the race and Jeremy beaten by barnacles, there are now just five contenders left for the GGR trophy in Les Sables d’Olonne and two sailors in Chichester Class with Guy Waites about to be dropped. Global warming or new found resistance? The barnacles are back big time in the Southern Ocean forcing Jeremy to stop and colonising Nuri’s hull! Could they also be the reason why Kirsten is slowing down?

Elliott Smith (USA) arrived to a warm Aussie welcome in the Fremantle Sailing Club marina after crossing Cape Leeuwin earlier this week. The 27 y/o American sailor has sailed 14.000 miles non-stop, solo, unassisted and crossed two of the great Capes out of three! His challenges have been more than most, sailing the last 5000 miles with significant damage to his bowsprit and the last few weeks with no forestay at all after repairs failed. He has shown true grit and determination with real seamanship and skill to make landfall. His tweets, and satellite call to GGR have kept followers engrossed in his voyage and mindset.

It’s been quite an adventure and while he is disappointed at not tying the knot into to Les Sables d’Olonne, has no complaints as he shared in his latest tweet: 24: #ElliottSmith (USA) – Gale Force 34 “Second Wind”: thank you everyone.. I am grateful for everything and I have no complaints, whatsoever.

He plans to repair the “Second Wind”, then offer her up for sale to another adventure. Bravo Elliott, what a ride it’s been!

The barnacles are back in the fleet, invading Jeremy Bagshaw (ZAF) for a second time. Forced to stop in Hobart to lift to scrap the bottom Olleanna at the Royal Yacht Club of Tasmania, all were shocked at the seven week farm of life. He now continues in Chichester class. A fitting tribute to Sir Francis Chichester who also stopped in Australia half around the world.

The smallest boat in the fleet always punched above her weight in terms of speed but was plagued by barnacles in the North Atlantic, forcing Jeremy to scrape the hull clean in False Bay. Olleanna’s average speed soon plummeted again mid-Indian Ocean, not matching Puffin’s. A sign that the dreaded Barnacles were back in force.

The South African sailor who was also facing severe water shortages and dwindling food supplies, finally forced to lift the boat for a proper hull cleaning.

There are a lot more barnacles than I originally thought, but stopping was the only option anyway. I don’t have enough food to go around the world at 3 knots, I would have had to call in somewhere, so I might as well do it here and enjoy the rest of the trip, rather than sweat it in the Pacific and somehow end up somewhere in South America, so this makes perfect sense.

Finding motivation for the race within the race in Chichester class

With another 13.000 nautical miles to Les Sables d’Olonne in Chichester Class and out of the GGR ranking, how will Jeremy, a well-rounded competitive racer, find the motivation to push through? The answer comes from  Guy Waites (GBR), thousands of miles away, alone in the Indian Ocean, still pushing and posting speed records, as he explained in his weekly safety call. He will not make the Hobart gate in time, so will be out of the GGR completely come January 31st, but sails on with passion.

Since I’m not in the race anymore, the mindset is critical to continuing. I need to get out and push the boat every single day. Making big distances like today (nb:174 miles), getting closer to Hobart, and catching up on the others in front of me is a big part of that motivation.

Attrition is the name of the game for Ian Herbert-Jones (GBR), the unlikely hero of the Southern Indian Ocean. 10th boat in Cape Town, he now is in 5th place from 16 starters in Hobart after a quick crossing and many retirements! He gained up to a thousand miles on Jeremy before being stranded on a road to nowhere at the South East Cape of Tasmania on Tuesday.

Approaching Tasmania he once again contemplated the option of not continuing and reflecting on why he was there and what he had achieved. It is still a long way to go and he has invested so much emotion, effort and spirit to get this but conceded the isolation and mind game of it all is the hardest. It is clear his superb preparation of PUFFIN drives him on just as much as his family and friends. He is now on his way home.

Ian had a great run in the Indian Ocean and is looking forward to the challenge of Cape Horn, the tropics and back to Les Sables d’Olonne!

Frustration was more of an issue for the leader Simon Curwen (GBR) on Clara sponsored by HOWDENS. He lacked weather information heading into Tasmania, subsequently parked in a high pressure and lost his patiently built 700 mile lead. He was better after his narrow escape from the Tasman Sea but equally frustrated with not experiencing the big Southern Ocean swells he was looking for, as he explained on Monday’s safety call. In the past days he has been getting plenty, with 7-8 mtr rolling seas, strong roaring 40’s and regular passing fronts driving him toward Cape Horn as shared in this week’s tweet!

04: #SimonCurwen (UK) – Biscay 36 “Clara”: Gale all day today. Must have heard my comments to Seb on the call yesterday. Got the seas I’d been missing…

The biggest disappointment is for Kirsten Neuschäfer (ZAF), who briefly led the Golden Globe Race in Hobart with her 35-hour compensation for the rescue of Tapio Lehtinen. She is now trailing more than a thousand miles behind Simon with little hope of taking the lead again for now.

Worse, she is not matching the pace of Abhilash Tomy (IND) on Bayanat now around 200 miles ahead of her. He seems constantly faster in certain wind wave combinations and talks of a secret sail combination to give an edge. One thing is certain, he is back racing and knows Simon has a long way to go. It is never over till the fat lady sings.

To make frustration worse, Kirsten is the only one of the three sailors to get clear charts on her weatherfax. She knows there is wind 4 degrees (240 miles) south of her position, and she knows what wind Simon gets, accurately estimating his 1000+ mile gap on her.

The Pacific hasn’t been exciting at all so far. It’s been frustrating really, the worst is knowing there’s wind not far South from you, and not being allowed to go there.

The GGR Exclusion Zones are part of an International Maritime Rescue Coordination Centers agreement to keep sailors closer to any rescue assets/ships if needed. They are important for risk mitigation and not exposing rescuers to unnecessary risk. The GGR Exclusion zone leading to Cape Horn, is 1 degree further south than even the Vendee Globe allow. To complicate matters this season, the pressure systems are generally much further south than usual, but that is the challenge of sailing the Southern Ocean and the GGR!

Minnehaha has been suspiciously off-pace for the last few weeks with a possibility of barnacle growth. Kirsten had a few in Hobart and had planned to dive on her way to the Pacific. Alas, even in the calms, the residual swell and sighting of sharks did not provide optimal conditions for diving, but the possibility is real considering Michael Guggenberger (AUT) discovered new ones on NURI’s hull off the coast of New Zealand.

Wanting to shoot dolphins underwater with the GoPro, Capt. Gugg ended up identifying new small barnacles on Nuri’s hull on top of the big ones he already had in Australia, and took advantage of the light weather to dive and scrape them off.

NURI Sardines is still struggling in light winds and is concerned about lack of water, unable to collect any in the rare squalls or storms, as he shared in his last safety call. He received a heavy weather warning from the race office for Friday and Saturday for a SW 35 kts front gusting 45, giving him a chance to use the new reef he made for his mizzen sail!

It’s a bit of a nightmare, I’ve been bumping around in no wind, big swells, there’s clouds everywhere and I haven’t been able to take any water. I’m dreaming of 30-40 knots of wind from the back and 8 metre swell!