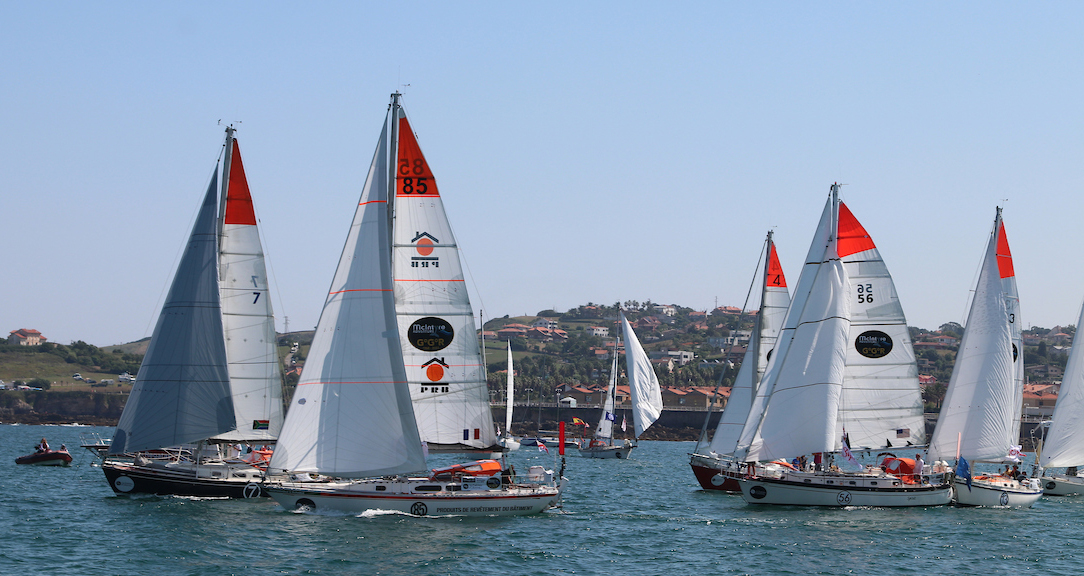 It was a beautiful day in Gijón, and an emotional send-off from local sailors and boats who came in great numbers to wave goodbye to the 15 GGR yachts after a week of briefings and festivities. Yannick Moreau, mayor of Les Sables d’Olonne, Ana Gonzalez, mayor of Gijón, Enrique Fernandez Consejero de Industria, Empleo y Promoción Económica also went out on the water, accompanying the sailors out of Asturian waters into the Bay of Biscay.

The fifteen boats of the GGR are for the first time sailing as a fleet and measuring up to each other for this 240-mile friendly race towards les Sables d’Olonne in a nice westerly breeze, under the sun. The SITraN Challenge has no racing rules and allows boats to be sailed solo or fully crewed, with friends and family, spending quality time together before the build-up of the village leading up to the start in three weeks.

It also allows the organizers to check and validate critical safety and communication systems on this offshore voyage, including the Yellow Brick tracking and 2-way satellite communications systems, before they set off around the world. All this before final safety briefings and safety checks in Les Sables d’Olonne when entrants receive the much anticipated “Green Card” that finally lets them start!

The start was spotlessly organised by the Real Club Astur de Regatas and very hotly contested, crossed first by South African sailors Jeremy Bagshaw and Frans Loos on the OE32 Olleanna, followed by Damien Guillou sailing solo on his Rustler 36 PRB in race configuration with 230 days of food and water onboard, and the father-daughter crew of Simon and Nikki Curwen, both competitive solo sailors on the Biscay 36 Clara.

Damien soon took a solid command of the fleet, out the Ensenada de San Lorenzo, with impressive ease and speed, while the leading group was later joined by Abhilash Tomy, Kirsten Neuschäfer, Ian Herbert-Jones and Arnaud Gaist. The winds are fair towards France for a 2-day sprint to Les Sables d’Olonne.

Today is the culmination of an intense week here in Gijón, with critical safety briefings, systems set-up and tested leading up to the race state.

Most importantly it has been a special time and place where the solo sailors and teams who arrived a week ago, are now leaving as friends, through helping each other and enjoying each other’s company during the Semana Grande. This is the best outcome possible, for them and for us.

Don McIntyre, president and founder of the GGR

The week was filled with activities and visits to the neighbouring towns of Candàs and Villaviciosa, while the open boat morning of the Saturday was a huge success among the Asturian sailing community, especially children and young sailors who had the occasion to visit the boats and meet the skippers.

Gijon and the Asturians have been an integral part of this success, and we thank them for their incredible hospitality, enthusiasm and “ternura asturiana”.

Meanwhile, Les Sables d’Olonne are gearing up for the race village that will welcome the public in the Esplanade du Vendée Globe three weeks from now, hosting heaps of activities, boats on display, coastal race on local traditional sailboats and the grand opening with GGR 2018 winner Jean-Luc VDH live in concert!

I am delighted that the beautiful city of Gijón writes its name in the history of the GGR, a legendary race. Many thanks to our Spanish cousin city and its Mayoress, Mrs Ana Gonzales, for launching the prologue of this adventure which promises to be thrilling.

On the other side of the Bay of Biscay, the town of Les Sables d’Olonne is ready to welcome the skippers and the public: fireworks, large race  village, entertainment… 2 weeks of festivities starting on August 20th. The pressure is mounting for those who are about to set off on the longest sporting event in the world.