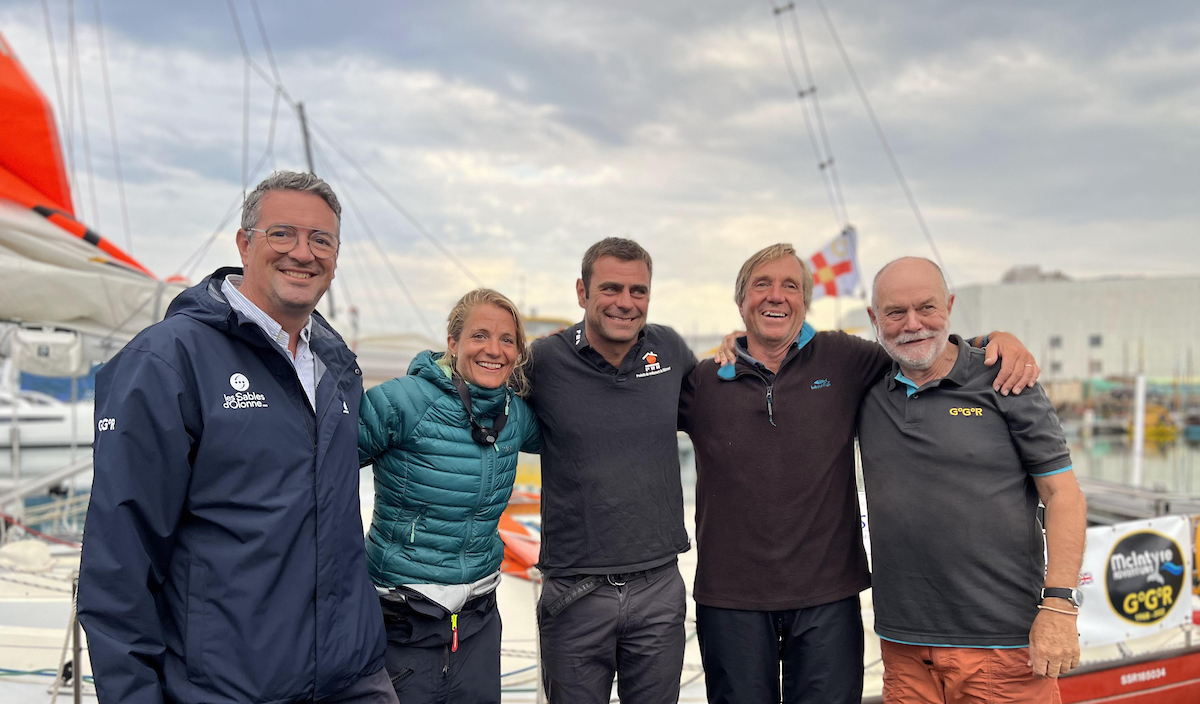 With the finish of the SITraN Challenge from Gijon to Le Sables D’Olonne, the GGR Fleet is assembled for the first time on the Golden Globe Race dock, gearing up for the village opening in three days

Damien Guillou (FR) on his Rustler 36 PRB was the first to cross the finish line in the dark at 0630 local time, having sailed solo from Gijon, mostly under spinnaker. The race was “pretty full-on” Damien said on arrival, as he had to contain the attacks of Simon and Nikki Curwen (UK) who also flew spinnakers on the Biscay 36 Clara, for a long beam reach from the Asturian coastline, arriving just 53 minutes behind PRB. One hour later, South African sailor Kirsten Neuschäfer on her Cape George 36 Minnehaha arrived 3rd on the finish line, having reached under working jib and staysail only in what she considered fast cruising! All three have staked a claim on the ultimate prize of winning the GGR!

There were a lot of conversations on arrival, as sailors tested boat speed and sail combinations with reefs, foresails, and spinnakers on a long, tight reach with winds gusting in the high 20’s on day two and asking themselves if sailing “all-in” like in a Figaro or a Mini 6.50 was worth the gain after the boats reached hull speed. Most agreed the reward of sailing fully canvassed was probably not worth the risk on a long-distance race like the GGR, and that the most competitive of them had to work to pace themselves!

The results of the SITraN Challenge and the comparable speeds these boats have is really interesting. It is clear that the Rustler 36’s are in for a tough competition with a variety of boats like the Biscay 36, Cape George 36, Gaïa 36 and Saga 36.

Also that different types of skippers from full-on racers to more conservative long-distance navigators can achieve similar results, levelling the playing field for all participants. Watch this space!

GGR Veteran Abhilash Tomy on his Rustler 36 Bayanat was doing well and in the lead with Damien Guillou, before a collision with a bulk carrier in the morning of the second day. Abhilash was below deck with his manager on watch at the time. There were no injuries and the ship stood by for two hours while the crew checked the yacht then resumed sailing. The yacht’s bow needs serious composite work before the race starts on Sept. 4th just three weeks away. Abhilash has taken the mast off for a complete rig check, and has a team coming from Belgium led by Dutch designer and builder Dick Koopmans bringing a full Rustler bow with them. Bayanat will be back in the water and functional on August 29.

Other skippers are in Les Sables d’Olonne meeting with the fleet for the first time, with Graham Dalton back from his 2,000 nm GGR qualification. He has submitted a new application to re-join having previously resigned, which was accepted by the organisers, and the fleet now has 17 official entrants. Aleix Selles from Spain has successfully completed his 4000 nm solo sailing experience. He is trying to re-join the GGR but is now facing delays with the delivery of his new GGR mast and rigging in La Rochelle.

Elliott Smith has completed his World Sailing Survival course in the UK and is currently in Palma de Mallorca, Spain completing his STCW Medical Proficiency course. He will be returning to Les Sables next Friday, meeting the other skippers for the first time. He has missed compulsory GGR briefings so will face some penalties but is now sure to start in the GGR!

All skippers and their teams are now gathered in the same place, down the 7000 sqm Race Village managed by Les Sables d’Olonne nearing completion for the grand opening on Saturday at 10:30. The skippers’ presentation takes place on the centre stage at 16:00 and two weeks of exciting exhibitions, animations and activities are about to start!