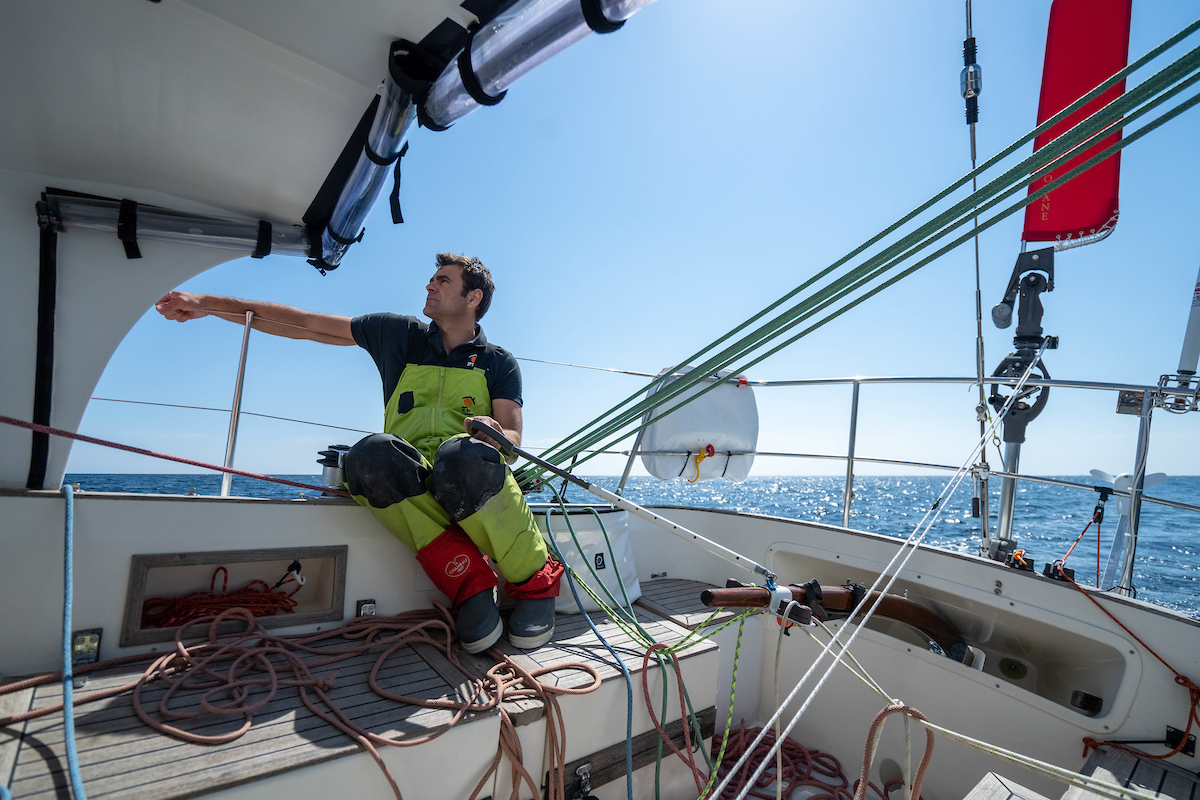 The new September start date for the Golden Globe has not made it easy departing Les Sables d’Olonne. It is a transitional season in the Bay of Biscay and the route towards Lanzarote is uncertain as the fleet has been hit with several low pressure systems moving towards Europe.

This means strong headwinds and heavy seas for the entrants.The fleet split in two groups early with a west option to catch today’s rotation and a direct route to the Cape Finisterre and a South option along the coast of Asturias and Galicia in sheltered waters and calmer winds. Local Frenchman Arnaud Gaist, was unexpectedly and unusually  headed way north raising some concerns, but finally tacked on Thursday afternoon and sent a message: “All is well on Hermes Phoning”.

The results will unfold Friday as Tapio Lehtinen, the only sailors who persisted in the west option pushing through the tough conditions, will converge with Pat Lawless, Simon Curwen and Abhilash Tomy who are leading the easier south option towards Cape Finisterre before  starting their descent along the coast of Portugal. Watch this space as another week of headwinds is predicted. Entrants express real frustrations to GGR Control on all communications.

Race favourite Damien Guillou (FR) is returning to Les Sables d’Olonne to fix his windvane mount which came loose in the heavy weather. After spending Tuesday night in heavy seas trying to effect repairs, he had no option than to return. The GGR Notice Of Race allows any entrant to restart up to one week from the official start. He has until Sunday the 11th at 14:00 UTC to start again.

This will no doubt stir memories for the people of Les Sables d’Olonne who saw Michel Desjoyeaux come back in 2008 after 200 nautical miles for repair, and ultimately win his second Vendée Globe. Time will tell, and the boats of both events have little in common but the headwind facing the fleet next week may well provide a good opportunity for a come-back!

The strong headwinds and seas are taking a toll. Leaks, electric shorts, radio problems, weatherfax issues have been mentioned several times. Guy deBoer (USA) was seasick and gashed his leg but is now trucking along. Ertan Beskardes (UK) was hit by a wave ondeck, fell  into his cockpit and was knocked unconscious, hurting his arm. Contact was made with GGR MSOS 24hr telemedicine doctors. Today he sent an encouraging message “all good on board, just slow progress, weather good, food super”. Edward Walentynowicz (Canada) who is otherwise having a good race mid-fleet informed GGR control today he was pondering retirement and will call his wife and Team Manager Magda to discuss his options prior to making a final decision. If he remains in the GGR he will receive an 18 hour time penalty for the banned phone call. .

As the lead boats are heading out of the Bay of Biscay, the fleet is receiving regular forecasts on HF, radio and weather fax to work on their strategy, including choices negotiating the Cape Finisterre Traffic separation Scheme. They are heading into more headwinds along the coast of Portugal over the weekend as a low-pressure system is forming over the Azores. This past week was tough, and the next days certainly interesting as sailors exit Biscay into the Atlantic towards Lanzarote. All are frustrated and longing for the following winds!