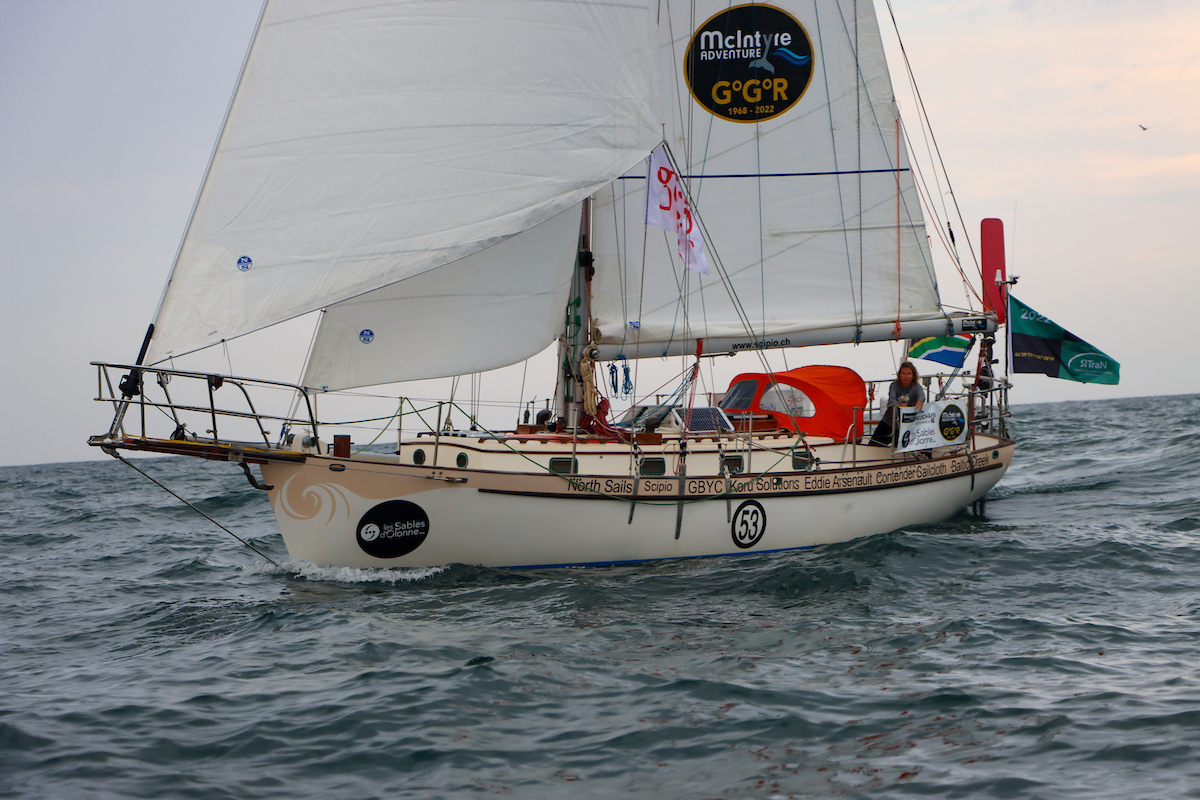 Top Picture: Kirsten Neuschäfer (SA) has been averaging 7.5 knots at times trying to catch the leaders and remain intouch. Her Cape George 36 is proving a great match for her 240,000 miles sailing experience and looks like a fast ride!! Watch this space. Picture Credit: GGR2022 / Nora Havel

There has been plenty of drama as boats and sailors had their first shake-down in the Bay of Biscay a steadfast Pat Lawless (IRL) leading the way, Ertan Beskardes (UK) had an electrical short and later knocked himself out falling into the cockpit, Guy deBoer (USA) got seasick for the first time and lost all radio contact, race-favourite Damien Guillou (FR) was headed back to Les Sables d’Olonne with a broken windvane, unsure he could make the start line in time and Edward Walentynowicz (CAN) decided to retire for the race, pondering another participation in 2026.

But what change a week makes!

Simon Curwen (UK) and Tapio Lehtinen (FIN) are now in a solid lead of the fleet, sailing close by and emulating each other into high daily mileage, Pat Lawless (Ireland) ,who made a fantastic start, got lost on his East option, letting the leaders escape, and allowing the western group of Abhilash Tomy (IND), Guy deBoer (USA) and Kirsten Neuschäfer (RSA) to close in as the routes are converging 100 miles from the Lanzarote gate.

Guy deBoer, who has been breaking blocks on a steady basis since the start, has narrowly avoided a collision with a fishing boat by 5 metres, as he tells in last Wednesday’s dramatic satellite phone call available on the GGR SOUNDCLOUD. Early last week investigating a strange noise while climbing out of the companionway, he was shocked to find a large green fishing boat dead ahead and rushed on the helm, cutting his leg in the process but avoiding collision by just 15ft. The captain was screaming from the bridge, unable to alter course. Guy then sailed straight across the towed fishing net fortunately not hooking up! During the confused seas of the first week he was thrown across the cabin and damaged his AIS detector alarm, so it did not respond. For some reason the fishing boat did not see his AIS transponder, nor call him on the VHF.

Before Edward Walentynowicz retirement, he was giving weatherfax reports to the fleet. Guy, whose leg is healing well, has now become the official weatherman for the fleet, sharing his Weatherwax info on the regular HF Radio buddy chats.

Elliott Smith (USA) reports an issue with his through deck mast collar packing, damaged in the first week allowing movement of his mast. He knows he must somehow repair it well before the grinding South Atlantic trades forward of the beam. He was happy about his companionway dodger built in the past few days and suggests it will help keep the spray out but has a constant leak from his hull deck rub rail he is trying to solve.

Unfazed by her average start and coming unscathed out of Biscay, Kirsten Neuschäfer has been posting impressive high average speeds, catching up, and now casting away from the chase group. It is clear that Minnehaha her Cape George 36 is quick, but Kirsten knows how to get her going: gennaker up and helms herself as much as she can to make up for lost ground. She is posting a spectacular come back in the forefront, as is Guy deBoer who is power reaching under an asymmetric spinnaker happy with the speed potential.

Kirsten’s Cape George 36 and Guy deBoer’s Tashiba 36 are similar: maximum hull length, long waterline, heavy displacement and generous cutter rigged sail plan make for slightly higher speeds than their counterparts, although Abhilash Tomy’s Rustler 36 – a lighter, less powerful yacht perceived by many as having the best all-round performance is still holding them off, but until when? The Rustler 36 may not be the fastest boat in the fleet as many have believed since Jean-Luc Van Den Heede’s win in the 2018 GGR. Pat’s Saga 36 who showed great potential in the strong winds of the first week, seems less at ease in the current lighter winds. In front, Tapio’s Gaia 36 with fine entry, high ballast ratio, deep draft and low freeboard is shining through and through in all weathers and points of sail, whereas Simon Curwen’s Biscay 36 still manages to hold him off.

Damien Guillou (FR), also on a Rustler 36, is working hard on his comeback. Back in Les Sables d’Olonne with a broken windvane bracket, he had Vincent Riou and Jacques Fort reinforcing the support bracket, switching the 10mm bolt for 12mm, adding an extra bracket for strength, before leaving 6 days after the fleet. Since then, he has sailed through unstable winds out of Biscay and has been consistently posting daily averages in the top of the fleet. His seven seasons racing Solitaire du Figaro are certainly coming handy!

Most importantly, all boats are now out of Biscay. None of them has had meaningful interactions with orcas, despite an early fright for Elliott Smith (USA), two Orcas visited his boat but did not bite. Most sailors stopped hurting themselves except for Guy Waites (UK) who had a “disagreement” with Sagarmatha’s boom and his head!

All skippers are finally enjoying some time off the wind with a decent sea state, rising temperatures and barometers posting good speeds on a straight line to Lanzarote. The leaders are expected into the Rubicon Marina film drop at 2000hrs UTC today FRIDAY 26th with the first 10 sailors expected through in the first 30 hours.

Each sailor must approach the Lanzarote film drop buoy 300 metres south of Rubicon Marina with a reefed mainsail. When abeam they drop all headsails and sail slowly for 20 minutes passing over films and letters before hoisting full sail to continue the race. Don, Jane and Aïda will stream live videos interviews in French and English on Facebook, Rob will shoot and cut videos for NEWS RELEASE and Nora will update pictures of the sailors as they drop their video footage of their first two weeks at sea and share their first taste of the GGR adventure. For many of them it will be the first chance to find out their position in the fleet!

Departing the film drop, sailors will face a wind hole forming Saturday between the Azores and Lisbon. It is set to gradually come down over the Canaries on Sunday and stay there until late Monday. This may create a first weather gate between the leaders and the ones in pursuit, followed by the doldrums on their way to the next mark: Trindade island in Brazil.

The skippers, in addition to their daily tweets, and weekly recorded safety calls to race control will be able to share their stories in real time with the beginning of the weekly 20-minutes exclusive sat phone interviews to accredited media starting on week 4 of the race. If you are an accredited media, click here  to request your personal interview, they are exclusive to you!