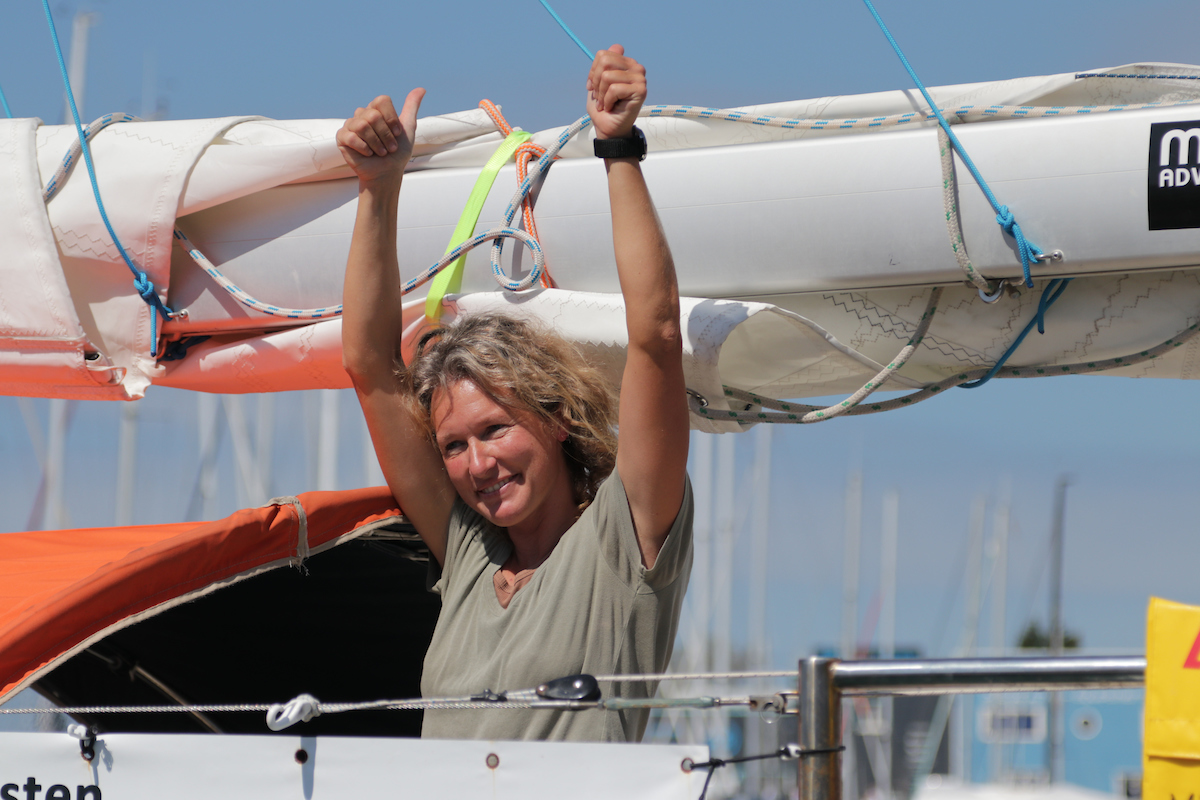 GGR fleet on the way to Cape Town,  last call before the Southern Ocean, battling high pressure systems and barnacles (again), and a local hero making a big bet!

Cape Town is a traditional fixture in round the world sailing, and the last port of call for sailors to assess their condition and the one of their boat before venturing in the Indian Ocean. With the strong winds, swell and lack of shelter in the South, once you turn left, there is no turning back.

Some sailors have sorted their issues and maintenance at sea. Simon Curwen (UK) moused his foresail halyard, although he is now facing energy issues. Damien Guillou (FRA) dismantled and put his Hydrovane back together, including the transmission. Ertan Beskardes (UK) finally sorted his electrical problems and is back on full power.

With the barnacle issue and no opportunity to check the hull before Storm Bay in Tasmania where scraping is illegal, several sailors are enquiring whether an anchoring in South Africa would be possible. Some like Elliott Smith (USA) will try to sort their leaking deck, Arnaud Gaist and Damien Guillou (FRA) will change their foresail combination, others will want to check systems of just to feel the warmth of human contact, prior to heading in the extreme solitude of the Indian Ocean.

The Cape Town photo gate has become a welcoming opportunity for the fleet, Don McIntyre Founder and Chairman of the GGR explains:

We decided on a Cape Town film drop to follow the footsteps of Bernard Moitessier whom the 2022 GGR celebrates. It also gives us an opportunity to share with the public the adventures of the sailors crossing the doldrums, the equator and going into the Southern Atlantic, but several entrants are looking for a quick stop before heading south.

As stated in the notice of race, sailors can’t go into the harbour, but the outer breakwater provides shelter from the Cape Doctor, this dry south-easterly wind blowing at this time of the year. There is no mooring buoy available but they can moor in 14 metres depth to prepare for their exit towards the long, lonely leg in the Indian Ocean, towards the Hobart photogate.

Most will check their hull state and whether they are barnacle-free, and all will make the most of the coast and human proximity to get as much fleet and weather information as they can after weeks without weather charts. Meanwhile, some will have a much awaited catch-up with their families and friends in person or through Facetime.

More decisions for the GGR fleet

The leaders Simon Curwen (UK), and Tapio Lehtinen (FIN) are making their way upwind through the northern route in heavy seas as shared today, while Kirsten Neuschäfer (RSA), and Pat Lawless (IRL) have chosen the Southern option on a longer route but faster, more comfortable point of sail. It’s been working well for Kirsten, in second position this morning. Damien Guillou (FRA) and Abhilash Tomy (IND) who stayed in a middle route are now in the calm bubble, but should get some pressure coming from the south, where Michael Guggenberger (AUT) is making good progress, catching up on them!

Those choices are made even harder by the lack of weather information. After trying unsuccessfully to reach the Rio emissions for weather charts and negotiate the South Atlantic High, the fleet had great hopes in Cape Town but got the same amount of weather charts: none.

The second half of the fleet sails in different conditions. Ertan Beskardes (UK) and Jeremy Bagshaw (RSA) are slowly getting out of a barometric swamp that made their progress slow  and unpredictable until now. Elliott Smith (USA), Ian Herbert-Jones (UK) and Arnaud Gaist (FRA) are further west, but faster and on a direct course to Cape Town, although a wind change from north to south will bring confused seas, courtesy of  a low pressure crossing from west to east. All are happy at sea, enjoying the conditions as Ian shared in his tweet, and unfazed by their distance to the lead.

Before this last stretch to Cape Town, it’s been champagne sailing in the southern hemisphere for the sailors, with conditions that brought unseen performance to the GGR 2022.

The GGR followers know Damien’s magic number of 550: the distance between him and Simon Curwen at the Cape Finisterre. About 500 miles separate weather systems in the Southern Oceans and a lower number could help Damien to work his way up the fleet in the same weather system as the leader, currently 550 miles ahead.

Distance over 24 hours assesses average speeds over a day: 168 miles in 24 hours is a 7-knot average, an excellent performance for any production cruising yacht, even more for the long keeled GGR yachts, loaded with food and water!

Kirsten Neuschäfer is by far the fastest sailor of the GGR fleet. She holds the 24-hour record at 183 nm on October 26, a 7.6 knots average, and has 14 of the best 20 days to her name, leaving only Abhilash (177 nm) and Tapio (174 nm) to pick the remaining crumbs. Other sailors above 168 miles per day are Damien Guillou, Simon Curwen, Pat Lawless and Michael Guggenberger whose onboard footage has just been released.

The  7-day distance, gives a better view of the boats allround performance, over longer periods of time with changing weather conditions and different points of sail and sea state. Most entrants beat their personal best  in the last two weeks, with the fleet record going to Abhilash Tomy on October 28 with 1140 miles a week for a 6,8 knots average!

Useful statistics, but where can you find them?

Meet Jonathan Endersby, GGR enthusiast and self-described “product engineer, radio nerd and sailor, who builds cool things and puts them on the internet” has put together the really cool indeed GGR Underground website to track the progress and performances of the GGR fleet based on the tracker update.

My father was a sailor, and I grew up on dinghies listening to stories of his adventures in far off lands. I read Moitessier’s “The Long Way” just after school and then two transatlantics on Skip Novak’s Pelagic Australis convinced me that I was happiest at sea. I met Jeremy Bagshaw through a good friend and ended up moored a few boats away while he prepped for the GGR. My obsession with the race is a combination of my two passions, software and sailing. Long races especially can benefit from more nuanced insights. For instance, highlighting that there is still only a 5% difference in the overall distance between Simon and Arnaud can really put things in perspective when you’re sailing around the world!

Jonathan is based out of Cape Town where he and Don are catching-up, waiting to greet the entrants at the second photogate. Another amazing tool to follow the race, but not so underground anymore!

Barnacles are back and kicking!

Those top speeds are in sharp contrast with the looming disaster for some of the entrants: the dreaded gooseneck barnacles.

They were first spotted by Jeremy Bagshaw (RSA) and Damien Guillou (FRA) after cutting through the Cape Verde Islands, and later by Tapio Lehtinen (FIN) haunted by his 2018 experience, who overcame his fear of sharks and went overboard to clean his hull, removing around 60 of them.

Guy Waites (UK), one of the best prepared sailors, was unable to remove them at sea with a scraper and announced to Race Control he was diverting towards Latin America to clean his hull. It was a shock among the skippers and a wake-up call for all.

Since then, Pat Lawless (IRL) and Ertan Beskardes (UK) have discovered some and all sailors are diving at the first opportunity for hull cleaning before reaching the colder waters of the Southern Oceans.

For Don McIntyre, the race founder and chairman, “The GGR is all about planning, preparation and execution, and barnacles, which were already an issue in 2018 are part of this. The 2018 winner Jean-Luc VDH had no barnacle problem, why? His preparation was exemplary with serious anti-fouling consideration in every respect: three layers of hard paint + 2 layers of abrasive to sail through the Atlantic where barnacle activity is high, and a dedicated protection bag around the hull before the start to keep sunlight and sediments away. He understood the issue and it showed.”

Interestingly, virtually none of the entrants followed his proven process, avoiding instead to repeat Tapio Lethinen’s mistake, but it is now proving insufficient for the fleet and a hefty price to pay for some.

Another factor is the ban of toxic substances in antifouling due to higher sustainability requirements, which certainly makes them less efficient than in 1968 and fairly less than four years ago. Increasing water temperatures in the Atlantic, and increasing barnacle activity are adding to the challenge. Barnacles certainly are a critical one for the GGR.

Who will be first in Cape Town and when can we expect them?

It’s been hard for the leaders to place the high-pressure system without any weather chart, and a testament to their seamanship. At least most of them avoided being trapped inside so far, with Simon and Tapio on the north side, tacking their way through the South Easterlies in upwind conditions.

Rounding the high through the southern route as Pat and Kirsten are doing now is a bold move, it adds many miles to the route with no guarantee that the wind will hold, the high will travel north, and that there will be a way to cross towards the South African coastline.

Kirsten Neuschäfer showed us over and over that she is no stranger to bold options, and will always try something new rather than stick with the fleet. It has paid-off and sometimes cost her dearly, but this time she seems to be making the South Atlantic hold-up!

While Pat Lawless picked a middle way too close to the centre of the high, Kirsten pushed another two degrees south to be in stronger winds, and has been posting the fleet’s best daily averages for several days now.  Kirsten went from 5th position last week to Second today, and since she will come to Cape Town from a southern route may gain precious miles on Simon in upwind conditions on her approach to Cape Town.