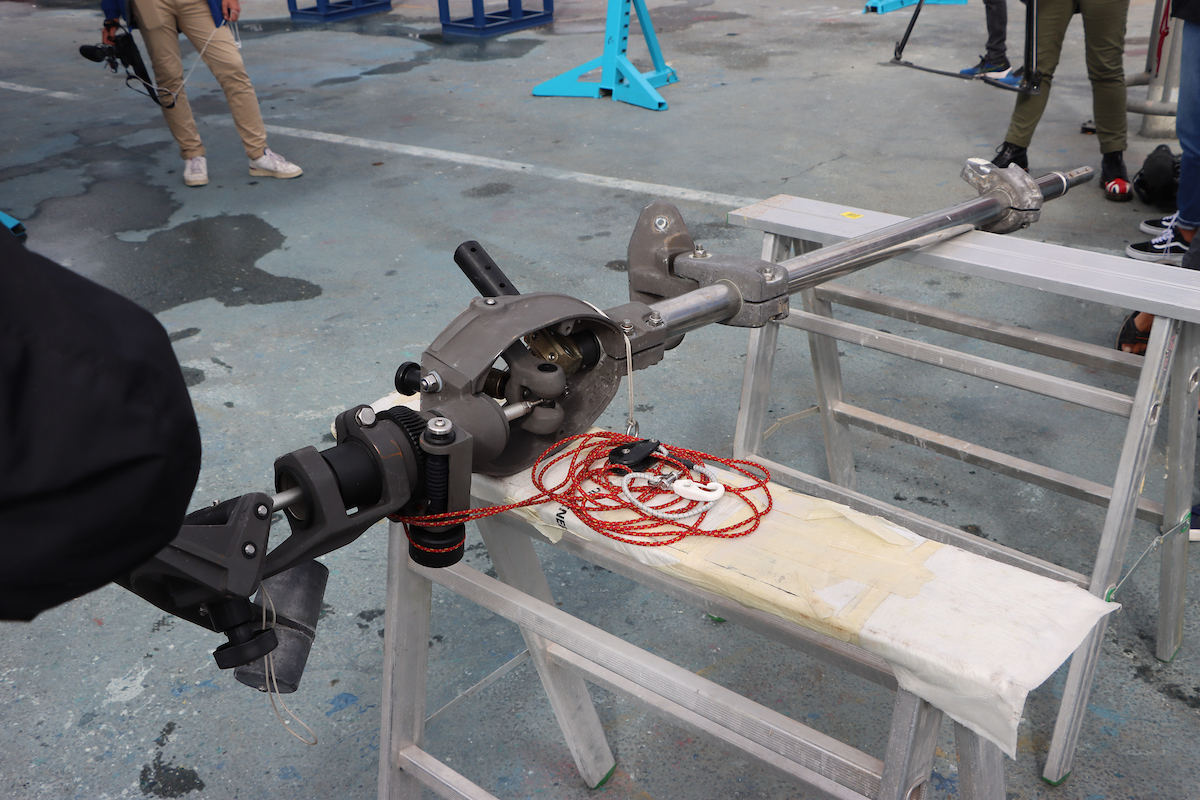 Deep in the Southern Ocean battling 12m seas and 70kt winds in a GGR yacht, you need to know your self-steering gear will keep working. If it fails you are seriously struggling to keep the odds in your favour that you will still be smiling when it blows over!

In the late 70s I set sail from Adelaide, South Australia for a three-year Pacific cruise in my Duncanson 29 SKYE. I fitted a Plastimo NAVIK windvane which was expensive to import, but I knew from watching the first Mini Transat’s (with Jean-Luc Van Den Heede!) that a good self-steering system was very important.

700 miles later, sailing through Bass Strait, a 5mm bolt holding the Navik wooden quadrant slipped out, rendering it inoperable in the middle of the night. With 35kts and 4-meter seas I could not fix it. I hand steered for 16 hours, unable to leave the helm to change hanked sails for fear of rounding up. I was over canvased and, on the edge, until we made anchorage. It taught me a few important lessons I never forgot. I now spanner check “things” before and during a major passage.

A few years later I was working with Englishman David Scott Cowper on his two solo circumnavigations to beat Sir Francis Chichester’s E/W and Sir Chay Blyth’s W/E solo records and met Nick Franklin the builder of the Aries Wind Vanes. I became the Aries Windvane distributor for Austral Asia and found myself in Sydney to service all Aries windvanes in the 1982 BOC Challenge, the second ever solo around the world race 14 years after the original 1968 Golden Globe. I met Sir Robin Knox Johnston, saw all the windvane issues and so the story goes….etc etc…

In the past 45 years I have sailed with QME, Navik, Hasler, Fleming, Aries original, Aries Lift Up, Monitor, Windpilot, Hydrovane, Sailomat and South Atlantic windvanes. I am aware of virtually every commercial windvane sold in the world. None are perfect, but some are far superior to others. Some are more suited to certain situations and types of boats for various reasons of size, power, design and the voyage itself.

The critical nature of windvanes in the 2018 Golden Globe sailing solo in the Southern Ocean was clear for all to see. Monitor windvane “break tubes” were breaking far too easily. Three Beaufort windvanes suffered the same catastrophic structural failures. The knock-on effect of a windvanes breaking and forcing a skipper to hand steer, or “heave too” in bad weather while effecting repairs can lead to disastrous consequences. That was clearly the case in GGR 2018.

As a result of these experiences, as organiser, I decided windvanes must now be assessed and reviewed as Significant Safety Equipment. To mitigate this risk, the GGR now allows “sealed” (their use activates a penalty) electric Auto-pilots as a safety back up and all windvanes must be “Approved” before allowing a particular brand into the GGR. To achieve that approval, a manufacture or entrant must submit a comprehensive proposal to show why they believe, on GGR style boats, in the Southern Ocean for 30,000 miles, the unit will keep operating. Various brands are now approved, one, only after proposing to make GGR specific modifications. GGR now investigate all GGR windvane incidents as a matter of safety protocol. After speaking to Hyrdovane and the sailors affected, here are our findings.

Three GGR entrants have problems with Hydrovane units in this edition to date. Two minor and one serious. Two were caused through lack of onboard observation / maintenance with bolts coming loose. It happens to all machinery that moves constantly, (just like my Navik!) This is an operator issue.

Hydrovane has a strong reputation with most GGR entrants. 12 of the 16 GGR entrants chose Hydrovane. Two fitted Aries and two Windpilot. Hydrovane representatives offered free inspections and service to all Hydrovane units at the GGR village prior to the start. Damien Guillou did not take up this offer.

On 6th September, three days after the start, one mounting bolt on Damien’s Hydrovane broke the head off. It broke in tension when the main load was actually in sheer. This suggested it may have been either, over tightening or the head not seated flat on the contact surface. He fitted another support arm, replaced the bolt and Nyloc nuts were visually marked to show any movement. He set sail six days behind the fleet and is is currently heading to Cape Town now in 6th place, a few hundred miles behind the leader.

On 20th October, Damien’s main stainless steel rudder shaft broke. This shaft is made of 1.25” (32mm) Super Duplex Ferrinox 255 stainless steel, 3 x stronger than 316 stainless steel. This material has been used by Hydrovane since 2009 in all units and no breakage has yet been reported, although, under heavy load – ex. a whale, a dock or caught in a drogue line, some shafts have been bent, but none broken.

For easy removal, the Moulded Rudder is fitted onto the lower 12.7cm(5inches) of this Rudder shaft and a removable 6mm (1/4inch) retaining pin is slipped through the rudder and passing through a tight fitting 6mm hole in the shaft, 6.35cm (2.5inches) up from the bottom.

In the 2018 GGR, Jean-Luc VDH was concerned about the 6mm diameter pin holding the Rudder on. He thought it may not be strong enough. He fitted one similar sized bolt with nut instead in the same hole. Sailing down the Atlantic, his bolt broke. He replaced it with the original pin which lasted for the rest of the voyage. The other GGR2018 Hydrovanes had no pin problems.

Damien fitted his original Hydrovane in 2021 and was happy with all sea trials. Just before the start he purchased a second unit to be used for spares. This unit included a new High-Performance Blade available from January 2022. Damien made modifications to his Hydrovane including to the rudder attachment for the new Blade. The original Blade was kept as a spare. He said the new rudder seemed a little loose on the shaft and may be better secured with two bigger bolts rather than one small pin on the shaft.

The single 6mm hole was replaced by two larger 7mm holes (Pictures appear to show threads cut into the hole increasing the diameter and changing the structure of the hole) into the shaft, above and below the original 6mm hole. The original 6mm pin was discarded. To assist with alignment when sliding the rudder up onto the shaft, Hydrovane fit a Keyway Knob. First a hole is drilled well into the front edge of the shaft. The Keyway Knob is then inserted (See Picture)

Experience has shown that after a circumnavigation there will be a tiny bit of slop, but not enough to worry about. Hydrovane have been using a 1.4inch/6mm pin for over 50 years during which the entire system has been upgraded time and again. The pin got a new ring and an upgrade of material over that time, but it is still the same 6mm diameter. Hydrovane are reluctant to make it thicker and weaken the shaft.

The rudder in the shaft does have a little jiggle and similarly the entire drive train also jiggles Hydrovane have experimented with tightening the parts only to discover that a little play is needed and not a problem. In the 1980’s I had the same discussion with Nick Franklin the builder of Aries who did exactly the same for bearing and linkages. The proof is in the millions of sea miles done annually. Circumnavigators have no reason to do anything to their rudder holes after 28000 miles. This was the case for Hydrovanes in the 2018 GGR. They just continued sailing.

Damien recovered the rudder secured by a safety line and reported a small crack on the top leading edge which “may” be damaged from the break. The Hydrovane rudder is mounted directly in line with the Yacht’s main rudder. Some believe this may increase vibration caused by the yacht’s rudder turbulence, but I doubt that is the case. The Hydrovane rudder is protected by the keel and the yachts rudder, so it is unlikely to have been hit by an Unidentified Floating Object.

From the information currently available, the new top bolt hole may have weaken the rudder shaft, contributing to the ultimate failure -break of the shaft at that point.

Tapio Lehtinen , Elliot Smith and Ian Herbert Jones are all sailing with the new high performance rudder and standard 6mm securing pin reporting no problems. The new rudder blade is the same foil shape of the old rudder, with an updated top handle arrangement and new construction materiel, but the shaft and shaft hole are all exactly the same.

Damien, who has made a spectacular comeback since his re-start in Les Sables d’Olonne, has obviously pushed the boat and gear hard. He is delighted with the repair, happy to be back in the game with the original system that he has tried and tested over many miles, in tough conditions before the start, winning the Prologue in the process, and absolutely in touch with the leaders.

As a result of these events, all entrants with Hydrovanes will be reminded to check all bolts regularly. It will be a requirement for the 2026 GGR that any modification to any windvane must first be shared with the manufacturer and GGR for comment.  NOTE: Hydrovane is a supporting partner of the GGR and responded to specific questions.

Entries open for Golden Globe Race 2026 with a revised Notice of Race!

With the success of the Race Village in Les Sables d’Olonne, the improved coverage of the race, reaching out to a wider and more diversified audience, there is already strong interest in the next edition of the GGR.

A fully reviewed Notice of Race, with new approved designs and a limit of seven boats of the same type is now available in English on the GGR website.

A major improvement for entrants over 2022 is the overhauled Conformance Section that will help entrants to tick off all requirements concerning the skipper and boat preparations as well as branding and registration processes. It includes a clear explanation of the philosophy of the race.