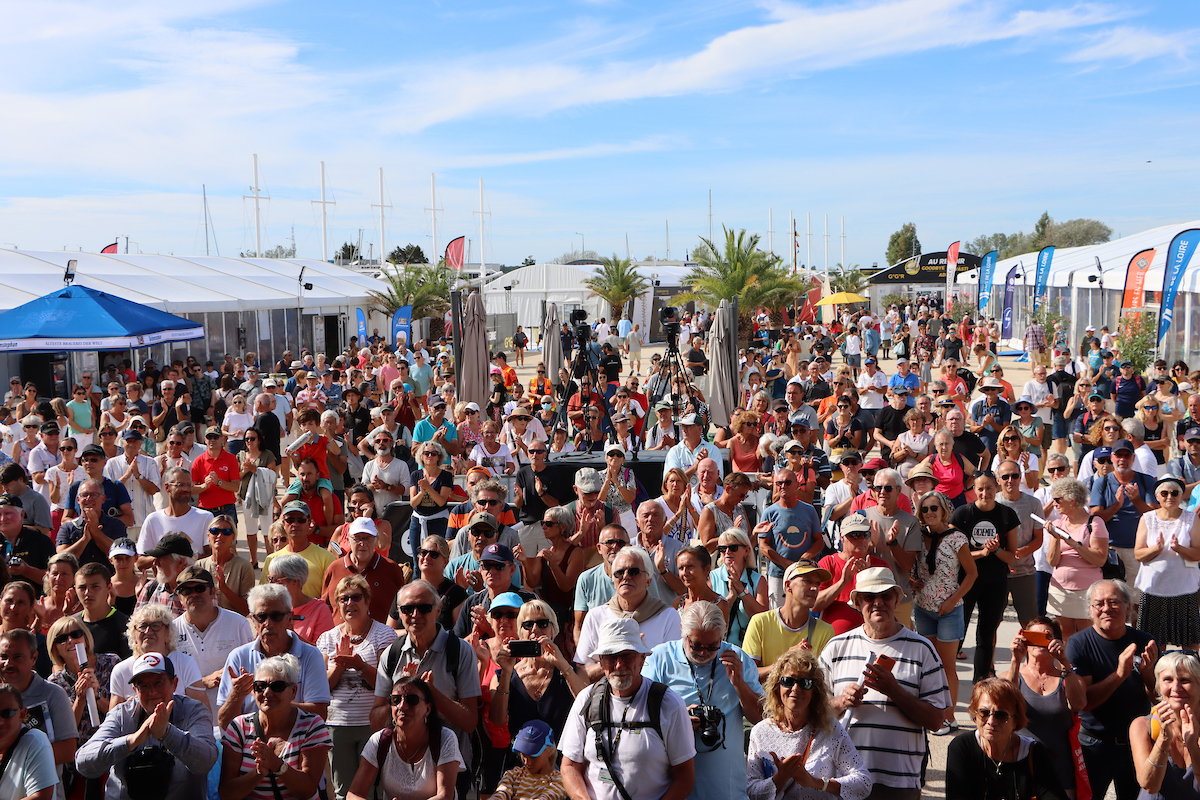 In Les Sables d’Olonne, Place du Vendée Globe, the Golden Globe Race Village is a popular success attracting thousands of visitors every day, with the opportunity to meet the entrants and discover their boats on the GGR pontoons. They can also admire the models exhibition of the original 1968 boats, and partake in the many activities organised by the city of Les Sables d’Olonne.

Les Sables d’Olonne, a city of great maritime adventures, is proud and delighted to welcome the Golden Globe Race, the grandmother of the Vendée Globe. The people of Les Sables, the people of Vendée, and visitors from all over Europe, are in great numbers and enthusiastic in the Village. Join us, all are invited to join the celebrations before the Great Departure on September 4th.

Tuesday was dedicated to safety, with entrants and their team managers having a full day of briefing covering the GGR safety information, in particular safety inspection procedures, crisis management procedures, special equipment regulations and application, critical communications as well as safety aspects of film gates approaches.

The GGR Stand has a complete model exhibition of the 1968 Golden Globe fleet that is sailing daily in front of the GGR dock. Don McIntyre and Jean Luc Van den Heede, had a remote-controlled race between Suhaili and Joshua, history eventually repeated itself with Don ultimately winning the hotly disputed contest!

Wednesday honoured the friendship between local sailors and GGR skippers, sailing double-handed on the locally built traditional yachts Les Olonnois. The colourful 21-feet wooden classics went up the legendary channel and had a friendly but contested sail in front of the Grande Plage, one of the most beautiful bays in the world.

As yachts are lined-up for the upcoming safety inspections and the delivery of the much-coveted green card, more drama unfolded on some entrants still needing to comply with the notice of race, and stringent safety regulations of the event.

Elliott Smith, who missed the Gijon communications briefing and prologue, had to set out shortly after the skippers’ presentation last Saturday for a 150nm communications check navigation, which he has completed, and should make the start.

Graham Dalton who finally re-joined the fleet after his 2000-mile offshore qualifier, equally missed the prologue and needed to set out on his communications check sail, but he now has failed his final medical stress test earlier this week and his medical file is under review.

Pat Lawless and Guy deBoer have not submitted the celestial navigation logs made during their 2000-mile qualifier voyage. They have been fined and must now complete a new 300-mile solo voyage and submit a minimum of three celestial navigation observations before they can cross the start line.

Abhilash Tomy‘s repairs on his Rustler 36 following his previous collision are going according to plan. His team cut off the damaged bow, ready to receive the new moulded one, and his mast is nearing completion, receiving a few improvements in the process.

It’s been a long road for the entrants to be here in Les Sables d’Olonne, and the Village opening paid a fitting tribute to their journey towards the start. The GGR has some of the most stringent safety checks and regulations in the world, and some entrants have not yet complied with them. It is critical for their safety and the race’s future that all the boxes are ticked, and we will help them in this last stretch leading up to the start.