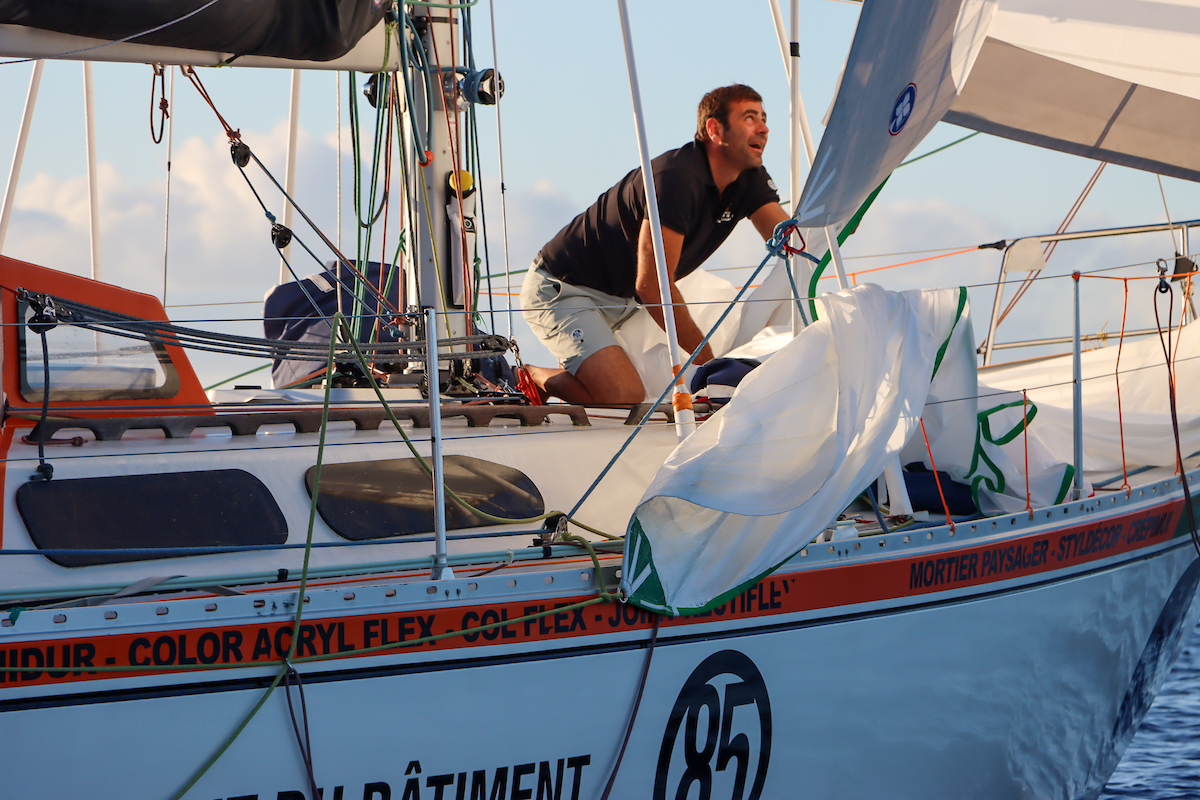 Picture Above: Damien, still competitive, dropped his spinnaker at the last minute, and hoisted it back at the first opportunity! Picture Credit: GGR2022 / Nora Havel

Damien Guillou, the French favourite for the Golden Globe Race made it through the Lanzarote Rubicon Marina film drop under his biggest spinnaker on a tight reach, this morning. A wind vane repair returning to Les Sables d’Olonne had cost him six days on the rest of the fleet. The last 12 twelve days have been an impressive comeback. He is consistently posting the top 24 hour distances of the fleet, having already caught up with the other French sailor Arnaud Gaist and the Australian mariner and GGR 2018 Mark Sinclair Captain “Coconut”.

A lack of weather information this week from a defective Weather Fax, and a high-pressure system with light winds, while the wind came back in the south, favouring the leaders, hampered his efforts to catch-up. The leader is 700 miles ahead. The mid-fleet pack is only 3 to 4 days ahead.

The Bay of Biscay, I sailed it twice! The first time it was hard in strong winds and seas right  from the start, and the second time I had different conditions with lighter but more unstable winds, before getting over 30 knots upwind at Cape Finisterre!

He said before he hoisted the spinnaker back and resumed racing.

Another impressive comeback is Kirsten Neuschäfer (SA) who exited the Bay of Biscay in 10th position. She did not hide her disappointment at being 6th at the Lanzarote gate. She has now joined the lead pack in 5th position and has been working very hard, spending a lot of time at the helm of Minnehaha, to catch up. This morning, she averaged 7 knots over the last 24 hours, clocking 170 miles and gaining 55 miles over her closest competitor Abhilash Tomy (IND)!

With strong Northerlies today where Minnehaha and Kirsten excel, there’s no doubt she will close further onto the leaders. The other South African in the race, Jeremy Bagshaw, 6th in the fleet sailing the smallest and lightest yacht in the fleet, posted the second-best performance over 24 hours with 154 miles, nearly 6,5 knots average, clearly pushing Oleanna in those favourable conditions

US entrant Elliott Smith made the most of his Lanzarote gate motoring on the leeside of Lanzarote then deciding to anchor off Playa del Pozo under a bright red sky. Taking advantage of the lack of wind to rest and do maintenance without letting the fleet escape. There’s more than one way to sail the Golden Globe, and Elliott’s take on the adventure has been authentic and inspiring from day one.

I’m realising how long it is and I want to pace myself. My headspace is good and I feel clear. There’s been high and lows but the main take away is trying not to focus on being pleased while I’m out there. Don’t search for meaning and purpose in what I’m doing,instead, just do it, you’ll find the joy in that.

All the joys so far in the trip have come totally by surprise, they are not the ones you’re looking for, they just happen.

US entrant Guy deBoer whose yacht Spirit ran onto rocks north of Fuerteventura has shared the story of his grounding, WHY and HOW, with Don during a phone call yesterday, which you can catch here. Spirit is still on the rocks, but all fuel and hazardous products have been taken out of the boat which poses no threat to the pristine environment of the island. Guy met with two local salvage companies while keeping close contact with the authorities to find the best way to remove his yacht from the beach. One scenario is to bring a telescopic mobile crane on the beach and lift Spirit off the rocks which would limit damage to the boat. A large swell is expected on Monday so they race against the clock.

After going through the gate in Lanzarote, I was awake for 30 hours, and I chose to go West of Fuerteventura, it was close-hauled but I was sailing 30° over the island and was safe. The moment I sat down I fell asleep because I was so fatigued.

The reason I hit the rocks is because the wind velocity dropped off significantly and the boat bore away towards the island and I was not aware of that before the boat hit the rock.In insight I should have gone on the east side and avoid the leeshore He concluded: it was a bad decision by the skipper and I’m paying the penalty for it today.

A tropical storm currently forming off Dakar in Senegal gaining in strength Friday and crossing the path of the fleet, moving North on Saturday. While the early predictions were announcing a possible Cape Verde Hurricane, this is now a localised low-pressure system. The GGR race Control informs the fleet daily of the system’s strength, position and movement to help them make the best decision.

Simon Curwen (UK) is taking advantage of his lead position to go around the low on the west side, taking strong northerly winds pushing him towards the Cape Verde archipelago and the doldrums. Tapio Lehtinen (FIN) is racing to get past before it moves over him and it may be a close call but he is ready for heavy winds. The rest of the fleet is hugging the coast off Africa, East of the low to face the lowest possible headwinds.

This means that Simon and Tapio will certainly increase the gap between them and the fleet but could mean changes within the lead pack itself. We know from the Bay of Biscay that Pat Lawless (IRL) excels in adverse conditions and could consolidate his lead, while Kirsten and Abhilash, now at VHF distance could emulate each other’s in a quick upwind exit, breaking up with the rest. Meanwhile, back in the Canaries, should Damien Guillou get some good weather forecast, he could well make most of the adverse weather at the front of the fleet!

Video film coverage and 20 minute interviews of all GGR sailors passing through the Rubicon Marina film drop gate are available on GGR YOUTUBE.