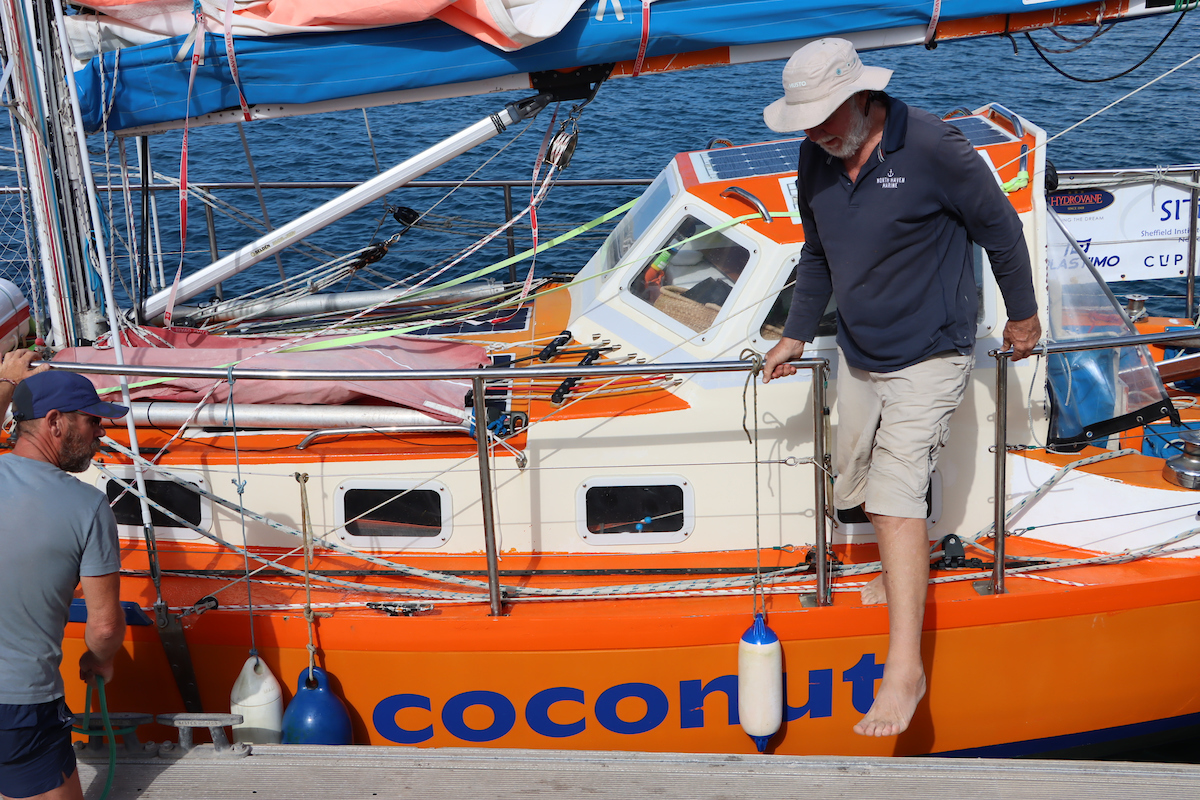 Picture Above: Captain Coconut Mark Sinclair, the hero of the GGR 2018 and only Chichester Class finisher pulled out  in Lanzarote. Credit GGR22/Nora Havel

A week after the fleet crossed the Lanzarote gate, Simon Curwen (UK) is leading the fleet into the Doldrums through the 10th parallel, where the elastic fleet expands and compresses depending on the conditions.

This week, it’s been mainly compression for the leaders Simon Curwen (UK) and Tapio Lehtinen (FIN), who after making most of their time west of the stormy low-pressure system are now hitting the windless wall of the Doldrums. With the wind strengthening from the North, the back of the fleet has made good progress on the leaders, and the mid fleet pack. This benefited Damien Guillou (FR) in his chase back to the top, reducing the gap from 700 miles in Lanzarote to 500 today.

There were a few changes in positions for Kirsten Neuschäfer (SA), 5th in Fuerteventura and her compatriot Jeremy Bagshaw, a close 6th then. Kirsten, spending long hours at the helm posted the best daily average with several days around 170 miles, enabling her to close on Abhilash Tomy (IND), eventually stealing 4th place from him before chasing Pat Lawless (IRL), himself catching Tapio Lehtinen (FIN), 200 miles to the east of him.

Jeremy Bagshaw (SA) who is no stranger to bold moves and options, broke away from Kirsten last Saturday for a western route into the Cape Verde islands looking for fresh winds, which he is currently clearing, but lost 3 places in the process, falling from 6th to 9th place. He is currently sailing in fresh winds 350 miles west of Elliott Smith (USA), and now has Damien Guillou (FR) and Ian Herbert-Jones (UK)  following his track into the islands.

The doldrums are a windless belt around the equator where the NW trade winds of the northern hemisphere collide with the SE trades of the southern hemisphere. The heat forces the hot, humid air into the atmosphere where it transforms into pouring rain after cooling down.

This zone of weak, erratic winds, hot weathers, squalls and showers was feared in the ancient times where ships could stay for weeks at a time. Today the doldrums are no longer a danger, but for the GGR entrants with little outside communications, they can still play with the nerves.

Crossing the equator will be a first for many and the pinch of isolation is becoming real with several entrants sharing that they are missing family and friends. Others had quite surreal experiences such as Elliott Smith (USA) experiencing special offerings from the Saharan winds.

It was a night of storm and lightning, and the next morning I wake up and there was dust everywhere, orange dirt, four dead birds on the deck, some of them decapitated, flying fish everywhere, grasshoppers and crickets, and then a big black nasty looking locusts as big as my thumb. This is when I realised I had left the hatch open…

Elliott said on his weekly call on Wednesday, sharing how big an adventure he had taken on.

Many have ongoing problems heading in the southern hemisphere: Ertan Beskardes (UK) who experienced early electrical problems with a short-circuit and smoke, called Race Control this week reporting batteries issues, not keeping charge and that he was struggling with his power management. He had planned to stop in Cape Verde Islands for repair and continue in Chichester Class, but later decided to soldier on through the doldrums and try to solve it. He is running on minimal power now and it is obvious the batteries have been seriously damaged. He is prepared to finish the Race without power, using his emergency solar system to recharge critical safety comms.

Guy Waites (UK) has been working on his staysail cars, and spinnaker pole issues Arnaud Gaist (FR) has been working on deck fittings, preserving his sails and is shocked at some of his running rigging that is chafing excessively.Elliot Smith re-positioned and re-stitched his mainsail clew, and found most Luff slides on the mainsail battens broken. Ian Herbert Jones is frustrated at being so far behind, but realises that for him, it is all about the voyage and enjoying the journey. Kirsten Neuschäfer seems the happiest she has been since the start and feels back in the Race! Listen to her latest weekly call here

All are taking advantage of the doldrum to maintain and prepare the yacht for future trade winds. They find solace in their regular HF radio session chats, comparing positions and passing on weather information.

Meanwhile this week, Captain Coconut Mark Sinclair, the popular Australian sailor decided to pull into Lanzarote and retire from the GGR 2022

I wanted to start this edition but it was a big effort to get ready and I think I am just tired. I had planned to make landfall in Cape Town and attend my son’s wedding, continuing the voyage in Chichester class, but it’s been a slow start and I am now two weeks behind schedule. I won’t be in time in South Africa, and probably not at the Hobart gate before January 31.

Mark, a former Australian Navy commander and cartographer, also mentioned some medical follow-up and surgery and other pending issues since he has been away from home for ten month. He left Adelaïde in December 2021, crossing to Les Sables d’Olonne in 174 days, spending another 100 days full time without a break to get Coconut ready for the start with little time for anything else.

Meanwhile in Fuerteventura, Guy deBoer (USA) has reunited with his Tashiba 36 Spirit, which has been lifted off the rocks where he landed on September 18th. Spirit’s salvage involved building a sand road for the mobile crane and the low-bed truck to get to the boat, getting the mast off and lifting the boat onto a low-bed truck. Driving it out was easy without extra damage. Sadly, the boat has been visited in the meantime, with a significant amount of material including the Hydrovane, Watt & See generator, winches and other material were stolen for a value exceeding USD 50,000.

In Fuerteventura, a chain of solidarity formed around Guy and his injured yacht, some local friends having found a piece of land for Spirit’s repairs.

It looks like I’m sorted, the landlord is friends with the crane operator who is ready to bring Spirit to the property and set-it up. We’re now getting the wood to build Spirit’s cradle.

Said Guy deBoer. It’s a relief for the American sailor who had been frustrated in finding a solution for his boat.

This week is all about the fleet compressing from the back as the leaders are hitting the doldrums hard, but next week should be about offerings to Neptune, and the Southern trade winds toward the next mark: Trindade Island!

Watch out for entrant onboard footage being released on GGR Youtube Here!