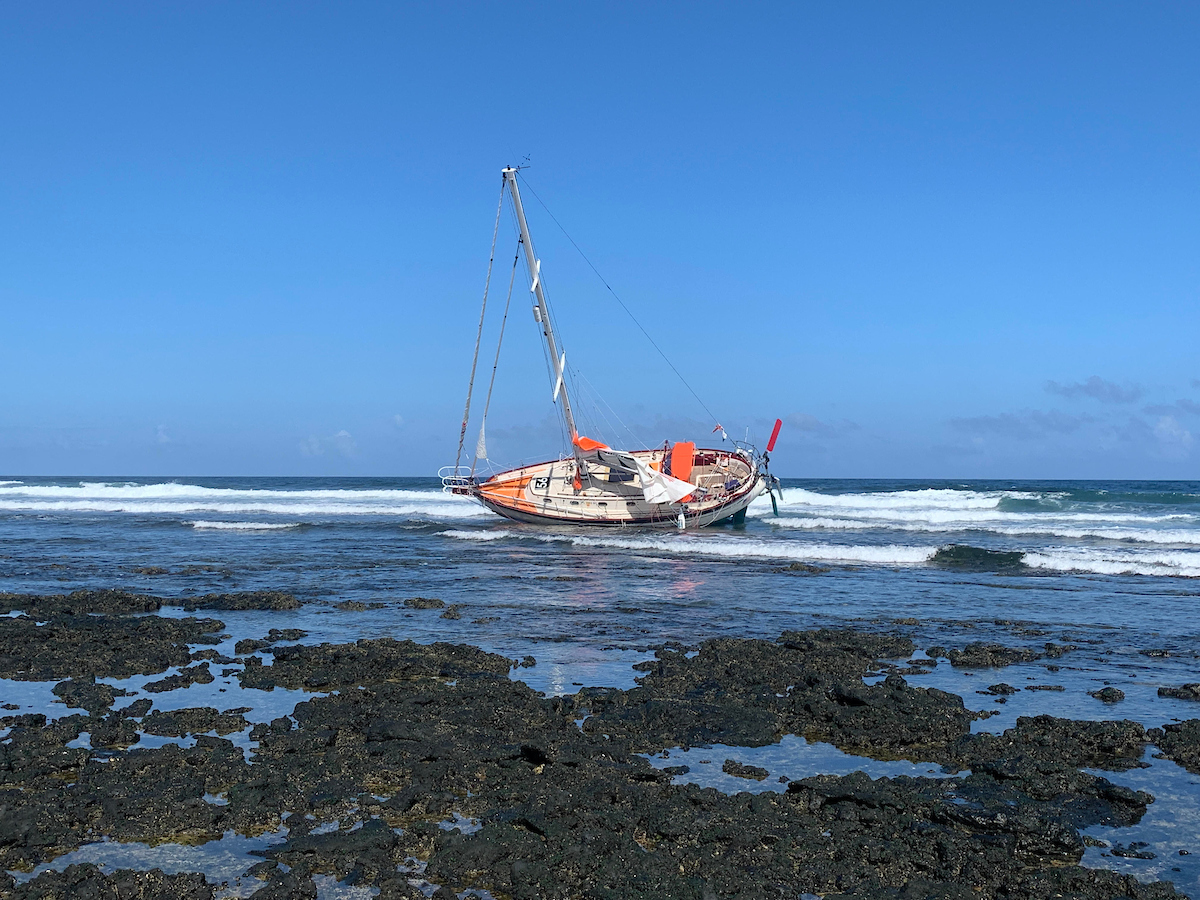 Guy’s Tashiba 36 had run aground on the North coast of Fuerteventura, just 10 miles from the Lanzarote Marina Rubicon film drop gate he had passed a few hours before. He had activated his EPIRB and at 04:24 UTC rang the GGR Race control on his Sat phone.

“Spirit” was sitting on rocks, away from the beach, tilting 45°, being pounded by heavy seas crashing over the boat.

The surf was pushing her slowly forward grinding over rocks. Guy who was in constant contact with Salvamento Maritimo, the local Rescue Coordination Center and GGR Race Control, was in a serious situation.

He had his life raft ready, but decided to remain inside Spirit, which was holding up. He planned to wait for daylight since he could not see the coast.

The conditions for a safe use of the life raft, or exit onto the rocks beaten by the surf were not right.

At 04:10 UTC the MRCC Las Palmas informed GGR Control that first responders were on the beach, 50m from the boat sitting on the bedrock. Conditions were difficult and Guy decided not to evacuate the yacht. At 04:36 UTC Guy finally abandoned his yacht by foot, greatly assisted by the local police and firefighters. A Government salvage tow boat was already en route towards them. Guy was taken to a local hotel without injuries.

Following an early morning Government assessment, it was considered too difficult to tow Spirit back to sea at high water. The authorities decided to pump all fuel from the boat to avoid a potential spill and are now working with Guy deBoer’s team and an insurance company on salvaging the Tashiba 36 with the least environmental impact. The area is a popular tourist surfing spot.

At 9.30 Monday morning I am meeting with a large salvage company to consider the best course of action which, at this stage, looks like dragging her back over the hard rocks, fortunately not fragile reefs.

She has an incredibly strong and thick hull so should be able to take that ride! She has taken a pounding so far and the hull is fine. I hope to see her sail again, but certainly we cannot just leave her there.

Golden Globe Race wish to thank all those rescue personnel who responded so professionally and quickly to a very demanding and difficult situation which had a positive outcome.

The mood was very different earlier that night and the day before as a freshly shaved Guy deBoer went through the Lanzarote Gate happy and confident to be in 5th position. Kirsten Neuschäfer could not hide her disappointment at being 6th crossing the gate 25 minutes after deBoer. Her Cape George 36 had sailed out of the Bay of Biscay unscathed and was in excellent shape, although she was tired from the long hours under spinnaker at the helm of Minnehaha, even if, as she said:

The boat doesn’t need me and can sail by herself.

Hours before them, Pat Lawless had beaten Abhilash Tomy in their week-long fight for the 3rd spot. Pat’s option east of the fleet cost him dearly earlier in the week but enabled him a magnificent come back on Friday and Saturday. Pat’s enthusiasm is infectious and he was radiant when told his position in the fleet!

Infectious also is his right knee, a pre-existing medical condition to the GGR which has come back unexpectedly during the first week of sailing. Pat is in regular contact with the race doctor, MSOS Direct, and taking antibiotics as advised. He was advised to stop in Lanzarote to stock up with stronger antibiotics on board, but this would have meant losing contact with the leaders, as well as accepting external assistance and being moved to Chichester Class.

This is an old injury that has come up after crawling on deck. There is no way I want to move into Chichester Class, not for a minute, so I sail on! It will be fine.

He could reconsider this decision if it gets worse and make a stop in Cape Verde Islands in a week or so sailing south.

Abhilash Tomy holds 4th place and revealed during the film drop that after leaving Les Sables d’Olonne he suffered for 10 days with severe PTSD syndrome. He could not eat for those 10 days. Re-living his rescue and severe back injury inflicted during the 2018 edition of the GGR upset his ability to concentrate. This reaction surprised even himself. Now he is back into the 2022 edition with real focus and determination.

A few miles ahead, it is Simon Curwen in his Biscay 36 CLARA solidly in the lead after breaking away from Tapio Lehtinen who chose a less direct route under his biggest spinnaker in a bid to find stronger winds. He didn’t. Both were very satisfied with the result, although they too, were disappointed for Damien Gillou. They were definitely looking forward to a direct confrontation with the French favourite now still 550 miles astern!

While the tight mid-fleet group of Guy Waites, Michael Guggenberger, known as Captain Gugg , Ertan Beskardes and Jeremy Bagshaw have all gone through the gate over the weekend, the remaining miles will be more challenging for Elliott Smith and Ian Herbert-Jones. A big wind hole arriving from Madeira is taking over the Canaries and is meant to stay until Tuesday, slowing down their progression towards Lanzarote.

750 miles further south from Lanzarote,  just to the east of the Cape Verde island on the African coast, a tropical depression/hurricane may be forming on Thursday 22nd and building into Friday 23rd. Forecast winds are expected to be around 50kts. This is right in the path of the GGR leaders and middle fleet. GGR control is monitoring it closely.

Another interesting week ahead!