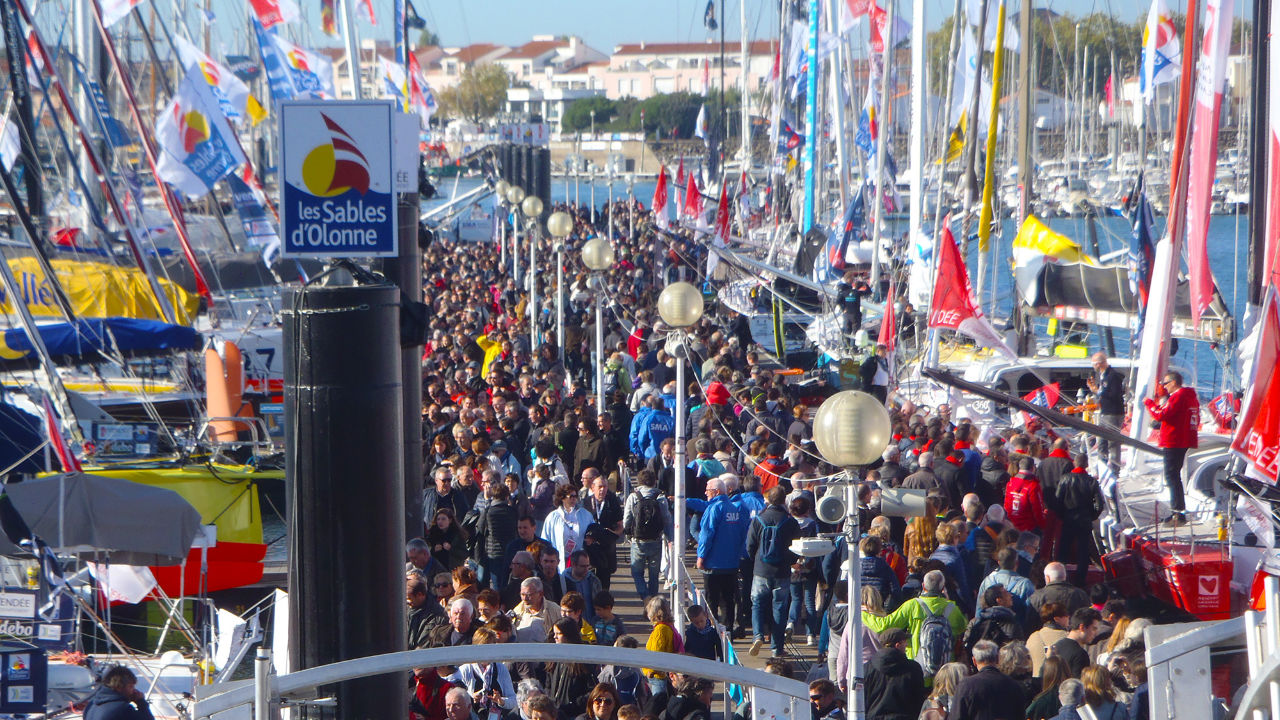 I was fortunate to spend time at the Vendee Globe Race Village before the start and came away with lasting impressions.

I mentioned in the last newsletter that this race evolved from Joshua Slocum and Chichester to the 1968 Golden Globe and then 1986 BOC Challenge Sydney stopover. As BOC Sydney Race Chairman at the time, I remember the birth of the idea well with Philippe Jeantot, Jean Luc VDH and others sitting around wondering what next? Phillippe drove that idea into reality and now evolution has pushed the Vendee beyond floating hulls to flying hulls. The level of interest from around the globe is staggering.

My friend Jean Luc opened all the doors at Vendee and I was welcomed by the organisers and all involved. The enthusiasm of their team and the huge number of volunteers was infectious. The atmosphere was electric in the village and on the dock with a sense of living the moment, just in the village. The organisation and delivery of the experience was impeccable. Kids were everywhere, eyes wide open dreaming. It was quite extraordinary and simply inspiring. The start day was something else altogether, with huge community and spectator pride. The sailors were heroes and rightly so. It was a typical French affair with passion and flair pushing out to the world an image and brand that you could never buy, or even pay for. This was beyond the ordinary and then the sailors were alone. It was a beautiful day.

And now ALEX the BOSS is holding the lead…. can this all be true? and for how long? WOW!

The French people, not just sailors, have a living breathing connection to the adventure of the sea and shorthanded sailing. Jean Luc and Lionel Regnier had their boats on display at the Vendee race village. Interest was strong and sincere. The French know the 2018 Golden Globe Race now. When sailors heard I was there, they came to ask good questions. Many of the big names from the past and present are watching closely, as are new sailors with dreams. They understand it. There is no doubt that French sailors discovered the 2018 GGR late. The Entry list was already full, yet still they are the largest flag group of entrants.

The Golden Globe Race is reverse evolution and I am happy to see people understand the WHY. It is exciting. The Vendee will always lead, but we are sisters in so many ways and in the same race, with the same heritage.

So now we embrace this French connection with excitement. Denis Horeau the previous long term Race Director of the Vendee Globe is welcomed as part of our management team along with Celine Trommenschlager, as our GGR French co-ordinator. Our new GGR web site and all future media is French and English to support our growing French followers. Our 2016 GGR Entrants conference is scheduled for Dec 5th at the Paris Nautic boat show and on the 6th Dec. at 11.30hrs we will hold a Press Conference- media briefing and public presentation on the central stage. Seventeen GGR Entrants from around the world will be presented that day. You are all welcome to attend. I hope to see you there.

With 15 countries represented in our fleet, we have a truly International Race. The level of interest from new stake holders and sponsors in the GGR is building and our commitment to them grows. Whilst we hope to start in Falmouth on June 16th 2018, that final decision on venue is being reserved until the second quarter of 2017, so that the best possible venue, offering the highest level of support is chosen for the benefit of all.

These are exciting times for us as organisers. The race is progressing on many fronts. We are all working long and hard to capture this moment in history. Personally, I must say thanks to Barry, Jane and Annette as the founding team. We wish we could tell you some of the incredible things developing, but we must wait. What I can say though is be ready, it is all very good!

The relationship we have with the GGR family of entrants continues to mature. More have dropped out. Our wait list shrinks. It is a wholesome process that creates real emotion from those retiring and those joining. There is a sense of loss from friendships built on a common dream. It highlights the human side of this journey and a Race that begins way before the gun. While the Entry List is full, there are three Special Invitations yet to be offered. I am living in hope that another woman will appear, like a vision to balance the act a little. She would surely receive our support and consideration, even from Susie our only other lady. Where are you?

In Australia, Shane Freeman sets sail on his Tradewind 35 from Melbourne to England, non-stop on Dec 11th. He will sail via Cape Horn to be at the GGR start ahead of time! It is his serious training for the Race and represents half the actual course, but he sails with piston hanks, not roller furling, so watch this space. His only regret is not being able to be at the Paris conference. Kevin Farebrother is about to sail his Tradewind 35 from Sydney around to Perth, then start his refit. Mark Sinclair in South Australia is working incredibly fast with a full team of shipwrights, riggers, engineers and sailmakers about to complete a massive rebuild of COCONUT, his Lello 34. In two weeks, we will be able to announce the story behind an Australian entry currently building a new Suhaili Replica.

In France Philippe Peche finally relaunched his Rustler 36 after a complete refit and then had to immediately return to work in Perth Western Australia, leaving his father to manage the campaign. Following the Vendee, Lionel Regnier moved his beautiful blue Rustler 36 ONE AND ALL into a shed to start his race refit. He has a team of over 20 supporters making up a Not for Profit Association. This supporters group has been together nearly 20 years assisting Lionel’s sailing exploits! Celine our GGR French Co-ordinator is also Lionel’s project manager and was working with the Vendee organisers. Jean Luc VDH has announced his sponsor, French Insurance company MATMUT. They also have an entry in the current Vendee Globe. He recently relaunched his Rustler 36 and is preparing for some hard-North Atlantic sail training.

In the UK Ian Reid has delivered his Endurance 35 to the Falmouth Boat Company alongside Antoine and Nabil’s Biscay 36’s all now undergoing complete refits in the same shed! Susie Goodall has – GONE SAILING! In her new Rustler 36 but will return in time to be at the Paris conference. After a potentially serious car crash, Tim Newsom continues the refit on his Baba 35 and has decided not to sell bottles of sweat after all! The surprise news I am happy to say, is my UK friend from the 1990 BOC, three times circumnavigator Robin Davey has joined the ranks of the Wait List crew. This is his retirement project. Robin has many stories to tell including sailing around Cape Horn under spinnaker pole jury rig, having lost his mast in a storm a few thousand miles before.

In America Istvan Kopar has painted his newly restored Tradewind 35 hull a beautiful shade or Orange/Red? Or maybe Red/Orange? you can decide! Naree Cornuz our only Swiss Entry is headed to Cape Town shortly to start the first phase of refit work on his Lello 34 before sailing it to the Mediterranean. Are Wiig our Norwegian entry, just built the most beautiful fixed dodger on his OE32 that I have ever seen, on any yacht, anywhere in the world. It is a work of art. It perfectly matches his rather stylish Scandinavian yacht. He then immediately set sail into the Baltic and North Atlantic for trails.

If you would like to see all the pictures or keep up with the latest from Entrants, you can link to their individual web sites and Social Media pages from the SKIPPERS section of the GGR website, or LIKE the GGR Facebook page.

Finally, while in Vendee I visited Bernard Moitessier’s beautiful JOSHUA. She is an Icon with a real presence about her. You can touch Moitessier and bring his black and white film images to life just standing beside her and dreaming. This for me was nearly as exciting as seeing SUHAILI for the first time. In France, she is a protected Historic Monument by Government Decree. We delivered an official invitation to the La Rochelle Maritime Museum, owners of JOSHUA, to be part of the 50th celebrations and we believe they will come!

Andy French one of our growing list of GGR Volunteers helped us recently purchase a 1969 Kingfisher 30 yacht, THE EXACT model chosen by Sir Chay Blyth as his entry into the 1968 Golden Globe. With support from Rustler Yachts in Falmouth we hope to transform this yacht into a replica of Chay’s entry DYTISCUS III to be part of the 50th celebrations. The original was stolen from a mooring not long after Sir Chay returned to the UK and was never seen again.

To our new subscribers and especially to our new French supporters, WELCOME. Please tell your friends something special is building, that is more than just a race. It is a glimpse at life and human endeavour in it’s purest form.

See you in Paris maybe?… THANKS for being part of this.