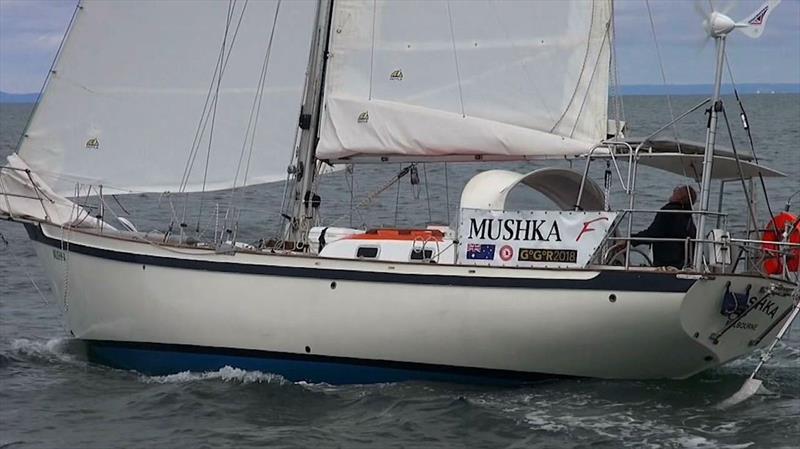 One of our four Australian entrants Shane Freeman is on his way to the start and is soon to round Cape Horn. Sailing solo from Melbourne to the UK is not without its challenges. Three days ago, he reported steering failure at 47 deg. South Lat. while about 1500 miles from the Cape. Fortunately, he was in mild weather and after some considerable effort, he has been able to rectify the problem.

Of even greater concern was his toilet outlet, which blocked and he has had to revert to a Bucket-n-Chuckit system. This is Shane’s first major solo voyage and already, more than once he has been contemplating the issue of WHY? He considered at one point heading up to Tahiti rather than face the much greater challenges ahead, not just of Cape Horn, but of being part of the Golden Globe Race itself. Shane wears his heart on his shoulder. His blogs and video diaries are quite something. You can link to them from his SKIPPER profile on the GGR website.

There are now three Tradewind 35’s entered. A Bright orange hull from Istvan Kopar and a more traditional Red White and Blue version from Kevin Farebrother in Australia and Shane.

Susie Goodall is currently training on the first leg of a double Atlantic crossing in her Rustler 36 and indications are that her toilet is doing fine. Jean Luc VDH on the other hand prefers a Bucket-n-chuckit over a hard seat any day, so that is all he uses. He is out training in his Rustler 36 MATMUT for a couple weeks in the north Atlantic checking his new mast and rigging. Others are working hard with boat refits, chasing sponsors, learning celestial navigation or trying to earn money. Just a few are out hunting for a boat. With only 4.5 months left to secure it, or lose their entry, the pressure is on.

With the second round of entry fees due, there have seen quite a few provisional entrants drop out to be immediately filled by those sitting patiently on the Wait list. The Provisional Entry list remains full, but the Wait list is now officially empty. Whilst those retiring are obviously a little sad, I must say their replacements are excited. It is the way with this type of event, where the effort to get to the start line is in many ways the real battle. As this transition continues, those that remain are the strong ones, totally committed to their dream. The current provisional entry list is on the SKIPPERS section of the GGR website.

A group of completely new sailors are responding to this new opportunity to join the GGR. A wave of enquiries has begun from America, Australia and Europe. We fully expect to see the Wait List grow again very soon.

The recent exciting finish to the Vendee Globe with Alex Thompson from the UK nearly causing an upset to the established run of French victories, has stirred the imagination of many. Suddenly in the days surrounding that huge finish, we have more than a few enquiries from French sailors about the 2022 GGR?

That GIANT Golden Globe Race GLOBE made an appearance at the London Boat show on centre stage mid-January with a few of our skippers, their sponsors and Falmouth Boat works who are refitting three yachts for entrants. Barry Pickthall interviewed them all and kept the crowds entertained.

Our enthusiastic meetings in both Plymouth and Falmouth has caused a flurry of activity. We are confident that this unexpected competitive process is good for the Race. Both parties are working hard to secure the Start-Finish port status. We are very grateful for their ongoing efforts. It is our intention to decide as soon as we have received all final proposals and no later than April 1st.

Over the next few months we will start our search for the GGR Race Director (who must speak fluent French and English) and our Assistant Race Director. These are exciting positions that will at times be quite demanding. The transition to full time activity from late this year, will be preceded by a period of part time effort via mobile office, commencing Mid-Year. If you or any of your associates are interested and believe you have what it takes for either of these rolls, then we would like to hear from you. You would join an interesting team, creating something from an idea that is attracting global interest.

To keep up with GGR life leading up to the start of the 2018 Golden Globe Race, you can follow the GGR Facebook Page.