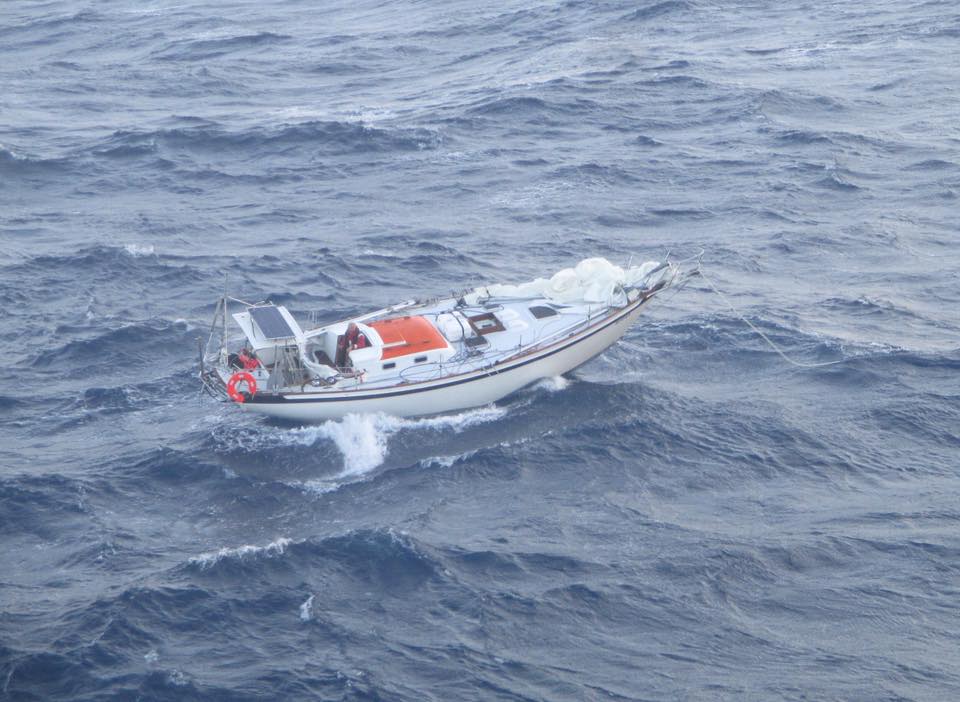 Australian Golden Globe Race entrant Shane Freeman was forced to abandoned his yacht MUSHKA whilst attempting to sail solo around Cape Horn on his delivery voyage to England and the start of the Race in 2018. He was approx. 300 miles from the Chilean cost at the time.

Shane was making slow progress from Melbourne and had been at sea for nearly 68 days when he experienced a sever knockdown that dismasted his yacht. This was the final blow that ended a run of smaller issues, ultimately leading Shane to make the hard decision to abandon his yacht. He was recovered by a passing Chinese ship.

Shane rang me from that ship shortly after being picked up. The following notes are from that conversation. Shane has just arrived back in Melbourne, happy to be reunited with family and friends.

Shane had suffered a knee injury a few days before the knockdown which was painful black and purple. On the day of the knockdown winds were 25-45kts. LOG: Feb 18, 0340 UTC; LAT:51’45″S LONG: 85’04″W Shane was knocked down. It was blowing 35-40kts W/SW… NOT huge seas just typical Southern Ocean. He had been hand steering all day. Two weeks before his windvane steering failed as the mounting frame was bent up 40 degrees as a result of his Drogue bridle streaming astern hooking the Mountings and causing irreparable damage that could not be fixed at sea. Before going below that day he had set the boat up to sail itself slowly with just a storm jib, sailing about 150-160 true heading down to round Cape Horn. Waves had filled the cockpit three times that day.

He went below and had cooked a meal. About two hours later he was putting things into a locker and then about to get into his bunk. He heard the loud roar of a BIG breaking wave and braced himself. His world went upside down in chaos. He was not sure if he rolled over 360, but thinks it was just a severe inverted knock down to 140-170 degrees. Very little water came below.

On deck the mast section had simply collapsed, as all chainplates and rigging was intact with no breakages of wire or fitting failures, yet the mast section was in two pieces. The top section in the water about 4-5 metres out from the boat on wire …the bottom section laying partially on deck, with the boom in the cockpit still held by the Mainsheet. It took 5 hours to clear everything away to stop damage to the hull, saving the boom for a possible jury rig. The mast took out all stanchions and wires and he had two spinnaker poles on Deck secure.

His knee was aggravated and hurting, the life-raft canister and life-raft itself appeared damaged. Shanes support crew in Australia had advised all relevant authorities and Chile advised them that two ships were close by…Shane then continued to asses Jury rig options, no windvane, not enough power for effective use of electric wheel pilot (wind generator damaged in NZ) and decided risks were mounting and after about six hours deliberation, concluded the sensible thing to do was accept a pick up from one ship, now only a few hours away.

Chile Launched an aircraft to confirm his position. To continue he had 600 miles to make to port along a potentially dangerous lee shore. This was now a planned abandonment from that point on, rather than a full RESCUE. He was impressed with all the support given to affect his recovery. Sea cocks were opened to sink the boat as Shane evacuated it.

Shanes Satellite phone gave effective communications and his support team in Melbourne handled all procedures well. The Captain and crew of the Chinese flagged Bulk Carrier Frontier Ambition did an excellent job allowing Shane, with some difficulty, to effectively step off dry after passing some bags on board. MRCC New Zealand and Chile co-ordinated the evacuation very well.

In the past four weeks, I have sent out five invitations to interested sailors who have requested to join the race. There is no one currently on the Wait List and we have one new entrant Mark Slats from Holland who is currently out looking for a yacht. Her sailed solo non-stop around the world in 2012 in a hull that was a replica of Sir Francis Chichester’s Gypsy Moth V. He was the first Dutchman to do so.

Susie Goodall has arrived on the other side of the Atlantic on the first half of her shakedown before final refit. Jean Luc VDH has completed a few more weeks in the stormy, cold -5 degree North Atlantic training. He also carried out the final real world tests of a specially commissioned GGR AIS ship alarm, that will be mandatory for all entrants. He reports that it performed extremely well and will be a useful aid in alerting skippers of shipping close by, if that ship has it’s radar off, but it’s AIS on, which is sometimes the case. All GGR yachts are also fitted with a radar alarm and transponder.

Whilst some entrants will soon be announcing major sponsors, Loic Lepage from France is happy to announce that he raised over EURO$10,000 through his crowd funding to help buy necessary equipment. Mike Smith in Australia is in a race to complete the structure of his Suhaili Replica, so he can ship it to Cape Town in South Africa for final fitout and then an Atlantic delivery voyage to the UK. He has now completed standing all frames and starts work on the hull any day.

Mark Sinclair in South Australia finally has his yacht Coconut back together after a complete rebuild and massive strengthening of the standard Lello 34 design. With a solid stainless steel rail now fitted all around, Mark’s naval background seems evident! He is out sailing as often as possible. Gustavo Pacheco from Brazil is currently looking for another Lello 34 to buy and rumour has it, that there could be another OE32 about to join the Ranks of yachts entered.

All current Provisional Entrants must have nominate boats by end of June. Shane will remain listed as an Entrant until we hear otherwise?

As the Vendee Globe winds down with final entrants closing the finish line, epic stories are being told. As they wind down, interest from French media and fans continues to grow in the GGR. Publishers are talking about new French editions of the original 1968 Sunday Times Golden Globe race books and there are more than a few new Documentaries in the wind, about to retell this classic 1968 adventure. No news yet on the release date of the Hollywood epic THE MERCY staring Colin Firth as Donald Crowhurst.

If all goes to plan we hope to announce the official 2018 GGR Host Port in the next Newsletter.