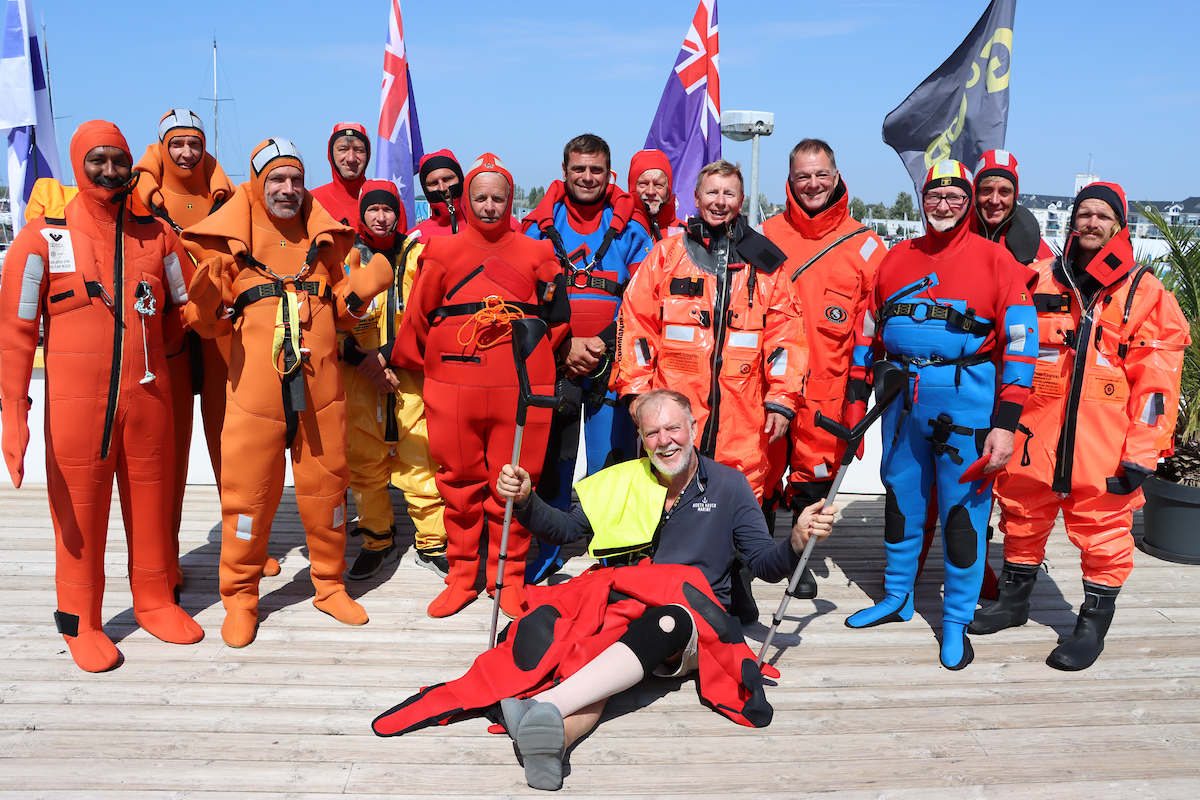 Picture Above: Tapio Lehtinen in his survival suit. All of the skippers underwent sea survival training before the race start. Credit: Nora Havel/GGR2022.

Many people talk about the eye watering effort GGR entrants make to meet the tough safety and qualifying requirements of this gruelling mind game called the Golden Globe. When all the boxes are ticked, they finally receive a “green card” in Les Sables d’Olonne just before the start.

These unique GGR safety regulations have played an important part in saving Tapio Lehtinen following the sinking of his yacht in the Southern Ocean and he appreciates it! Two other entrants have rigging issues after 80 days at sea and Kirsten sets a new 219-mile day record! But the big question is… where are the Roaring Forties?

Golden Globe entrant Tapio Lehtinen (FIN) rescued from his life raft last week is currently enjoying the hospitality of his rescuers Capt. Naveen Kumar Mehrotra and his crew on the M.V. Darya Gayatri bound for Rizhao, China. He has no money, no passport, and no glasses, but is in good health and good spirits. He has now shared information with the organisers regarding this incident and rescue. He does not know for sure what caused the failure and sinking of his yacht Asteria and is still coming to terms with the loss of his beloved yacht.

The accident was a devastating surprise, I had 100% confidence in Asteria being fit for the fight. She performed beautifully and I was very happy and proud of her. After a total rebuild four years ago for the 2018 GGR and being fitted out and inspected again this year, being flooded up to deck level in five minutes and sinking twenty minutes later in beautiful summer conditions is beyond my comprehension.

But the rock-solid professionalism of Don McIntyre in coordinating the rescue operation together with MRCCs in Cape Town, Kirsten Neuschäfer, Abhilash Tomy and m/v Darya Gayatri captain Naveen Kumar Mehrotra came as no surprise to me. On the contrary, already before the start of the race, at a safety briefing in Les Sables d’Olonne, I told my competitors that if we’d get into trouble, we would be in the best of hands. I never imagined that I would be the one.

Thank you, Don – getting into the raft in a rush without my grab bags of food, medicine and water, I knew that it wouldn’t be a long stay.

When Tapio woke to a loud bang, he stepped into knee deep water with more flooding like a river from the engine compartment. With no time to think, he prepared the Plastimo “special edition” GGR life raft in the cockpit and donned his dry survival suit, grabbing the small GGR communications emergency grab bag on the way out. With the raft inflated beside the boat, the securing line he had re-set with a slip knot, unfortunately let go! It began drifting away. He could not go below for the main grab bag, as water was above waist height and the decks were awash, so he jumped for the raft now 3 metres from the boat. He had been unable to reach his EPIRB inside the boat, which later automatically water activated, sending the first DISTRESS alert. But it went down with the yacht 20 minutes later taking his two other emergency beacons with it.

Fortunately, GGR safety regulations require a PLB distress beacon and waterproof VHF handheld radio with GPS to be packed inside the raft. In the shock of the moment, he forgot the PLB was in the raft. He found it nearly two hours later and turned it on. At that point it was his only distress beacon. Inside the GGR comms grab bag his spare satellite phone was damaged while boarding the raft. (His main sat phone stored at the chart table went down with the ship). Also, inside was the backup waterproof YB3 satellite tracker and texting unit.

GGR control on learning of the EPIRB Distress and noting ASTERIA’s onboard Tracker was no longer transmitting, assumed the boat had sunk and that Tapio was probably in the raft. GGR remotely activated the backup YB3 and noted it had been powered on by Tapio. This was exciting news. A message was sent “Are You OK?”

Tapio responded shortly after that he was in the raft, all well and Asteria had sunk! This then gave a second position of the raft that was linked to the GGR 24hr online tracking page for all to see. Using the same YB3 unit, Tapio was able to send and receive short messages from the raft, a great comfort for him as a survivor, his family and all his followers around the world. His rescue was a success.

I know from experience over the past 30 years that when all goes wrong you may not get your grab bag, so what’s in the raft is all you may have. I always pack a distress beacon in my rafts and now a VHF/GPS, so I made it mandatory for GGR too. I also lost a good friend deep in the Southern Ocean in the 1994 BOC challenge when his 48hr EPIRB battery ran out before the ship arrived. We now insist on the YB3 unit in the GGR comms grab bag which tracks every 15 minutes for months, including two-way texting. Tapio was happy to have both.

This incident will be the subject of a full GGR report in the weeks ahead, which will be published so all can learn from the experience.

It is a long-held tradition of the sea, that if a mariner is in Distress and declares a “Mayday”, all other mariners will use their best endeavours to immediately assist if they are safely able to do so. Such was the case for Abhilash Tomy (IND) on Bayanat and Kirsten Neuschäfer (RSA) on Minnehaha when asked by GGR control to assist in the rescue of fellow GGR entrant Tapio Lehtinen on ASTERIA. Both altered courses immediately and stopped racing on receiving the request. The rescue was successful.

To calculate time compensation for both sailors all the facts affecting both sailors were considered, focusing on the primary impacts of:

Abhilash acknowledged the rescue message at 0930 UTC and was subsequently released at 13:50 UTC, (4:20 hours). He confirmed he resumed racing at 1400 UTC (total 4:30 hours) and he also stayed on a higher course (80° approx.) for the duration of the rescue in case he may be needed. Engine: did not use the engine.

Kirsten acknowledged the rescue message at 1303UTC and called to confirm transfer to vessel at 0745+1 but stayed on scene until 1000 UTC before proceeding under reduced sails: total 22 hours. Engine hours: 2 beginning, 2 middle, 3 at the end for a total of 7 hours.

The following time compensation has been determined:

Abhilash and Kirsten both commented that it took some time to let the adrenaline go, and get back into racing mode. Abhilash remained on a more northerly course than normal for the duration of the rescue, asking to be updated on progress and Kirsten had steered Minnehaha all night and manoeuvred at close quarters to the vessel for Tapio’s transfer.

Latest news from Kirsten in her regular weekly safety call.

Elliott Smith (USA) turned around on the 22nd of November, shortly after going through the Cape Town Gate, for a bowsprit failure. Fellow entrant Jeremy Bagshaw (RSA) who lives in Simon’s Town suggested he moor on the Simon’s Town’s mooring buoy in False Bay, well sheltered from the strong forecast South Westerlies. Local sailors guided him in at dusk.

His bowsprit was broken on one side and bent on the other, with the bobstay being slightly bent in the process. The Notice of Race allows Entrants receive onsite technical advice but no physical assistance. Elliott welcomed the advice from local sailors and riggers on repairing and strengthening his bowsprit. Following three hectic days and after reviewing pictures, videos and listening to Elliott’s descriptions, the GGR organisers approved the repairs and Elliott set sail once again bound for Hobart.

I am not driven by an ego trip, nor do I want to continue at all cost, but I think the repaired bowsprit is stronger than it was in Les Sables d’Olonne.

We were able to monitor and assess Elliott’s bowsprit repairs thanks to photos and video supplied by Simon McDonnel from FBYC right up to sea trials. While not perfect, our opinion is that managed correctly by the skipper, the repaired bowsprit is not unsafe. He has addressed the compression issues and added extra security to stop it folding up again. The inner forestay supports the mast well and combined with running backstays secures the mast without consideration of the forestay when sailing with the staysail and reefed main. The furling genoa is being swapped for a smaller jib and the entire Southern Ocean legs can be sailed under staysail alone.

In 1968 Bernard Moitessier damaged his bowsprit and spent a few days in the same area effecting repairs before continuing on. Elliott made no landing and received no physical support, so remains in the GGR rankings. He is now on his way to Hobart.

Shortly after, Arnaud Gaist (FRA) called the GGR Control to explain mast and rigging issues, and that he can no longer sail to windward before it’s solved. He described a bending mast last week and that he worked on rig tensions to re-establish symmetry.

In his last call on Friday morning, he advised that his mast base was moving, that a lower shroud needed tightening and that the bobstay fitting supporting the bowsprit came under stress, indicating further issues in the symmetry and compression of the whole rig.

He is still 1000 miles away from Cape Town, but north of the usual high-pressure systems, therefore sailing upwind, facing the swell, which is putting extra pressure on the rig. He is struggling to make Cape Town and now has little chance of making the Hobart Gate which closes on January 31st 2023. He is currently sailing downwind and assessing options for repair at sea, or whether he should follow predominately easterly winds for repairs in Brazil.

Meanwhile, Guy Waites (UK), the last victim of hull invasion, has given up on trying to scrape the barnacles at sea as it is too dangerous with little effect. He explained in his last call that he made up his mind and will have to slip the boat in Cape Town.

Unusual Southern Indian Ocean conditions for the fleet so far

Simon Curwen (UK), Kirsten Neuschäfer (RSA), Abhilash Tomy (IND) and Michael Guggenberger (AUT) have all improved their personal best over a 24-hours distance last week, with Kirsten obliterating the record with 219 miles in a day, but it took quite a while to get there. In fact, the Atlantic conditions were not the ones the fleet expected, and the same applies to the Southern Indian Ocean.

This year, an unusual Antartic polar vortex is contributing to a weather anomaly which is pushing the usual strong westerly winds of the Roaring Forties further south than usual. Some high-pressure systems are also lower than normal, pushing the roaring forties toward the furious fifties.

This may slow progress toward Hobart as the fleet experiences more of a mixed bag of wind directions and strengths as Simon Curwen explains. The good news is that some of the intense low-pressure storms may also stay below their route to Hobart and later Cape Horn. Only time will tell, but sailing along the 40th parallel of latitude looks like a different ride this year.