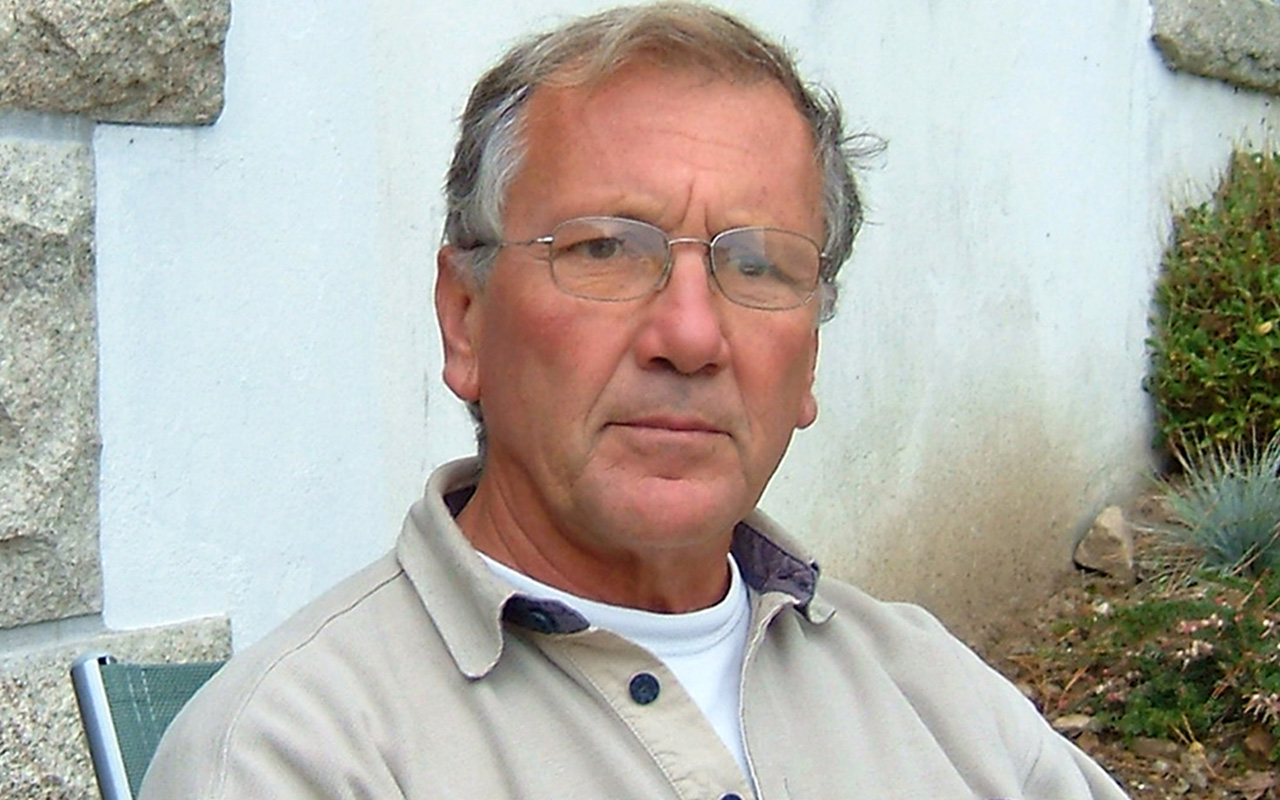 Don McIntyre, founder of the 2018 Golden Globe race, is proud to announce the appointment of Patrice Carpentier, the well-known French sailor, author and editor of Course au Large Magazine as Race Director

Patrice, who has been sailing since the age of 12, and is multilingual, brings a wealth of experience to this leadership role, having completed five circumnavigations. These include the first two Whitbread Round the World Races aboard Grand Louis and Gauloises 2, and two Vendée Globe solo non-stop races. He also finished 2nd overall in the 1991 Mini Transat despite suffering a broken mast during the first leg. He competed successfully with standard production yachts in two Route du Rhum races in 1982 and 1990 and was still winning in 2017 with victory in the 2-handed IRC/UNCL championship. All told, Patrice (67) has clocked up more than 300,000 sailing miles and crossed the Atlantic 35 times.

On the administrative side, he produces annual handbooks for the UNCL/IRC and Class 40 race circuits and another for the Société Nautique de La Trinité sur Mer, where he lives.

Patrice says of his appointment:

I find the Golden Globe Race extremely interesting because it takes the sport back to the roots of ocean adventure. I am honoured and excited to be helping to recreate history in this 50th anniversary race commemorating the very first solo non-stop circumnavigation won by Sir Robin Knox-Johnston back in 1968/9.

Patrice Carpentier’s appointment as Race Director now completes the core management team for the 2018 GGR, made up of:

With 4 months to the start of the 2018 Golden Globe Race from Les Sables d’Olonne, France on July 1, the number of entrants now stands at 20, representing 13 countries

These skippers have a remarkable range of backgrounds. Professional sailors and adventurers dominate, but they also include an engineer, foreign exchange trader, hydrographer, pilot, tailor and university lecturer. All have considerable short – and single-handed sailing experience, one having logged five solo circumnavigations. They hail from Australia (2), Estonia (1), Finland (1), France (4), Ireland (1), India (1), Italy (1), Netherlands (1), Norway (1), Palestine (1), Russia (1), UK (3), and the USA (2). Their average age is 47. The youngest, Britain’s Susie Goodall is 28; the oldest, French solo veteran Jean-Luc Van Den Heede is 72.

Three skippers have withdrawn: Gustavo Pacheco (58) from Brazil, American Roy Hubbard (28) and French veteran Patrick Phelipon (64). For Pacheco, retirement is a bitter disappointment. He had devoted the past two years to preparing his Lello 34 Double Helix in South Africa and had recently completed a proving trial across the Atlantic to Rio de Janeiro, but with no sign of sponsorship, he didn’t have the money to complete preparations as he wished. Hubbard, one of the youngest entrants, who recently competed on two legs of the Clipper Round the World Race to gain experience in the Southern Ocean, says that he has learned the need to extend his sailing resume before attempting a solo circumnavigation and has deferred his entry to the next GGR in 2022. He is now planning a voyage to Greenland and back aboard his Babe 35 Duke during the summer of 2019.

18 of the original 34 skippers to sign up for this 50th Anniversary Race have been forced by circumstances to either retire or defer their entry to the next GGR. We all knew from the outset that the hardest part of this challenge was simply getting to start line in a race-ready state. It is a measure of their professionalism and the strict safety measures prescribed within the race rules that none have felt pressured to press on against all the odds as Donald Crowhurst and others did in the first Sunday Times Golden Globe Race back in 1968. Those that remain have a very high chance of completing the Race, and those that have made the decision to abstain this time round, will be welcomed as entrants in the next GGR.

In transit to the start

Australian entrants Mark Sinclair and Kevin Farebrother are the first to ship their yachts to Europe for the start. Sinclair’s Lello 34 Coconut was lifted aboard the MSC Luisa in Adelaide on 27th January, and Farebrother’s Tradewind 35 Sagarmatha was loaded aboard the same ship when she docked in Perth. The ship is due to berth in London on March 8.

Displaying the friendly banter that exists between these two Manchester UK born competitors, Mark said: ‘Kevin has told me that Sagarmatha is positioned ahead of Coconut on the ship. He should make the most of it because this is the only time his yacht will lead mine!’.

Indian skipper Abhilash Tomy is also planning to ship his Suhaili replica yacht Thuriya from Mumbai to Europe in March and other competitors in the USA, Finland and Norway will be on the move as soon as the ice melts.

Turkish born British entrant Ertan Beskardes is already on the move. Having refitted his Rustler 36 yacht Lazy Otter in Fertilia Marina, Sardinia over the winter, he is currently completing his 2,000 mile solo trial voyage enroute to Falmouth.

The first port of call for all 20 entrants is Falmouth UK between 11-14th June for the Suhaili 50 Falmouth Parade of Sail celebrating the 50th anniversary of Sir Robin Knox-Johnston’s departure from there back in 1968 at the start of the original Sunday Times Golden Globe Race.

The SITRaN Challenge Race from Falmouth to Les Sables d’Olonne starts immediately after the Parade of Sail on June 14.

Plans for the Race Village are well advanced and the GGR Race HQ will open in Les Sables d’Olonne on May 7. The Race yachts will be berthed in the central marina and open for public display for two weeks from June 16 when the Race Village opens, until the start on Sunday July 1.

The two week build-up to the Race start will be packed with activities and displays that will carry visitors back in time to that golden age of sailing when sailors relied simply on the wind and their wits, navigating by sextant and paper charts without any outside assistance, GPS and other electronic or digital aids.

Also planned is a film festival celebrating the sea and man’s pioneering spirit, presentations by some of the world’s biggest sailing names, including Sir Robin Knox-Johnston, and a full entertainment programme on the main stage each evening

There are plenty of opportunities to watch the start of the GGR from the harbour wall and promontories around Les Sables d’Olonne, as well as at sea. Once the fleet has sailed over the horizon, the yachts will be tracked 24/7 with regular updates on individual positions within the fleet, coupled with wind and weather conditions viewed here on the web site.

In addition, skippers have the ability to send short text updates every 6 hours, which will be posted directly on the web site. Live video updates of radio interviews with the skippers speaking to Race Control will published on Facebook, together with a weekly video roundup.

In addition, the public can join the race by entering the Sail Online GGR Virtual Race. Each entrant is allocated an identical boat with similar performance polars to the real yachts, but unlike the GGR skippers, virtual competitors have the benefit of real-time weather information which is released into the race model at 10 minute intervals, producing an ever changing wind and wave situation that makes the virtual game as close to reality as possible. And adding further realism to the experience, the live online tracker information from the real yachts can be overlaid on the virtual course allowing virtual sailors to compare their navigation efforts against those competing in the GGR.

The Sailonline Virtual Race will commence at the same time as the GGR on July 1st and will be split into two natural legs from Les Sables d’Olonne to Hobart, and from Storm Bay, where the GGR skippers must stop for at least 90 minutes, back to the French finish line. For further information go to www.sailonline.org.

Storm Bay, Tasmania is the middle ‘gate’ that all GGR yachts must pass through, where skippers will hand over film, logs, tape recordings and letters. The Race Rules forbid any outside assistance, so no one can board the boats or hand across spare parts, but family and media will get an opportunity to provide moral support and interview each skipper as they pass through. The Hobart Gate will be assisted by The Royal Yacht Club Tasmania, while the outward Canaries Gate set off Lanzarote is supported by Rubicon Marina. The Falklands Yacht Club will assist at the final Gate after rounding Cape Horn.

The leaders are expected to complete the 30,000 mile solo circumnavigation in around 240 days.

The latest sponsor to nail their sponsorship colours to the Golden Globe Race masthead is RALF TECH watches, the official timing sponsor for the Race, which is offering one of its traditional self-winding chronographs to each competitor.

Accurate timing is an essential component of astro navigation, which all competitors will use to plot their positions around the world – just as Robin Knox-Johnston and Bernard Moitessier did 50 years before. In this return to the ‘Golden Age of Sailing’, modern electronic and digital technology is barred, the general rule being: If it wasn’t available to Knox-Johnston in 1968/9, it isn’t available to 2018 GGR skippers either. ‘It’s this return to basics that skippers and the public find so appealing’, says Race Founder Don McIntyre, adding: ‘There had been pressure for yachts to carry video transmitting equipment, but a poll amongst skippers was unanimously against the idea’.

Other sponsors to have aligned their brands to competing yachts include DHL Express, PRB, Matmut Insurance Group, Fugro, Altia, and Métier Intérim.

With four months to the start, attractive commercial opportunities remain for corporate sponsors to take full advantage of the 1 million + visitors expected to visit in Les Sables d’Olonne for the start and €120 million projected media coverage and social media exposure as the race unfolds over the next 12 months. For a sponsorship prospectus pack, contact:

Sir Robin Knox-Johnston, winner of the 1968/9 Sunday Times Golden Globe Race, shared the Red Carpet with Colin Firth and Rachel Weisz at the world premier of the film MERCY on February 9.

Sir Robin says of this portrayal of the Crowhurst tragedy set during the 1968/9: ‘I was blown over by the film. I know I knew the story inside out, but the way they had written up the drama, whilst keeping to the facts was really good and the acting was brilliant. Yes the story is inevitably sad, but I thought the producers handled it very well and were sympathetic to the Crowhurst family’.

Later, Sir Robin had the opportunity to sit round a table with The Mercy Director James Marsh, Colin Firth and Rachel Weisz to discuss the film and the original Sunday Times Golden Globe Race.