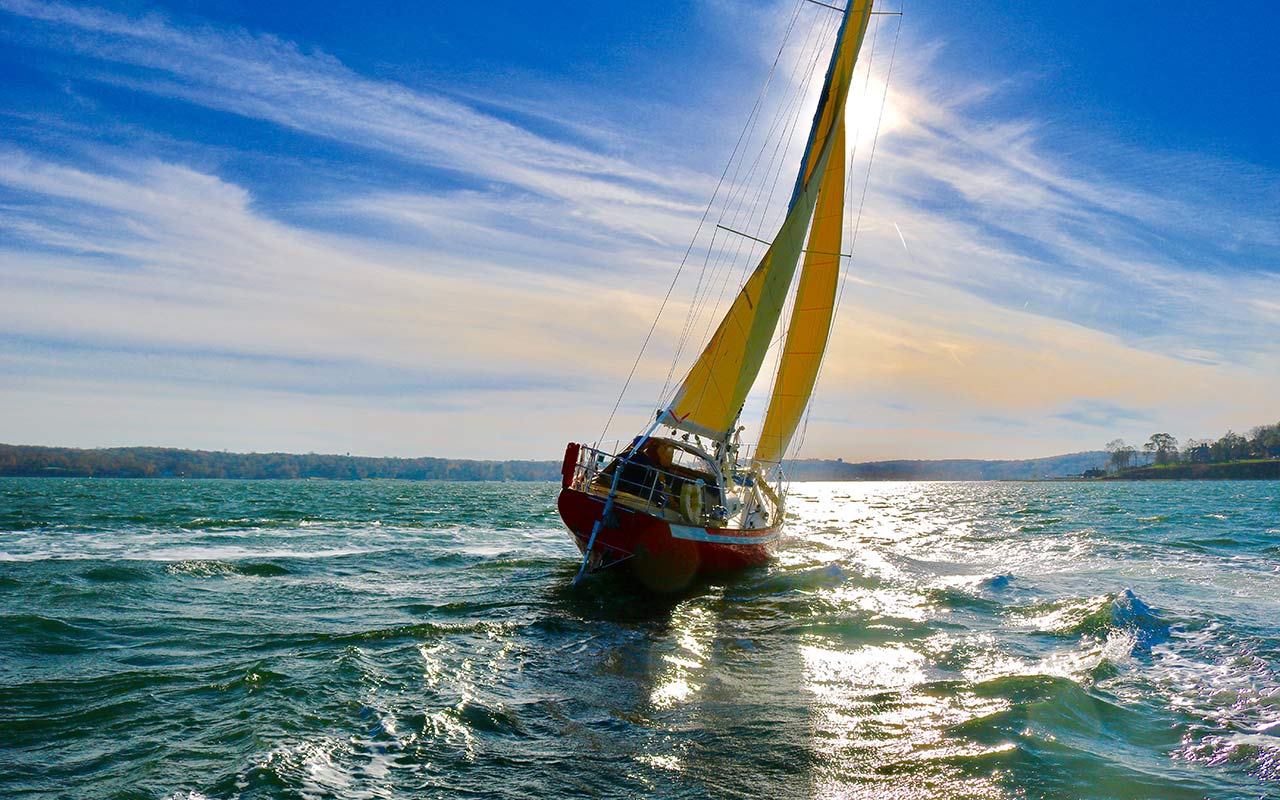 With just weeks to the start, entrants face real challenges everyday pushing to the start line while new sailors continue to be inspired planning for the GGR 2022. Boats are now arriving for final sailing preparations.

The GGR has been inspiring sailors since 1968 and its all starting again. I see it in many places. The passionate commitment of our entrants is impacting followers around the Globe. Millions have been exposed to Abhilash Tomy in India. The numbers are staggering. His beautiful SUHAILI replica is on a ship headed to the UK. Mark Sinclair and Kevin Farebrother have both shipped their boats to Europe, at about Euro $40,000 each. Not much for some maybe? but a HUGE commitment on top of everything else to make your dream happen, like Kevin selling his house! Many of the back stories to the struggle of ordinary sailors getting to the start are yet to be told. I know some and they are inspiring, exciting, sad and unreal! The Human side of the GGR is about to hit home in a few weeks when we are all together in Falmouth as the GGR family. Yes a real family, as it is also that kind of race, with a deep sense of a shared adventure about to happen. An adventure not without risk, but one that is achievable.

It will also be an incredible honour and privilege for us all, to relive the history of that day on June 14th with Sir Robin Knox-Johnston. In some ways it will be surreal. Black and white history being relived present day in full colour, with passion. For me personally I will be forever grateful for Sir Robin’s friendship, support and advice over the past 36 years and his huge moral and actual support for the 2018 Golden Globe Race from the very beginning!

An important concept when conceiving the 2018 Golden Globe Race was to let any sailor, anywhere in the world, Race solo around the Globe in a grand adventure re-living history. All this without needing huge amounts of money. Some commentators suggest that this is now not the case. They say you will need huge amounts to enter the GGR in 2022, with existing entries having spent in excess of Euro$160,000 on refits after having spent considerable money buying an old boat! All this before entry fees and safety gear. I can confirm that is the case for some entrants, but it does not have to be.

A few entrants have high paying jobs earning considerable income or have secured sponsors. They are happy to pay multiple professional shipwrights to work on their yachts full time or engage specialists. If you are paying Euro$50 an hour for four guys at 40 hours a week that is nearly EURO$32,000 a month. To strip a hull and rebuild to new adds up to many months, plus a new Rig, brand name sails and Bingo you need money and lots of it!. If you have a dream and have friends to help, have time on your side and choose the right boat in sound condition, that only needs serious servicing and strengthening and are happy with high quality Lee sails from Hong Kong, you are in for less, a lot less! I have seen many examples of good GRR approved designs that could be bought and refitted for under Euro $75,000 or much less. This does not include all the Race Safety Gear. It may not be a Rustler 36, but they are capable boats! You need about a year off work to prepare, but remember you work to live, not live to work. Much more fun working on a boat!

Then there is the entry fee of approx. Euro $9500 and all entrants need to attend at least one compulsory conference in France. Add some travelling cost and call it a holiday! Meeting up with all the other GGR family is stimulating, inspirational and great fun!

That’ it! $75,000 + $20,000 + $9500 , total EURO$104,500 ! Yes still a lot of money for some, but a whole lot of adventure as well! This is not even the cost of a mainsail for other around the world racing yachts. So it is all relative. The original goal of the Golden Globe Race is maintained for those who want it. When it’s all done, if you have not fallen in love with your perfectly awesome ocean voyaging home and love her forever, you can sell her and should recover about Euro$60,000, as is! Your life time adventure has cost about Euro $45,000 and two years or so of your life. It is up to you, but don’t ever say you cannot afford it. Maybe you just don’t want to do it! Or do you? 2022 is just around the corner.

We are now 19 entrants just weeks out from the start and everyone is asking, ‘How many will cross the start line?’. Our latest retirement Carl Huber was trapped in the Time versus Money cycle and bitterly disappointed to be so close, yet unable to meet the final deadlines organisers impose on all entrants. It was sad to lose such a colourful and fun character from the GGR Family. WE have always maintained the principle of a quality fleet, well prepared, with experienced sailors over anything else. Our Notice of Race is now recognised by the French Maritime Administration as one of the best they have EVER seen in any sailing event. Yes, even after all the criticism we received from the FFV in France, they are completely satisfied with our safety and security arrangements and praised us for that.

The atmosphere in Les Sables d’Olonne amongst locals and veteran sailors is growing in pride every day. I sense a feeling of ownership on their part which is fantastic. They understand our budgets are tiny compared to the other major races. The number of volunteers lining up to help in the Race Village and office is amazing. We are grateful and happy to hear from more! WE have secured nearly 25 volunteer support and security boats for start day, that maritime officials tell us will be bigger on the water than the Vendee Globe start. It is summer holidays!

So how many solo sailors will pass down the famous Les Sables river with thousands of spectators cheering them on and out to the open ocean setting off on a nine-month adventure? I honestly have no idea, but what I can say when we conceived of the race back in 2014, was a hope that we had at least 10 and absolute max of 20! We are doing OK. For the answer you will have to watch the live broadcast of the 1300hrs start on France 3 TV and Facebook 1st July. In a few weeks many will be asking, ‘How many will cross the finish line?’.

Not exactly a French term, YUM lacks a sense of style and grace that always accompanies French food. The humble paper bag never looked so good as when wrapping a crusty baguette. Setting off around the world from France has some real advantages compared to the UK. When talking to Philippe Peche and Jean Luc VDH it is easy to see why. These two experienced sailors understand the importance of food during a long voyage like the GGR. There is only one company in France able to make and supply food to the space program. Jean luc has them supplying him lightweight tins of beef cheek, rabbit and other delicacies. He also has over 400 TV dinners from the supermarket. I am not talking American TV dinners, but the French version that look and are great! Normally microwaved yet easily boiled, he plans on two a day! Philippe is bringing along a large number of glass jars, the type you only find in French shops full of the best food, just like your mum used to make! Susie Goodall on the other hand managed to salvage 300 tins of lentils from the DHL London boat show GGR display and intends to eat every one on the way around. Nabil Amra bought a drying machine. Friends now invite him to dinner with extra servings to take home and dry! He has enough for about three months so far. Francesco Cappelietti, being a vegetarian is planning on taking at least four food magazines, crammed full of pictures of leafy green salads, ripe tomatoes and fresh fruit. It is going to be a long journey that is certain, but nothing like 216 tins of corned beef and 144 tins of stewing steak all topped off with 216 tins of condensed milk that was Sir Robin’s UK departure just 50 years ago!

Scheduled for a start end of this year the Barcelona World Race, a significant two handed around the world event on the IMOCA world champion circuit was cancelled a few days ago, due to lack of sponsorship and political issues. I received this message from a fan a few days ago: ‘For many of us the GGR is so much closer to who we think we are, or what we dream of doing than the billion-dollar campaigns we see all over the media‘.

Certainly, this is our place in sailing and adventure. The GGR is completely unique in every dimension from what has gone before. We are not the Vendee Globe, the Volvo, the Clipper or the Ultim. We are probably the longest individual sporting competition in the world. The world is about to realise that. The GGR has no equal in any adventure. Maybe that is why we still have no sponsor? Sad indeed and certainly the GGR is feeling the pressure of No major partners for whatever reason. We have reduced budgets considerably and that increases the work load for our management team. It has NOT affected the planned coverage for followers of the Race to keep up with events for nine months. It also increases our gratitude to Les Sables D’Olonne Agglomeration as our generous Host Port and Regional Partner for having strong faith and passion for the Race. It’s future is assured. Official Timer Ralf-Tech watches and Hydrovane Windvanes are our real friends. The growing list of volunteers and you our followers are fantastic, so thanks for supporting us. Spread the word and help us make the 2018 Golden Globe as big and bold as it will be.

In a few weeks something quite special will happen! WOW!