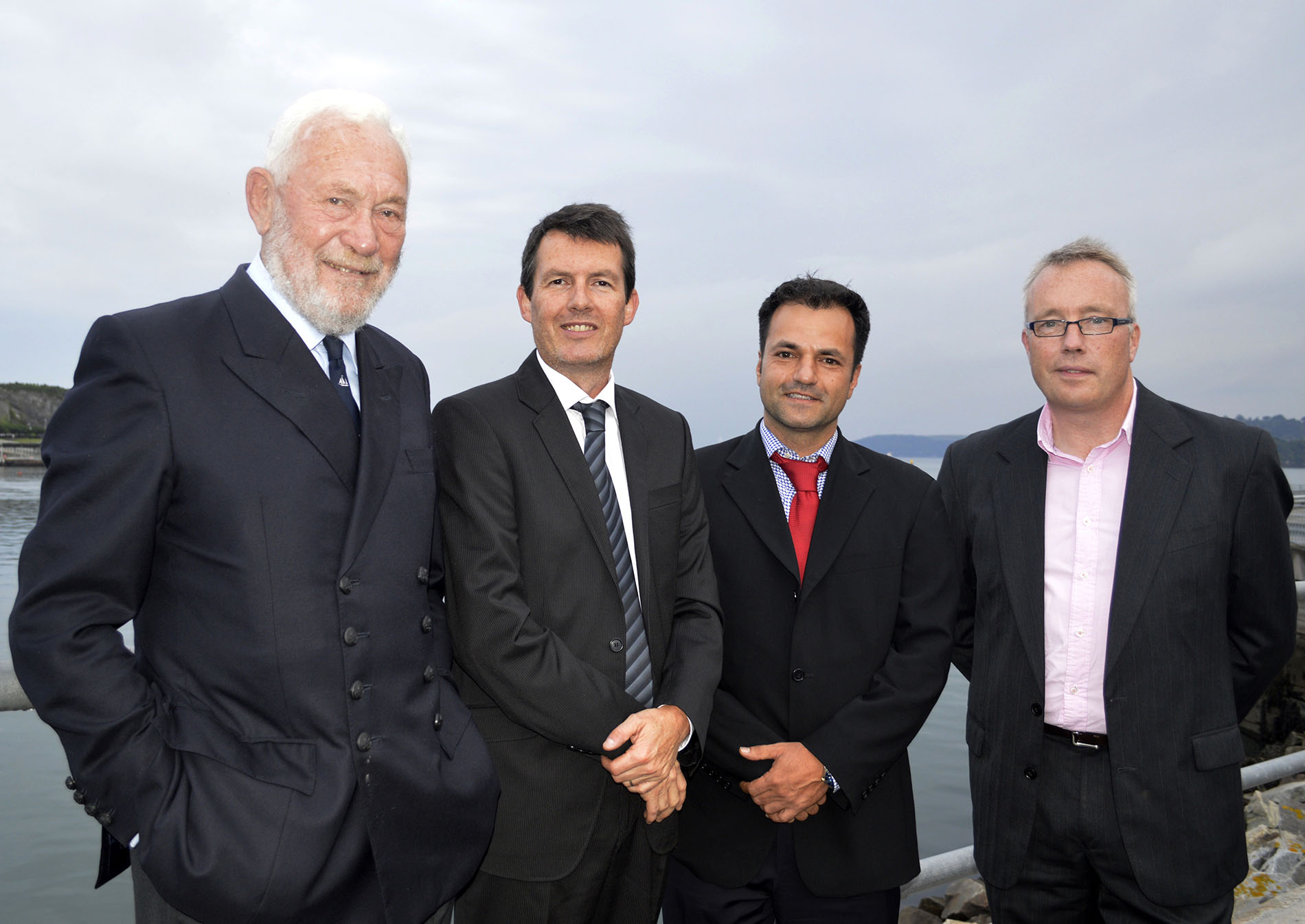 They will be among a fleet of 30 international yachtsmen and women, all sailing long-keeled traditional yachts who will set out on 16th June 2018, 50 years after Sir Robin started from Falmouth in 1968. He returned 312 days later as the sole finisher in the original Sunday Times Golden Globe Race.

Antoine Cousot (45) is a French professional sailor from Noirmoutier, France, married with three children who has sailed the equivalent of 3 circumnavigations delivering sailing boats and skippering large luxury yachts to all corners of the Globe.

Nabil Amra (41) is a foreign exchange trader based in Minneapolis, Minnesota, who has sailed throughout the Caribbean and Great Lakes. He has been working diligently on his seamanship skills and feels ready to give a strong account of the tenacity and resoluteness of a Palestinian at sea.

This retro race is limited to production yachts between 32 and 36ft long, designed prior to 1988 with traditional long keels and stern hung rudders. The BISCAY 36 fits the bill perfectly. Designed by Alan Hill as a sturdy ocean cruising yacht back in 1973, 29 of these classic yachts were built by the Falmouth Boat Construction Company in Flushing.

Ironically, Cousot has bought VISCAYA, the first of these production yachts, launched in 1975, and Amra has ELE MAY, the last to be built back in 1990. Both sailors have brought their yachts back to the Falmouth Boat Company in Flushing, now headed by Jonathan Fielding, to have them extensively refitted for the marathon ahead.

About Falmouth Boat Co.
This is a full service boatyard with a reputation for excellent boat care and attention to detail. It works in Little Falmouth Yacht Yard, which spans five consecutive centuries of shipwright expertise. The yard has a significant pedigree in boats, having seen the build and repair of hundreds of vessels, including the Cutty Sark

This yard has a natural affinity with the Golden Globe Race since it saw the build of several boats for the original event in 1968, and hosted Sir Robin Knox-Johnston’s yacht SUHAILI on his return to Falmouth in 1969. We’re delighted that so many entrants have commissioned us to prepare their boats for this special race. With the boatyard steeped in so much history, it seems only right.

Cutty Sark
At the turn of the twentieth century, the yard hosted ‘RS Burt & Son, ship, yacht, launch and boat builders, smiths and motor engineers, marine surveyors and valuers, contractors to the Admiralty, War Office, RAF’. They built, repaired and rigged a large variety of boats. In 1883 Burt launched the 103ft steam tug Armine, and in 1923 the yard workers re-rigged the clipper ship Cutty Sark, a resident vessel in Falmouth at the time.

Over the years, the yard built many traditional wooden craft such as oyster boats, quay punts, working boats and custom-built yachts. During the war the boatyard built motor torpedo boats (MTBs), many of which left Flushing directly to raid on St. Nazaire.

Taifun went on to star in the 1955 film ‘The Ship that Died of Shame,’ taken from a Nicholas Monsarrat book. The film starred George Baker, Richard Attenborough, Bill Owen and Virginia McKenna. She was then bought by Hugh Edwards (the brother of the comedian Jimmy Edwards.) She motored to Tangiers and was subsequently ‘lost’ in ‘suspicious circumstances’ in the Mediterranean.

Today boat owners benefit from Falmouth Boat Co.’s large slipway that can handle vessels up to 100 feet and weighing 100 tonnes. Falmouth Boat Co.’s first class expertise and comprehensive skill-set ensure that boats are repaired, restored and refurbished to the highest standard, on time and on budget.

Loïc Lepage from France steps up to the plate

Loïc Lepage (59) from France has been promoted from the wait-list, taking the place of Fabrizio Ladi Bucciolini from Italy who withdrew from the GGR last week after suffering recurring back problems during a 3,500 mile trial sail. Lepage has a Nicholson 32 Mk X yacht named LAALAND and is planning to start her refit in early 2017 prior to making a solo voyage to the Azores and back.

Loïc has more than 20,000 miles of solo sailing under his belt including three trans-Biscay and four transatlantic crossings.

The 2016 GGR Skipper/Press Conference will be held in Paris on Monday and Tuesday 5/6th December to coincide with the Paris Boat Show. Race founder Don McIntyre says:

With French skippers dominating the entry list, we thought it appropriate to hold this year’s Conference during the Paris Show. This will be 18 months from the race start from Falmouth on June 16, 2018 and there will be a lot that skippers will want to discuss and confirm. We are expecting a high turnout.