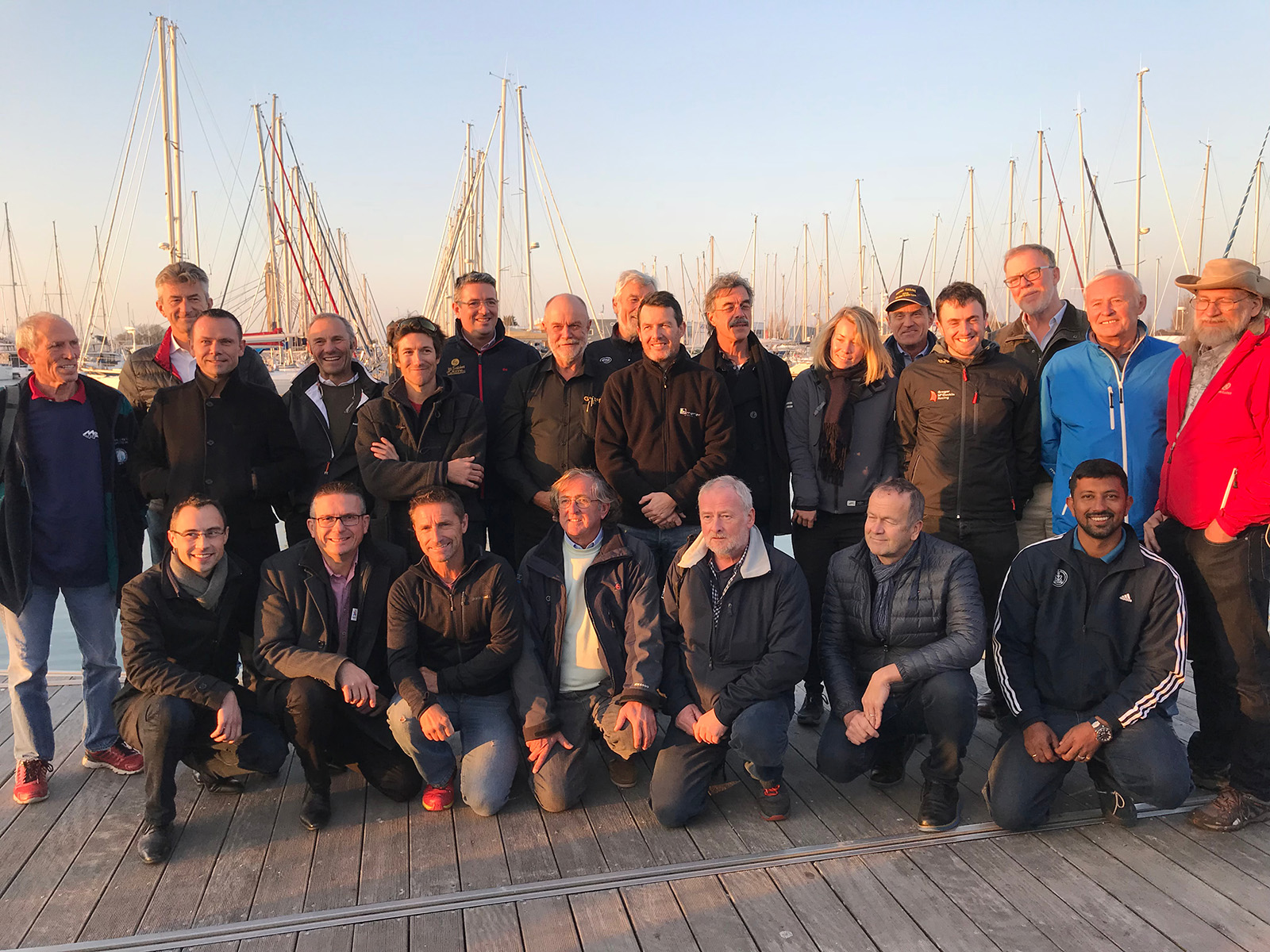 The event marks the 50th anniversary of the Sunday Times Golden Globe solo non-stop round the world Race in 1968/9 when rules then allowed competitors to start from ports in northern France or UK between June 1st and October 31st. Nine started including Frenchmen Bernard Moitessier and Loïc Fourgeron. But there was only one finisher – Robin Knox-Johnston and his yacht Suhaili. Moitessier, sailing the larger and faster Joshua might have won (he rounded Cape Horn 17 days behind Suhaili) but instead of chasing Knox-Johnston back up the Atlantic, Moitessier turned east to start a second circumnavigation – ‘To save my soul’ as he put it.

With 6 months to go before the start, five French skippers continue to dominate the entry list. Two new skippers have announced their entry and the return of another who had previously retired, replace five entrants that have withdrawn from the race.

The new faces are Ertan Beskardes, a Turkish born British national who has bought a Rustler 36, Commander Abhilash Tomy, KC (38) from India who has built a Suhaili replica, and Tapio Lehtinen (59) from Finland who is campaigning a Sparkman & Stephens designed Benello Gaia 36.  The entry list also shows a welcome return of Italian entrant Francesco Cappelletti with his Endurance 35.

Those to have withdrawn for personal or financial reasons are Izabel Pimentel from Brazil, British farmer Ian Reid, and two Frenchman, Lionel Regnier who is now assisting fellow Frenchman Jean-Luc van den Heede, and Arsène Ledertheil, together with Swiss entrant Nérée Cornuz.Australian boatbuilder Mike Smith simply ran out of time building his replica of Sir Robin Knox-Johnston’s 1968/9 winning yacht Suhaili and has now set his sights on entering the next GGR in 2022.

The closer to the start, the more the financial and personal pressures mount, and it was inevitable that some entrants would drop out. That leaves 23 strong entries all busy preparing their boats for the start in Les Sables d’Olonne on July 1st next year. It also leaves 7 places up for grabs and it so happens that we have that number talking to us about the possibilities of becoming late entrants in the Race. Given that there is just 6 months left, that will be a tall order for some who have to buy a boat and refit it, then complete their 2,000-mile proving voyage. Time will tell how many of these will make it to the start.

Skippers are barred from carrying any electronics and must navigate using sextant, paper charts and a wind-up chronometer, so the link with RALF TECH as official timing sponsor is an important one for both the entrants and accuracy of the event.

The GGR programme starts, with the 2018 Golden Globe fleet congregating in Falmouth UK between 11-14th June to celebrate the 50th anniversary of Sir Robin Knox-Johnston’s start in that race from the Cornish port back in 1968. The GGR fleet will join hundreds of other yachts expected from France and UK in Falmouth Harbour with a sail-past salute to Sir Robin. Other historic yachts joining the commemoration include Joshua, Sir Francis Chichester’s famous Gipsy Moth IV (the first to complete a solo one-stop circumnavigation in 1966/7 which led to the Sunday Times race, and Sir Alec Rose’s Lively Lady, which followed Chichester’s route in 1967/8 14th June: SITraN Challenge charity race to Les Sables d’Olonne.

Immediately after the Parade of Sail, the thousands of onlookers expected in Falmouth for this celebration will be treated to seeing the Golden Globe Race fleet line up to race against each other for the first time in the SITraN Challenge charity race from Falmouth to Les Sables d’Olonne. SITraN (Sheffield Institute for Translational Neuroscience) is the nominated charity for the GGR and one of the world leading centres for research into Motor Neurone Disease, Alzheimer’s and Parkinson’s Disease. See www.Sitran.org.

Falmouth looks forward to recognising Sir Robin Knox-Johnston’s significant achievement 50 years ago, in partnership with the Royal Cornwall Yacht Club, St Mawes Sailing Club and the Golden Globe Race. The Suhaili 50 Falmouth Parade of Sail promises to be a great 3-day festival both on and off the water.

The GGR fleet will arrive in Les Sables d’Olonne at the finish of the SITraN Challenge charity race from Falmouth on Saturday 16th June when the GGR Race Village will open to the public through to the Race start on Sunday July 1st. There will be a range of activities and entertainment as well as access to the pontoons throughout the race village opening times.

I am pleased to welcome 14 of the 23 Golden Globe Race skippers ahead of Salon Nautic for their first meeting her and to meet with the press. 12 out of 14 of the nationalities are represented here and is a demonstration of the international scope of the event. These 2 days spent on the coast mark the introduction to the Sables before the big start. This is the only opportunity to have almost all gathered at Les Sables d’Olonne before June 16 and the start on July 1st.

Significantly, the 2018 Golden Globe Race will start from a line marked by the historic GGR yachts Suhaili and Joshua with Sir Robin Knox-Johnston firing a canon from Suhaili’s foredeck. The start is expected to attract thousands of well-wishers lining the harbour wall and beach front, with many more afloat cheering the sailors off from ferries and private boats. Yannick Moreau added:

There is massive interest in Les Sables for offshore racing and the local community will come out in droves to cheer on these sailors as they set off down the canal for the adventure of a lifetime.