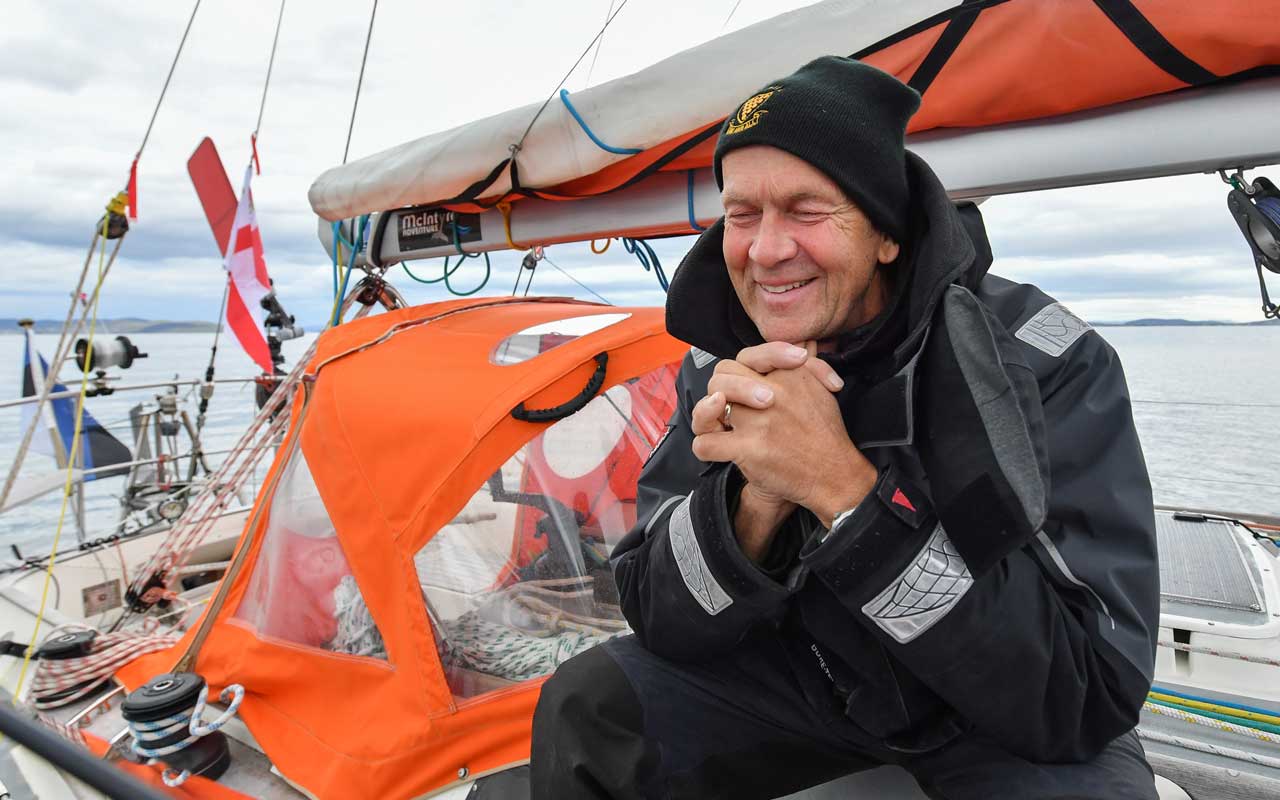 The winds have now receded but the leftover Atlantic swell remains as his Rustler 36 One and All heads into the Bay of Biscay today. With 300 miles to go, Race HQ is now predicting a 09:00 UTC finish off Les Sables d’Olonne on Sunday March 10.

For this 56 year-old solo circumnavigator, his homecoming could not come soon enough. He is out of food, and has not seen his wife and very young children for more than 8 months. It will be a warm embrace followed by a dash to get his first square meal since rounding Cape Horn on January 19. He joked with race organisers yesterday: ‘My boat is for sale. Any reasonable offer, but without food’.

He is promised a strong welcome in Les Sables d’Olonne led by the first two finishers Jean-Luc Van Den Heede and Mark Slats who are both making an overnight dash back to be first to shake his hand on the dock. Jean-Luc is returning from the Sail-In festival in Bilbao where the Frenchman will receive their top sailing award on Saturday, while Mark will drive through the night straight from his final public presentation at the HISWA Amsterdam Boat Show.

For regular updates and a live video feed of Uku‘s arrival and press conference, go to www.facebook.com/goldengloberace/

Meanwhile, 4th placed American/Hungarian Istvan Kopar appears to have finally escaped the clutches of the Azores High pressure system, and now within 1,350 miles of the Les Sables finish line, is making great strides towards completing his solo circumnavigation around 18-19 March.

Finland’s Tapio Lehtinen is having less luck. Faced with head winds for the past few days in a boat covered in barnacles which has lost its ability to point high into the breeze, Tapio is currently heading southeast, 90° from where he wants to go to escape the adverse current running down the South American coast. He is not expected to finish until May.

Second placed GGR finisher Mark Slats and his Rustler 36 Ohpen Maverick are the stars of the show at this week’s HISWA exhibition in Amsterdam. The yacht is on display and open to the public in Hall 1 until Sunday. Mark and designer Dick Koopmans, who led Mark’s preparations for the Race, will be giving talks on the main stage on Friday and Saturday. Mark will also be signing his new autobiography ‘Held Op Zee’ (Hero at Sea) on Friday. The book includes a full account of his adventures during the Golden Globe Race.

There will also be opportunities to sail aboard Bernard Moitessier’s famous 1968/9 Golden Globe Race yacht Joshua throughout the weekend from Port Olona on 20/21/22 April, organized by the Friends of the Maritime Museum of La Rochelle.