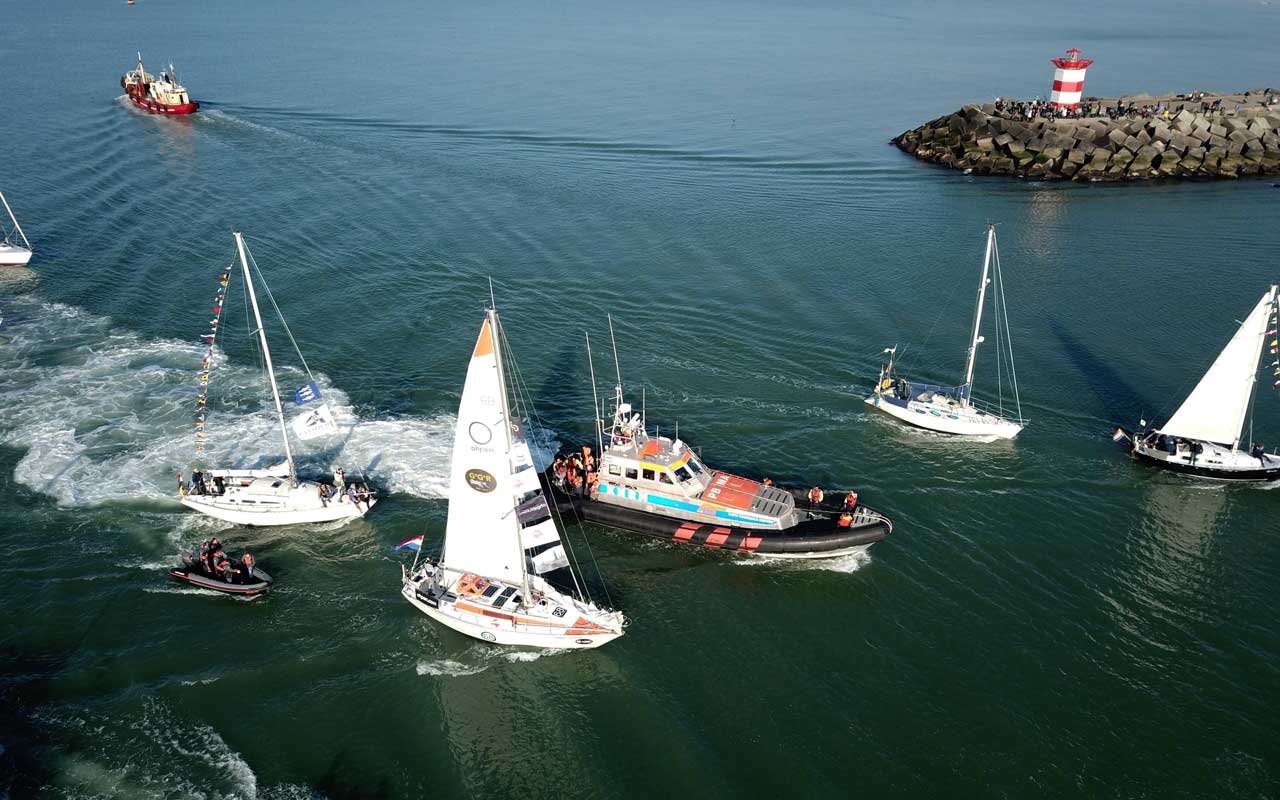 Third placed Estonian sailor Uku Randmaa is hungry. Hungry because he has caught no fish during the past week to supplement the last of his food stocks. Hungry to finish…and hungry to see his young family after more than 8 months alone at sea.

Like a camel sensing water, he and his Rustler 36 One and All have put on a spurt over the past 7 days, more than doubling his lead over 4th placed American/Hungarian Istvan Kopar. He needs to because the 55-year old solo circumnavigator told Race organisers this week that he has lost more than 20kg during the voyage so far, and if he can’t catch fish, there is little left onboard to sustain him over the next two weeks.

Now within 100 miles of Santa Maria, the southern most island in the Azores, Randmaa has cleared the Azores high-pressure system that has trapped Kopar’s Tradewind 35 Puffin, and can expect stable south westerly Trade winds to carry him all the way to Cape Finisterre. The Bay of Biscay may well hold a few Springtime surprises, but he is now expecting to reach the Les Sables d’Olonne finish line sometime between 11-12th March.

The good news from Istvan Kopar is that the his self-made emergency tiller he fitted on Puffin two weeks ago is standing up well. The bad news is that he is about to stall in the transition zone between the North East and South West Trade winds, and could be stuck there for several days. Now 2,130 miles from the finish, he is not expected to get there before March 21.

Finland’s Tapio Lehtinen is not even thinking about the finish. Still more than 5,100 miles from Les Sables d’Olonne, he’s busy simply enjoying his own environment and wildlife too much. The goose barnacle infestation that is slowing his Gaia 36 Asteria to a leisurely walking pace half way up the South Atlantic is providing him with a bonus time at sea. Today, the GGR tracker is suggesting a May 1 finish ETA, but as the barnacles grow and slow his progress further, race organisers suspect it could be June before he sees the sands of Les Sables. Then, restaurateurs will be queuing up to harvest the crop. Goose barnacles it seems – large ones especially – are quite a delicacy!

Mark Slats receives a hero’s welcome in the Netherlands

After a leisurely cruise, taking in dinner dates with Susie Goodall in Falmouth, Ertan Beskardes in Poole and Sir Robin Knox-Johnston and his Clipper Race skippers in Gosport, 2nd placed Dutch skipper Mark Slats returned to his home port of Scheveningen and a hero’s welcome last Saturday.

A fleet of boats with friends, fans and media came out to escort him to Yacht club Scheveningen where he was was reunited with his Mom and Dad. Bruno Bruins, the Dutch Minister of Health and Sports was also there to welcome him and received the first copy of Mark’s book ‘Held op zee’ (Dutch for ‘Hero at sea’) about his adventurous life including his story of the Golden Globe Race.

Hundreds of people gathered on the dock including the many volunteers that supported him before and during the race, and made this welcome possible.

By Sunday, however, it was back to business. Having talked about plans for new adventures in the Scheveningen YC the night before, Mark was back in the gym, starting to train for his next challenge!”

An American philanthropist with a taste for Irish whiskey has stepped in to support the salvage operation to recover Gregor McGuckin’s yacht Hanley Energy Endurance drifting some 1,200 miles west of Perth, Australia. Speaking from Fremantle overnight, American tug boat skipper Cody Cordwainer, who is leading the salvage operation said:

Its taking longer than expected. The 60ft sloop we had planned to use has structural problems that are too expensive to repair, so we are back to square one looking for a suitable ocean-going boat.

The good news is that an American philanthropist has donated a large chunk of the salvage costs in exchange for the barrel of Glendalough 7 year old 777 single malt whiskey still onboard and the Distillery has agreed to this.

We have made a lot of contacts here and are looking at two avenues: Finding someone with an ocean-going boat having trouble meeting their monthly slip payments who could use the extra cash, or someone with a boat that they want to make ocean-going, and we can do that for them.

I’m certain this is going to happen. We are going to make it happen and I’m not going home until we do.

There will also be a photo opportunity with Bernard Moitessier’s famous 1968/9 Golden Globe Race yacht Joshua.