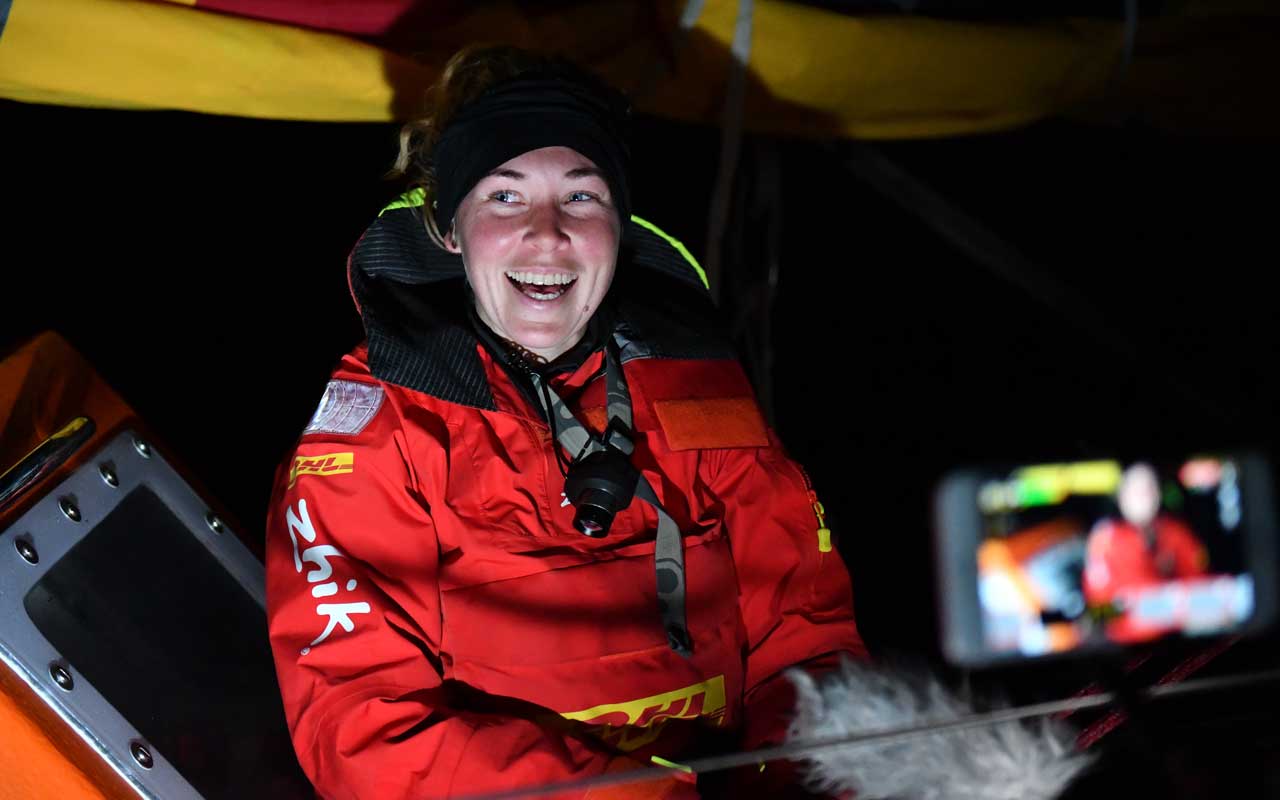 Looking fit and relaxed, she remained at anchor for 12 hours, using the opportunity to try and catch up on sleep before starting maintenance work on her boat at first light.

The barnacles were not nearly as bad as on Uku Randmaa’s boat One and All when the 3rd placed Estonian sailor passed through the BoatShed.com Hobart film drop last Friday. ‘I keep going into the water to scrub the bottom each time I am becalmed, so it shouldn’t be too bad.’ She explained before donning a wetsuit to dive on the hull. Two hours later, and at the cost of one scrubbing brush and snorkel, which had dropped to the bottom, Susieproclaimed the hull clean again.

Problems with her Monitor wind vane self-steering were thought to be more challenging, but after unbolting the system from the back of the boat, it took just 20 minutes to re-align the cogs so that it would self-steer the boat down wind again.

Recalling the adventure since starting this solo non-stop circumnavigation from Les Sables d’Olonne on July 1st, Goodall, the sole woman and youngest competitor in thise race, joked: ‘The Indian Ocean has just been awful. The Pacific will be all blue skies and 25knot winds behind me all the way to Cape Horn.’

It was the Southern Ocean storm experienced two weeks ago that remains most vivid.

That was brutal – It took me a week to recover! The seas were coming from four directions and I kept being knocked down. I was really struggling with the wind vane, which had been bent and would no longer steer downwind. I had to hand steer to keep the boat stern-to the waves, but even so, some waves would come and hit us side-on. Even after the big blow, I still got knocked down a couple more times by the confused swells.

Lessons were learned, and as a result of that experience in 70 knot winds and 15 metre seas, Susie has changed here storm tactics.

Every storm is different, and before this one, I used to deploy a drogue to slow the boat down. I don’t know why, but in that last storm, I simply towed warps and hand-steered to keep the boat stern-to and it seemed better. My tactic had been to let the boat sail though it, but that time I couldn’t.

Deprived of modern-day digital communications throughout this retro race, Susie did at least get the opportunity to chat live to her family back in the UK, thanks to one of her supporters holding up their iPad to provide a Facetime link home.

Thousands of well wishers also sent her messages of good luck and many questions, some of which were read out to her. ‘Harry’ sent a proposal of marriage. ‘Prince Harry?’ she enquired optimistically.

What have been the most challenging moment? Asked another. ‘Being becalmed’.

Is the ocean a friend or foe? ‘The ocean is a friend who turns on me now and again’.

What have been the best parts of the voyage so far? ‘There have been a lot of good parts – but passing the Cape of Good Hope was one highlight’.

What has been the most useful gadget onboard? ‘A portable cassette player’.

What do you miss most onboard? ‘Fresh food, my iPod and Kindle’.

How much water do you still have? ‘A month’s supply – not enough to get to Cape Horn. I hope it rains’.

What will be your first meal when you return to Les Sables d’Olonne? ‘A big salad, fruit, a bowl of steamed broccoli, a pizza – and a glass of red wine’.

Susie set sail again at 02:00 UTC to cross the Tasman and head out into the South Pacific bound for Cape Horn, knowing that another Southern Ocean storm is expected in two days.

Next arrivals in Hobart

The next arrivals at the BoatdShed.com Hobart film drop will be American/Hungarian Istvan Kopar on Saturday sailing his Tradewind 35 Puffin, followed by Finland’s Tapio Lehtinen and his Gaia 36 Asteria. Her engine has packed up and her hull is covered in barnacles, so sailing in to Storm Bay and picking up a mooring without any outside assistance could be challenging.

Meanwhile, concerns about Russian skipper Igor Zaretskiy back in 8th place, now trailing race leader Jean-Luc Van Den Heede by some 7,000 miles, have been allayed by his latest report since fixing a broken forestay aboard his Endurance 35 Esmeralda.

We are now totally up and running with Esmeralda. I have completed the repair to the stay. It took four days of contemplating and waiting for the weather. I spliced the eye on the forestay and secured it in the eyelet on the top of the mast.

I was lucky to have a bit of calm in the morning, took two reefs in the main, hoisted the storm jib and then hove to. I was working on it for more than four hours. In the end, it took 1½ hours to get back down from the mast. I have never ever got that tired in all my life. I slipped a dozen of times, hanging on the safety line. What can I say – these footholds on the mast, like stirrups, are not for this job. They are to break your ankle when you’re sent swinging around the mast. Much better to have a folding ladder. Tearing down all the flag halyards and one clutch on the way down was the high note that ended the job.

Gave it a try with the yankee set for 24 hours. The forestay holds well. Now heading back to the course line, I have got way too far north from it. Pulled down the mizzen because it headed the boat. Now I have the small jib and the storm jib up, and one reef in the main.

When I climbed the mast a huge whale surfaced right beside the boat. A beautiful creature.

Sorting out the provisions. Run out of sugar, but there are enough lollipops and green pea stocks to feed an army.

It’s a good day today. The sun is shining, the ocean is blue, and waves are about 2 metres.The cold front is passing by. I got so tired working on the mast, that I just crawled into the sleeping bag and could do nothing for three days afterwards – even down to holding a pencil. holding a cigarette involved both hands, and I felt I was one big bruise.”