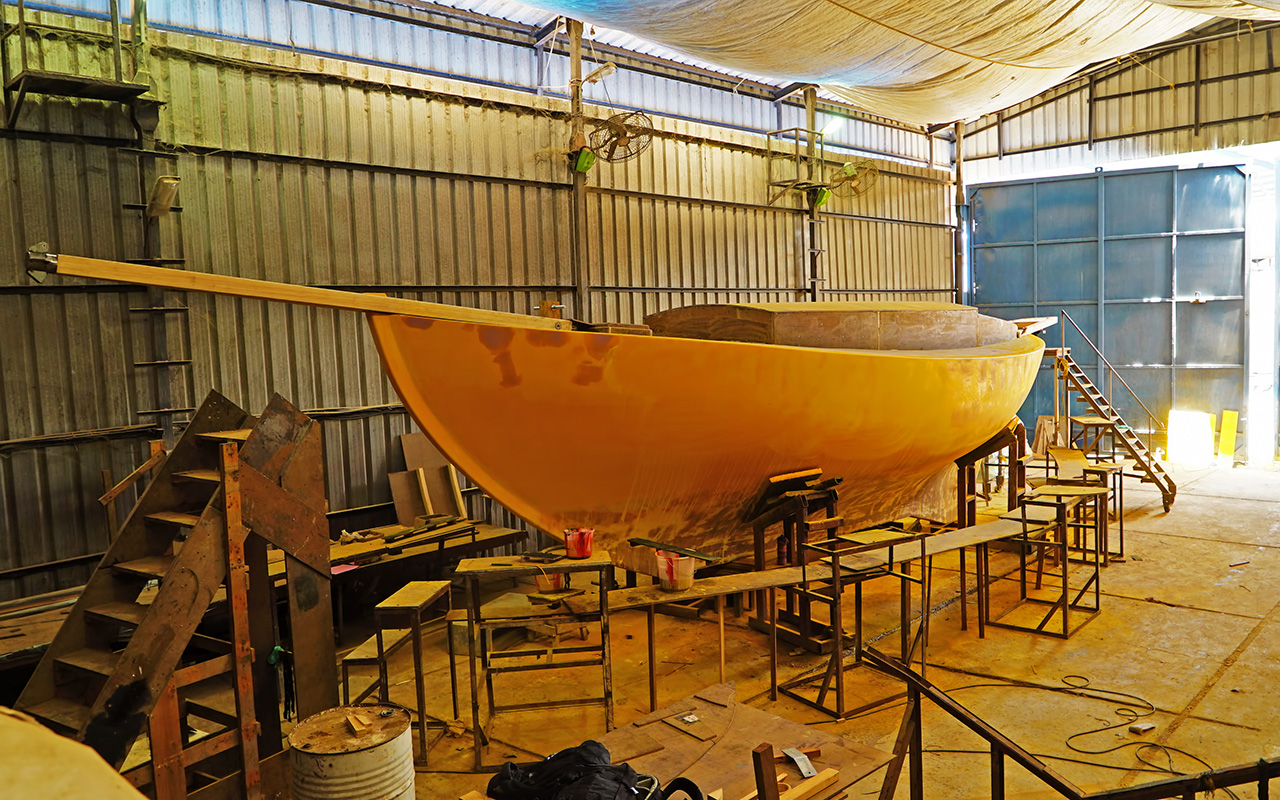 One year from today, up to 30 sailors will set out from Plymouth UK to recreate history at the start of a solo circumnavigation in small traditional long keeled yachts using just paper charts, a sextant and wind up chronometer to navigate by.

The race marks the 50th anniversary of the original Sunday Times Golden Globe Race and the remarkable achievement of Sir Robin Knox-Johnston in becoming the first man to complete a solo nonstop circumnavigation.

Fifty years on from the original race when only one of the nine starters managed to finish, the dramas being faced by competitors during their 2,000 mile proving trials show that the challenges remain just as great.

Six months after Australian entrant Shane Freeman was capsized and left dismasted 600 miles from Cape Horn, Frenchman Loïc Lepage lost his liferaft, when it exploded from its canister stowed on deck during his 2,000 mile proving trial. It was a heart-stopping moment, but after returning to France to replace the raft and review the position and fastenings, he has set out once more to sail solo to the Azores and back.

Freeman’s liferaft, stowed in a similar manner on deck, was also damaged, and the Australian also lost the use of his wind vane self steering when the line connected to a drogue became tangled round the blade.

Frenchman Lionel Regnier, who has made 23 previous transatlantic crossings and never retired from a race before, also suffered self-steering failure when racing his Rustler 36 One and All in this year’s windswept OSTAR transatlantic Race from Plymouth to Newport. The damage forced him into early retirement and long hours of hand-steering back to France. By all accounts, Lionel had a torrid time, and after a week of reflection has decided to retire from the GGR, sell his boat and devote his energies to supporting fellow Frenchman Jean-Luc Van Den Heede.

Then, just days ago, American based Palestinian entrant Nabil Amra told us of the trials he experienced aboard his Contessa 32 during a voyage out into the Atlantic to gain his 8,000 sea mile qualification.

It was a much rougher trip than I let on but it hasn’t shaken me off the GGR horse. I’m still in it. I had a Shane Freeman incident with the wind vane and my drogue… Then had to hand sail the last 550 miles with a sodden cabin and clothes, spoiled food, no heat or self steering gear. It was a real test of mental and physical endurance. I’m now working on having my phone and camera, destroyed by the conditions, salvaged to get the footage off them to make a short video of the voyage.

Amra’s choice of yacht for the Golden Globe Race, a Biscay 36, is currently being refitted at the Falmouth Boat Co in Cornwall and with this experience, he is likely to call for additional alterations.

And spare a thought for Nérée Cornuz, the 27 year old Swiss/Italian currently sailing his engineless Lello 34 solo from Cape Town has suffered broken rigging and problems with his home made windvane self steering enroute to the Mediterranean.

Don McIntyre, the race founder says of the dramas:

These events have been a wake-up call for competitors. The 2018 GGR is no more a walk in the park than the original event back in 1968. It will be a race of attrition testing even the fittest and best prepared. Wind vane self steering systems are much better than they were, but are still vulnerable to damage, and those who don’t carry spare parts are likely to be early casualties. Liferafts stowed on exposed parts of the deck have also proved at risk, and some skippers are now adapting cockpit lockers to protect them better and still have them ready for instant use. Skippers will now be re-looking at every part of their boats to reassess what parts could break and plan how to fix them when conditions are at their worst.

Today, one year before the start of the GGR, skippers must nominate the boats they will sail in. Just before deadline, British entrant Robin Davie, a veteran of two BOC Around Alone race campaigns, and Brazilian solo circumnavigator Izabel Pimentel have both bought Rustler 36 class yachts, raising the number of these Falmouth built boats to 6.

Britain’s Susie Goodall, who also has a Rustler 36, has just completed a double Atlantic crossing and is heading to Falmouth to have her refitted for the race.

Ireland’s Gregor McGuckin and Arsène Ledertheil from France have each bought Biscay 36 yachts, making this the second most popular class with 4 in the race.

Russia’s Igor Zaretskiy has selected the well found Bellure Endurance 35 for his voyage, joining Britain’s Ian Reid and Patrick Phelipon from France in a class of three.

Tapio Lehtinen (59) from Helsinki, Finland is a life long sailor who started in Optimist dinghies at the age of 6. Currently Commodore of the Helsingfors Segelsällskap (HSS) Yacht Club, his experience ranges from racing Lasers, 470s and 29ers to keel boat and ocean racing, including a three-decade-long racing career in his classic six metre May Be IV. He has competed in the 1981/2 Whitbread Round the World Race aboard Skopbank of Finland, the 1985 Two handed Round Britain and Ireland Race, the 2STAR transatlantic race 1986, the Azores and Back race in 1987 and the 2014 Bermuda Race.

Tapio will be campaigning a Benello Gaia 36, a forerunner to the first Sparkman & Stephens designed Nautor Swan 36, which he is currently sailing from the Mediterranean back to Finland to be refitted for the Race by the Nordic Refit Centre in Kolpi, Finland. Once this work has been completed in the Fall, Tapio plans to sail south to France and then set out on his 2,000 mile sea trials.

He says of the race ahead:

I am participating because I love sailing, I enjoy being at sea. I accept the challenges, but I am not a risk taker. I take pride in preparing well and sailing in a seamanlike way. I’m competitive, but realise that in order to do well in this race, I first have to finish.

Commander Abhilash Tomy, KC (38) from Mumbai, is one of India’s most prominent sailors and has been given one of five Special Invitations to join the GGR. A serving officer in the Indian Navy, he has had the advantage, just as French sailing legend Eric Tabarly did, of spending much of his career sailing for his Country.. Abhilash has covered 52,000 miles under sail while in the Navy including a solo non-stop circumnavigation from Mumbai and back in 2012/13. He has also represented India in the 2011 Cape Town to Rio Race, the Spanish Copa del Rey Race in 2014 and the Korea Cup for two years in succession.

To celebrate India’s heritage in building famous singlehanded yachts in the past (Suhaili and Lively Lady spring to mind) Abhilash will be racing a replica of Sir Robin Knox-Johnston’s original winner. Work began at the Aquarius shipyard on Goa in 2016, not with the rudimentary adze, bow drill and hand saw that shaped Suhaili in a Bombay shipyard five decades before, but with the latest CAD design and CNC cutting machinery to produce a much lighter wood epoxy composite replica. The boat is now at the paint stage and a launch date is planned for the end of July.

Cdr. Tomy intends to complete his proving trial by sailing her the 4,500 miles from India to Cape Town, from where the yacht will be shipped to Plymouth for the start of the GGR in June 2018. He says of the challenge ahead:

This event recreates in the closest way possible, the magic of the original race. The emphasis is not on technology and its management, but on seamanship and a direct experience of sea. This spartan philosophy is in keeping with my own view that a lot can be achieved with very little.

The past winter has seen some of the original entrants inevitably drop out but their places were eagerly filled by those on the Wait List. This has left a very strong list of 26 entrants including new names Tapio Lehtinen from Finland, Commander Abhilash Tomy, KC from India, Izabel Pimentel from Brazil, Mark Slats from the Netherlands, and Mike Smith from Australia.

It also gives the opportunity for four more to fulfill lifelong dreams of sailing around the world.

‘The race is limited to 30 entrants, and since we have received more than 150 enquiries, we don’t think it will be long before our list is full again’ says Don McIntyre, the GGR Chairman. For further details, go to www.goldengloberace.com/the-rules/

The race in numbers

Thursday June 14 2018: Suhaili Parade of Sail, Falmouth, marking the 50th anniversary of Sir Robin’s start in that race from Falmouth aboard his 32ft yacht Suhaili. The 30 skippers competing in the 2018 Golden Globe Race will join hundreds of other yachts in Falmouth Harbour with a sail-past salute to Sir Robin. Other historic yachts joining the commemoration include Sir Francis Chichester’s famous Gipsy Moth IV, Sir Alec Rose’s Lively Lady, a replica of Sir Chay Blyth’s original Golden Globe race yacht Dytiscus III and Joshua, which Frenchman Bernard Moitessier sailed in the original Sunday Times Race.
That night, the Royal Cornwall YC will host a Suhaili gala dinner where Sir Robin will be guest of honour.

Saturday 16th June 2018: GGR Race Village opens at Queen Anne’s Battery Marina (QAB) Plymouth with a parade of sail led by Sir Robin Knox-Johnston’s Suhaili followed by Joshua, Dytiscus III, Lively Lady and Gipsy Moth IV. Entry to the Race village will be free and the attraction will be open to visitors from June 16 to the start on Saturday June 30.