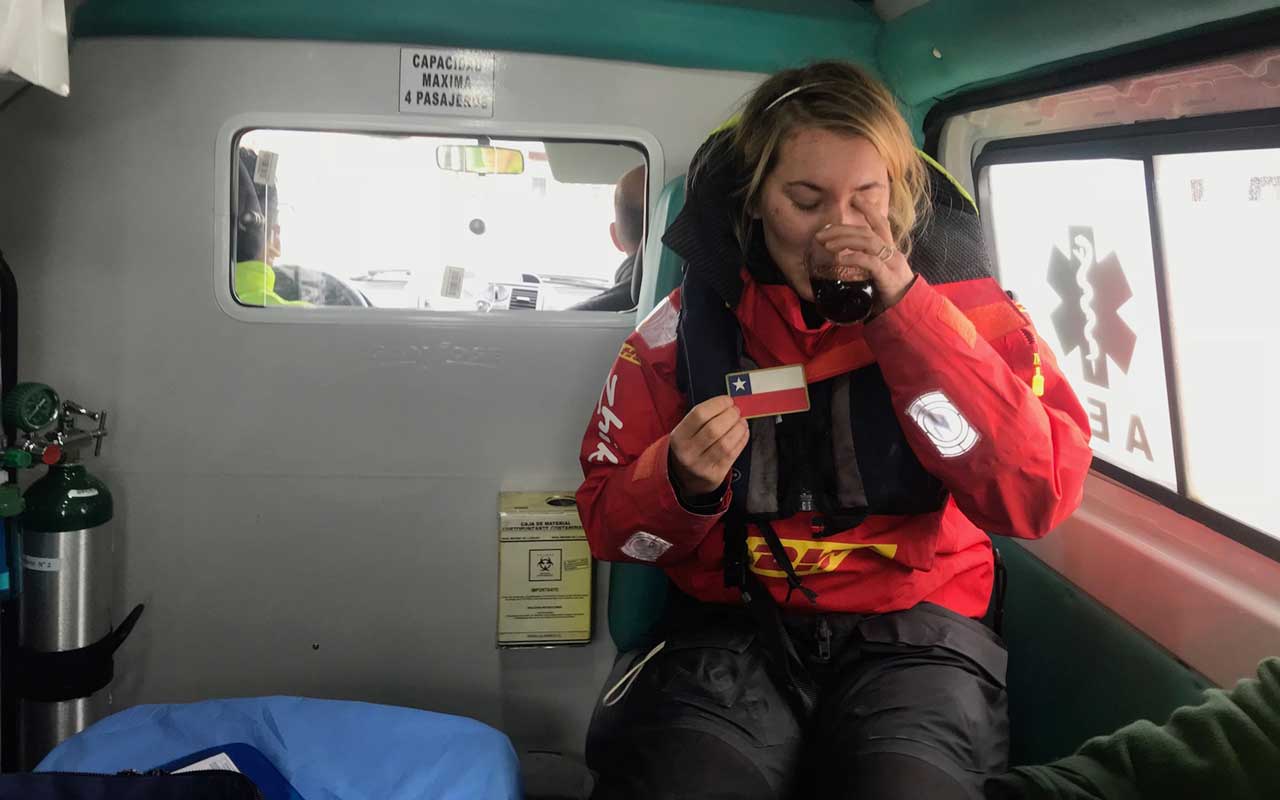 After arriving in Punta Arenas today, I’m still a little wobbly both emotionally and physically as I find my land legs again.

I arrived with a heavy heart, no longer a competitor in the Golden Globe Race – but here is certainly a lot better than the alternative. And I wouldn’t be here today without the incredible support and seamanship shown by so many people over the past 10 days.

I want to start by thanking MRCC Falmouth. After successfully picking up my distress call following the incident on Wednesday 5th December, they worked quickly and efficiently with the Golden Globe Race organisers to pass the information onto MRCC Chile. To the captain, crew and owners of Tian Fu, to whom I owe so much, soon diverted their course having received the request. Thanks to the precision and professionalism of the ship’s captain, I was safely found and lifted aboard, onto a somewhat bigger boat! Sailing away from DHL Starlight was heartbreaking, she stood up valiantly to all that the elements had to throw at her and looked after me until the last. Onboard Tian Fu, although there was an obvious language barrier, I felt very welcome and was made as comfortable as possible for the week-long journey into Punto Arenas.

After 157 days alone at sea and a very emotional week to follow, I was fighting back the tears as I stepped off the ship and saw my mum and oldest brother. My whole family (Tash, that now includes you!) have been my rock from day one of this journey, way back three years ago when I signed up to the Golden Globe Race. I have put them through a lot, and I know I have a lot of making up to do! But I want to thank them from the bottom of my heart for believing in and supporting me in the many, many ways they have – thank you.

To my sponsors – what can I say. I had hoped to make it a full circle, but it just wasn’t to be this time. However, I wouldn’t have even made it to the start line without you and I certainly wouldn’t have been so well equipped. Thank you to Zhik, Selden, Marlow Ropes, Weleda, Adesaskews, Sport Kitchen, Invivo Clinical and of course, to my hugely supportive title sponsor, DHL.

It was lovely to have Jaime and Andreas from DHL here to welcome me in today. DHL have supported me throughout this campaign above and beyond what I had expected. They offered help with logistics, communications support so I could pass on messages to family throughout the race and, the biggest thing for me right now, a ticket to get home!

Having only just touched land today, I have not yet looked at my emails, social media or any media for that matter. However, the race organisers and my family have told me that the support from the public, both sailors and non, has been overwhelming. Thank you so much to everyone who has followed the race and sent messages of support.

If you asked me if I would I do this again, now knowing what it’s really like, I would say yes in a heartbeat! But as I said to the Chilean Navy captain who brought me ashore from Tian Fu, “I created so much work for everyone involved in the rescue,” to which he responded “Of course you must do it again!” You may ask why?! Some people just live for adventure – it’s human nature. And for me, the sea is where my adventure lies. Having grown up admiring Tracy Edwards and Ellen MacArthur, I just knew that one day I needed to try to do this too. Every seafarer understands the risks involved but that’s what makes us stronger and able to overcome other challenges in life.

I can’t tell you what is next beyond spending time with family and friends over Christmas and enjoying a glass of grog, but that fire in my belly is far from out, so watch this space!

I’d like to say a final good luck and fair winds to the remaining five competitors in the Golden Globe Race. I look forward to seeing you all at the finish line!