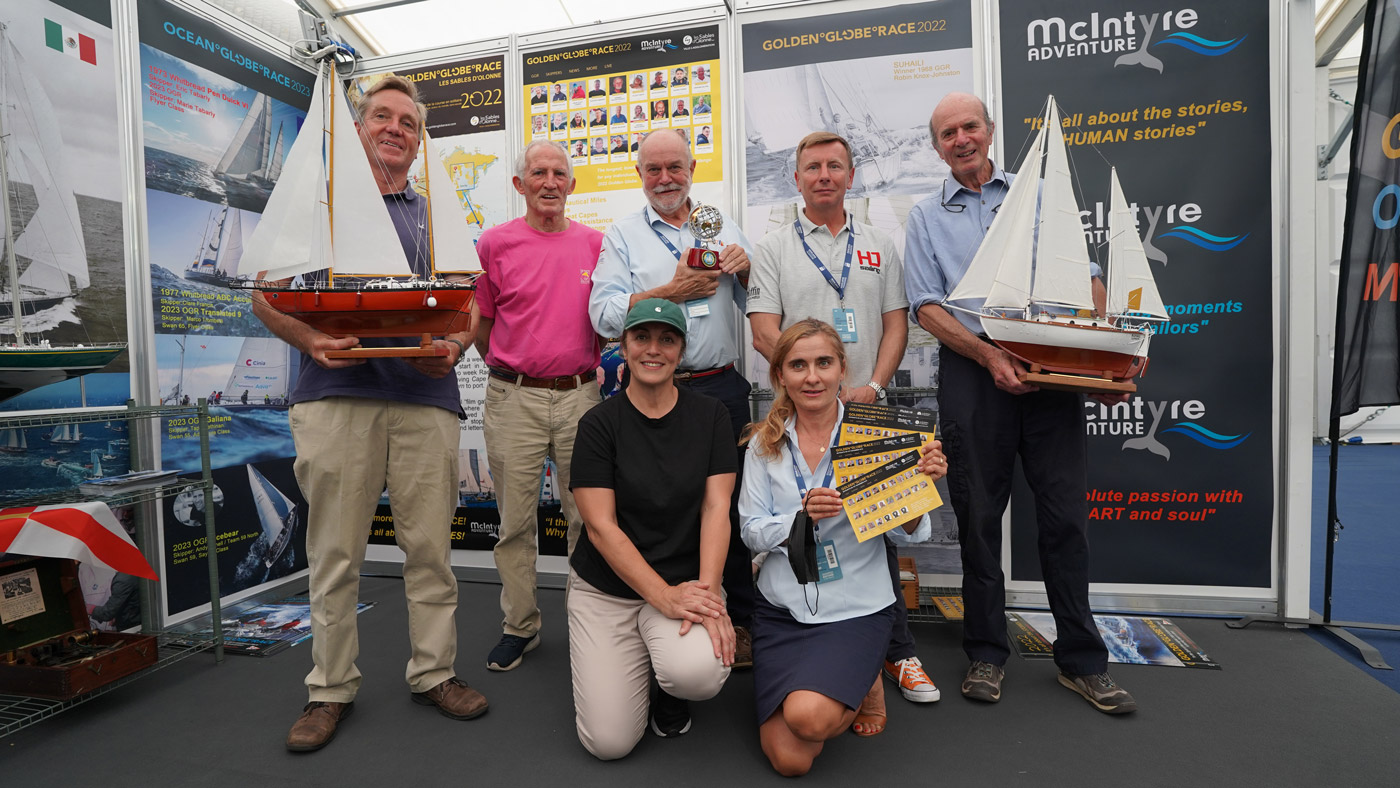 One year prior to the September 2022 start of the Golden Globe Race, Don McIntyre and the GGR team were joined by Les Sables d’Olonne, home port of the race and European capital of solo-sailing at the Southampton boat show.

Being in the UK one year prior to the start of the race was important for us. It is the perfect place to meet old friends such as Sir Chay Blyth; and the GGR 2022 not unlike the original edition has many British skippers as the largest contingent, including serious contenders for victory!

Six-time solo circumnavigator, 79-year-old David Scott Cowper from Britain was excited to meet other entrants for the first time and discuss his Tradewind 35 refit. GGR Founder Don McIntyre has been a close friend of David for the past 42 years and is impressed by David‘s plans and preparation. If he finishes the GGR he may become the oldest circumnavigator to race around the world.

Another UK entrant and three times solo circumnavigator Robin Davie just returned from two years trapped in the US because of Covid, happy to be reunited with his yacht and able to continue work on it. All entrants are watching the clock closely.

Round the world legend Sir Robin Knox-Johnston has accepted to become the patron of the Golden Globe Race going forward, bringing his enthusiasm and expertise to the race and entrants.

Do not expect the challenge to be easy. Once you leave the friendly and safe port of Les Sables, you are on your own for 200 or more days without companionship or support. But if it were easy, where would be the challenge. It is from achieving the really difficult that true satisfaction is to be found.

A Virtual Golden Globe Race will be available to the public, with unique features such as celestial navigation, mandatory off-watch time, and random ocean racing issues to get close to the real thing without being cold and wet.

The Golden Globe is about real human stories but Virtual Sailing is a new sport. We have partnered with Realsail to develop a world-first Virtual Golden Globe game that is like nothing seen before: the VGG Race uses celestial navigation with real-time live stars visuals, skippers experience real breakdowns and sail problems, only sailing with windvanes and declaring when they are asleep and not under command. This will be the longest running virtual race in the world, it will sail with the real GGR fleet in real-time weather. It is tough!

Media outreach has been improved with 4 tweets a day per skipper, a 15-minute satellite recorded interview and bi-weekly exclusive media interviews, in addition to the film drop interviews in the Canary Island, Cape Town, Tasmania and Punta del Este.

The Joshua Class has been dropped from the 2022 GGR, but a new opportunity for entrants to BUILD a Joshua One Design replica to race in the 2026 GGR has been announced. Entrants will buy a CNC steel cutting file to start building their JOSHUA.

Coming from IRC and one-design offshore racing, I applaud the return of retro-sailing on older but sturdy designs, putting sailors and seamanship back at the centre of the performance. The profiles and experience of entrants are diverse but their level of preparation is remarkable, and their enthusiasm second to none.

Captain Coconut, Mark Sinclair who stopped halfway during the 2018 GGR due to a lack of water and barnacles, can under the Notice of Race continue the race in Chichester Class. Mark will now set sail from Adelaide once again on December 5th this year, exactly three years since he stopped racing, and sail directly to Les sables d’Olonne solo, and non-stop to finish his GGR2018! He will then start again in the 2022 GGR!

Les Sables d’Olonne is the stage for the most prestigious sailing competitions. A magnificent setting and infrastructures to host and experience the greatest of maritime adventures. In Les Sables d’Olonne, we live for the sea ; and we are proud to share it with the world. Our companies, clubs and associations are wholly committed to the excellence and influence of our sailing networks.

While an incredible edition of the Vendée Globe has just come to an end, our town is now getting ready to bring you the next unmissable events in single-handed ocean racing. With the Mini-Transat, the first of which will take place, now, in September, the Vendée Arctic and the Golden Globe Race, which will be held in 2022, the spirit of the Sablais and the Vendée region will continue to spread inspiration across the oceans.

If you missed the GGR team at the Southampton Boat Show, you can still catch them in Le Grand Pavois La Rochelle from 28/09 to 03/10, Le Nautic Paris in December and Boot Dusseldorf early next year, or in Les Sables d’Olonne any other day!