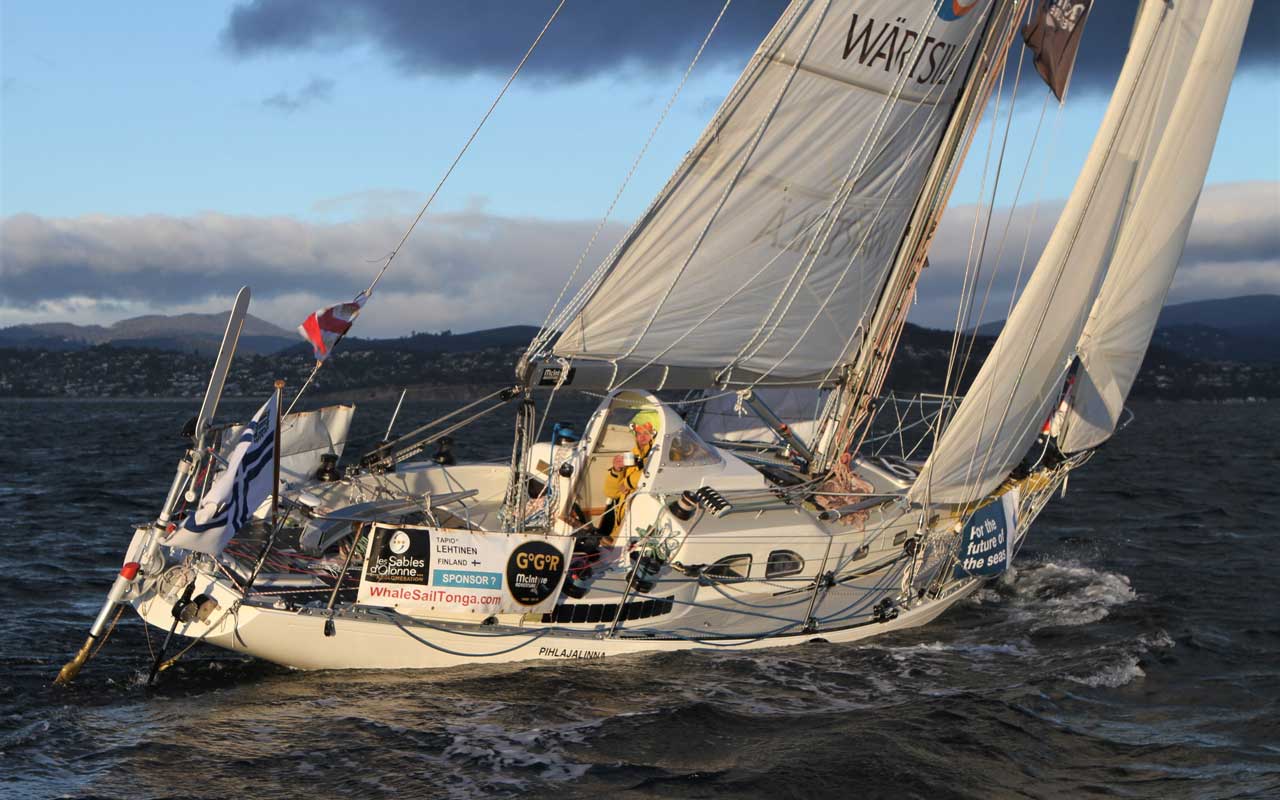 Jean-Luc Van Den Heede, the embattled race leader struggling with a damaged mast sustained during a storm 1,900 miles west of Cape Horn, has decided to continue in the race back to Les Sables d’Olonne.

In a dramatic satellite phone call to Race Chairman Don McIntyre early today, the 73-year old solo circumnavigator who continues to enjoy a 1,500 mile lead over second placed Dutchman Mark Slats, said that he had decided to make the best repair he can at sea and continue in the race. The Frenchman told McIntyre “The worst that can happen is that I lose my rig, and I have my jury rig at the ready.

At the moment, his only other option is to divert 2,000 miles off course to a Chilean port and be demoted to the Chichester Class for making one stop to affect repairs. He believes that if he can get round Cape Horn and start heading north up into the Atlantic there are many more ports of refuge that would be closer to hand, should he have further issues with the rig on his Rustler 36 Matmut.

This makes a real race to the finish. Mark Slats (Ohpen Maverick) has around 90 days to catch up and now needs to average 1 knot more than Jean-Luc over the remaining distance back to Les Sables d’Olonne. This means that Mark has a real incentive to beat Matmut on his own terms, while Jean-Luc must push as hard as he dare within the limits of his damaged mast.

This is a far better proposition for the fiercely competitive Dutchman than by winning by default and have the result tarred, as Sir Robin Knox-Johnston did quite unjustly 50 years before with the words ‘but he only won because….(In RK-J’s case, Frenchman Bernard Moitessier who had been 19 days behind the Englishman at Cape Horn, decided to carry on for a second turn around the world ‘to save my soul’.)

Van Den Heede has applied for a time penalty to be added to his circumnavigation time after he used his satellite phone twice after the mast was damaged to call his wife. The GGR rules only allow sat-phones to be used as a safety measure to call Race HQ. All other communications must be made via HF, VHF or Ham Radio Net, just as they were during the first Sunday Times Golden Globe Race in 1968/9.

Race organisers will announce their decision tomorrow, but McIntyre conceded today that if Van Den Heede gained no material advantage from the two calls, he was mindful to issue an 18-hour penalty, the same as that given to American Istvan Kopar after he stopped in the Cape Verde Islands to repair the windvane self-steering gear on his yacht Puffin.

Finnish skipper Tapio Lehtinen finally reached the BoatShed Com Hobart film gate in 6th place on Tuesday after a 54 hour sleepless battle against fickle winds to sail round the bottom of Tasmania and up the Derwent River. His Gaia 36 yacht Asteria suffered a terminal engine failure early in the race, and without oars, the Finn had no other option but to wait for the wind to fill in.

‘I have been learning to manoeuvre my 6 Metre yacht without an engine for 36 years, but this boat is a little clumsier, especially with all the goose barnacles on the rudder’, he explained when finally at anchor.

‘The barnacles on Asteria are every bit as bad as they are on Uku Randmaa’s 3rd placed Rustler 36 One and All‘, Don McIntyre observed. ‘Tapio has a huge infestation which must be costing him at least 1 knot in boat speed‘.

Barnacles apart, Lehtinen spoke generously about his experiences to date. ‘I love the sea. I love sailing. This race is fantastic and gives me great energy. There is great camaraderie between the sailors and I mostly like the sea, the life, the birds and the waves.‘

He said that he had seen very little pollution. ‘The challenge is to keep the oceans as they are. I haven’t seen any harm done by man in the Southern Ocean.’

Talking about his boat, which was extensively rebuilt for the race but launched very close to the start, he added:

This has been a do-it-yourself kit from the start and during the Atlantic leg, I had my tools, glues and screws out every day trying to fix the problems which cost me a lot of time. But I am pretty happy with the state of her now. It would be nice to have a working engine, but I feel safe with the boat, which is very important. This race is very competitive but the most important competitor is the sea and I think the boat is now fit to fight.

Asteria and her skipper came through last week’s storm unscathed.

At times the winds are frightening but the boat was rebuilt like a tank and I didn’t feel the storm from inside. “My Windpilot (wind vane self steering system) has been working really reliably so I haven’t had to hand steer at all. I don’t need to be on deck at all other than to adjust the sails and the pilot. I may have been one of the luckiest in the fleet avoiding the worst storms and have only had the mainsail down to the 4th reef and storm jib set once.

After spending the night at anchor, Lehtinen extended his stay by another 10 hours to check his rig and fix a halyard issue at the top of the mast. He eventually set sail again at 18:30 local time to chase after 5th placed Istvan Kopar, having spent 36 hours at the Hobart Gate.

The next GGR boat to arrive at the BoatShed.com Hobart film gate should be Australian Mark Sinclair sailing his Lello 34 Coconut. He has posted an ETA of December 15.