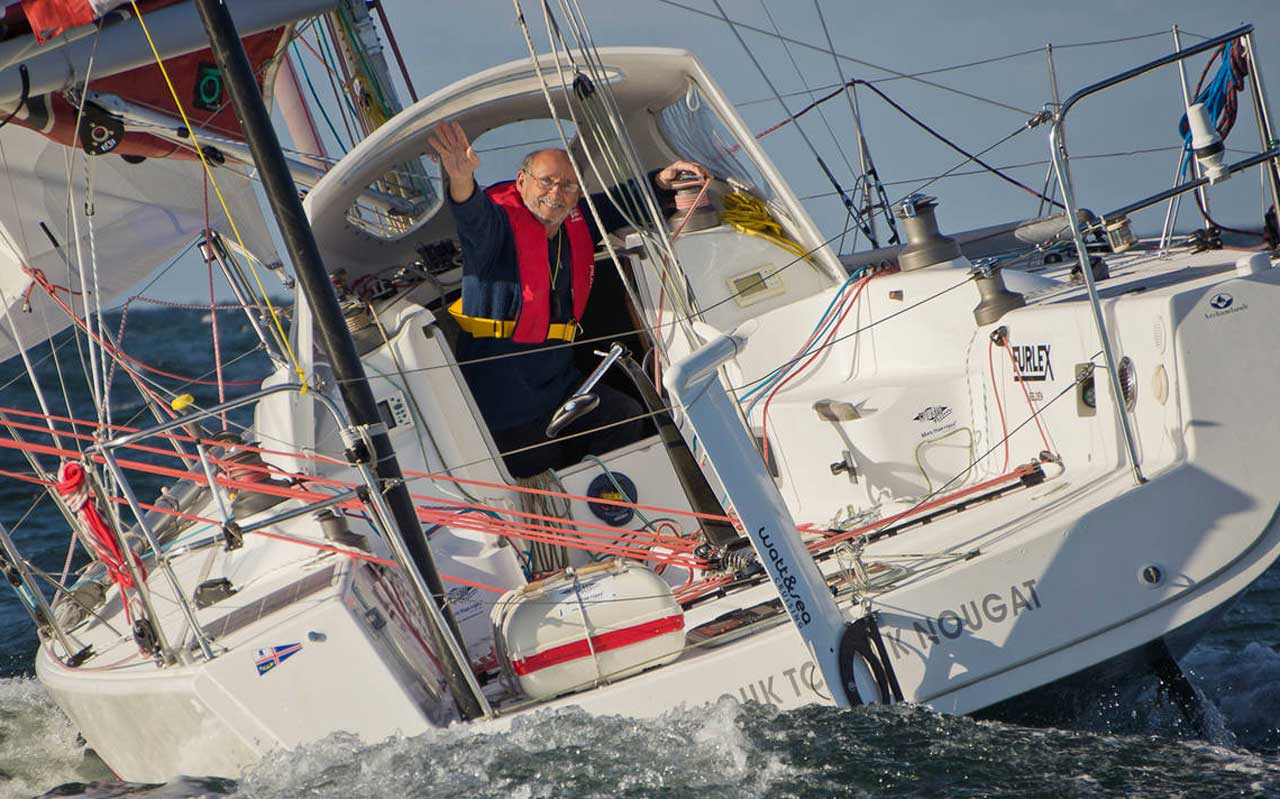 It’s a place of extreme beauty, a true wilderness that captures the imagination of sailors and reminds them of their insignificance. Nowhere else on earth is like it. It’s power is unquestioned and unchallenged. You never beat it, just move and bend with it in deep respect. You venture south at your own risk with an open mind in the knowledge that you may not return. The allure of the Great Southern Ocean is steeped in history and folklore. For many the attraction is to successfully round Cape Horn, a moment mixed with pride, excitement, awe and most often great relief.

To succeed you must believe in yourself and your ability, TRUST YOUR BOAT and prepare for the worst.

JEAN LUC VAN DEN HEEDE first coined the fun phrase Petit Escargot (little snail) describing the 36ft full displacement yachts of the GGR when he joined the Race in 2015. He has sailed five times solo around the Globe in larger boats up to 80 ft long including his BOC and VENDEE GLOBE yachts. He knew the challenge was tough, indeed very tough but stakes his life on his Rustler 36 MATMUT as a safe ocean-going yacht, up to the demands of the Southern Ocean and right for this simple yet serious adventure.

The essence of the Golden Globe Race rests with strong honest boats, basic reliable sailing systems, no computers, world class safety gear and full risk minimization. It’s a UNIQUE challenge, accessible and affordable to any man or woman with the passion and desire to do it.

The choice of boats for the GGR is defined within well-conceived parameters specifically relative to the event. At 32-36 ft they are proven ocean voyaging yachts conceived by respected designers. The keels, rudders and hulls are over engineered by modern standards. These designs are not prone to damage from hitting underwater objects and their long keels track well under windvane self-steering even in heavy weather.

Only six of the original 17 starters in the GGR are still sailing and there have been five Southern Ocean dismasting. Some may think this is because the boats are too small, too slow and cannot outrun Southern Ocean storms. History does not support this assumption. Many ordinary well-prepared yachts from 22ft to 38ft have safely solo circumnavigated via the Great Capes and continue to do so. Speed may sometimes help in the Southern Ocean, but many modern fast yachts are still overcome. My 50ft 1990 BOC Challenge yacht Buttercup and another entrant Kanga Birtles in his 60ft yacht could not outrun the same storm and we both rolled 360 (both rigs survived). Watch the video here.

Typical racing sailors would never use these Petit Escargot for normal racing and have trouble coming to terms with their features and ocean-going ability. Most have never sailed them, nor been in the Southern Ocean and have not used windvane self-steering. They feel more modern designs with fin keels and outboard rudders may be safer. Again, history does not support this assumption. Modern fin keel lightweight surfing boats often need electric Auto pilots to steer, require constant human input and effort to control these sometimes-unforgiving designs in heavy weather. These designs simply have less ability to look after themselves. GGR style boats are much more forgiving in heavy weather and sail well under wind vanes without the need for electrical power.

A few years ago, I was involved in the RESCUE of French solo sailor ALAIN DELORD, sailing a fast, light modern fin keel 35ft yacht solo around the globe. He was unable to control his boat in a storm and then was dismasted 440 miles south of Hobart in Tasmania, spending four days in a life raft before we were able to recover him. Watch the video here.

Collectively I have spent 3.5 years of my life in the Southern Ocean over 22 years on yachts and small expedition ships and have 48 years sailing experience. I have seen her moods. I know that the better prepared you are the more luck you have, but I also know that sometimes, you can have the best prepared boat with the best skipper, yet that GUARANTEES NOTHING.

History makes this very clear. Last year’s OSTAR solo transatlantic race saw FIVE finishers from 15 starters. The early Vendee Globe races saw on average only HALF the fleet finish. In 1996-97 only SIX of 16 starters finished and in the 2008-9 Vendee Globe 18 of the 29 starters FAILED TO FINISH. The retirement statistics of problems (3 keels, 3 steering and 7 mast issues) make interesting reading.

The 2018 Golden Globe Race is re-creating and making history. It is new, innovative and different in many ways. It is seen as a Cultural Renaissance in sailing. There is no such thing as the PERFECT BOAT in any ocean or situation. The GGR Petit Escargots are RIGHT FOR THE SOUTHERN OCEAN and what is quickly becoming known as the TOUGHEST RACE IN THE WORLD.