Philippe Péché is one of France’s leading sailors.

This proud Breton has covered more than 300,000 miles racing everything from monohulls to giant multihulls. Péché, who has lived in Australia for the past 20 years but resides back in Britany, France, has twice won the Jules Verne Trophy with Bruno Peyron, completing the circumnavigation within 50 days. He has also sailed with other famous sailors including Eric Tabarly, Michel Desjoyeaux, Ellen MacArthur, Armel Le Cléac’h and Alain Gautier, and is the 8th French skipper to be sponsored by the Vendée based PRB masonary brand.

Philippe says of the GGR:

It is an amazing challenge and adventure that comes at just the right time for me.

Philippe has bought the famous Rustler 36 Gollywobbler, which British yachtswoman Ann Fraser competed in the 1986 2-handed transatlantic race, and cruised from San Diego to Alaska and back.

Renamed Grégal, a name shared on all his Father’s yachts, she underwent a complete refit during the 2016/17 winter and competed in several events during 2017, including the Spi Ouest-France Easter regatta and the Celtikup ocean triangle race between Lorient, Douarnenez, Falmouth and back to Lorient.

Philippe says that he learned a lot more about the boat and his own capabilities as a solo sailor during his 2,000 mile qualifying trial.

This was the first time I have sailed singlehanded and I fell into the rhythm very quickly. I stayed within the Bay of Biscay and tested the boat in varying conditions and different wind angles. I learned a lot about the yacht’s performance and how to live inside a small boat for an extended period.

The yacht was renamed PRB in February 2018. 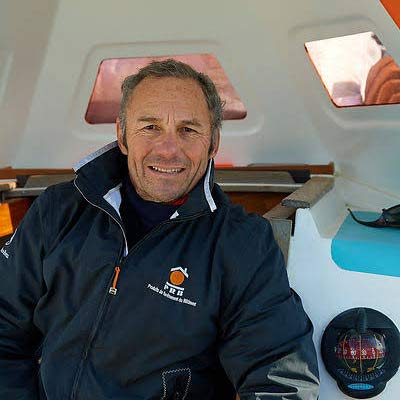