Retired: 23 September 2022 – family reasons
Mark retired on the 23rd September at the Lanzarote film drop. He stated that due to slow progress between Les Sables d’Olonne and the Canaries, Coconut would not be able to reach Cape Town for his son’s wedding which he planned to attend, continuing in Chichester Class.

Mark Sinclair entered the 2018 edition of the Golden Globe as one of the fastest entrants to sign up. Since then Mark became the famous Captain Coconut!

Mark Sinclair has always been passionate about sailing and the sea. In 1968, at the age of 10, he started sailing, at the time when Sir Robin Knox-Johnston departed to become the first to complete a non-stop solo circumnavigation. In 1984, Mark completed two solo crossings of the Tasman Sea and gained his Yacht Master Ocean Certificate. Before entering the GGR, when on leave from work, Mark typically sailed his S&S 41 Starwave single-handed around remote areas of Australia. When Mark found out about the 2018 GGR, he applied immediately, sold Starwave and deferred his plans to compete in the 2018 single-handed trans-Tasman race; Mark purchased Coconut, a Lello 34 class yacht, for the GGR.

Mark’s professional background includes hydrographic surveying of remote areas in ships, small boats and aircraft. He served 20-years in the Royal Australian Navy, commanding three ships and navigating four, at the time when celestial navigation by sextant was still the primary means of offshore navigation. He retired from the RAN as a Commander in 1996. Mark currently works as the Director of Fugro’s Hydrographic Services in Asia-Pacific and conducts hydrographic surveys worldwide. Mark is married with three children.

Coconut is a strong, seaworthy Lello 34 class yacht with a narrow beam and traditional long keel. She was built in Durban, South Africa in 1980. Long before Mark Sinclair acquired her, Coconut had already circumnavigated the globe, combining a cruise in the Mediterranean and through the Pacific Islands before returning to South Africa. When Mark saw a YouTube video of her sailing in the Roaring 40s from Africa to Adelaide, he was so impressed that he sold his yacht Starwave and purchased Coconut for his entry in the 2018 GGR.

Although of sound design, a significant refit was required to prepare Coconut for the race. This included building internal hanging knees to strengthen the hull, deck and coach house for the rigours of the Southern Ocean, fitting an aluminium watertight door, new hatches and windows, new chainplates, rigging, sails, electrics and safety equipment. The original mast was completely stripped back and converted from a single to two-spreader rig for additional strength and all fittings were rebuilt. The original Aries windvane and Farymann 22 HP diesel are retained and refurbished.

Coconut was shipped to Europe in January 2018 and from the start of May, Mark set up base camp at Plymouth Yacht Haven in Turnchapel Devon, to conduct final preparations for the start of the GGR, whilst continuing to work remotely from an office in the nearby Fugro Academy training facility. 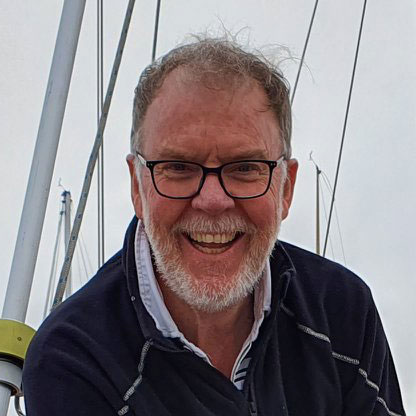