The 5-time circumnavigator already holds the record for the fastest solo west-about non-stop circumnavigation against the prevailing winds and currents, and has been a podium finisher in four previous solo round the world races. He finished 2nd in the 1986 BOC Challenge Around Alone Race, 3rd in the 1990 Vendée Globe Race, 2nd in the 1993 Vendée Globe, and 3rd in the 1995 BOC Challenge Around Alone Race. Van den Heede bought a Rustler 36 class yacht in august 2015 and spent the first few months test sailing her out in the Atlantic before commencing a complete refit in his homeport of La Sables d’Olonne.

He has won sponsorship from the French insurance group MATMUT.

Jean-Luc says of the GGR:

From all my experiences, I am well aware of the difficulties this race poses. The slow speeds of these classic old boats with their long keels, the absence of weather information, the loss of all electronics and reliance on a sextant to plot positions, the lack of terrestrial contact, and the replacement of an electric pilot with wind vane self steering, will make this test even more random and difficult than the Vendée Globe.

But this is good. I want to re-live the conditions and challenges that my sailing predecessors enjoyed and to this end I have optimised my Rustler 36: New mast, new rigging, new engine, new sails, watertight bulkheads, and new winches. I am very conscious of the problems that are likely to occur during our 8 or 9 months of sea and have done everything to make Matmut safer. I am also trying to get myself in the best physical condition with the assistance of a physio, a coach – and my bicycle! I have also rediscovered the environment and comradeship I loved so much during the first editions of these races. We are all conscious that this will be a difficult adventure and that engenders a strong bond between us that I have not seen since the first Mini Transat 6.50 and Vendée Globe race back in the early ‘90s.

My goal is to be in good health at the start with a top boat, then, take each day in turn, absorbing the emotions and thoughts of those who preceded us: Slocum, Moitessier, Alain Gerbault, Vito Dumas and of course, my good friend Sir Robin Knox-Johnston who set such an example for us all 50 years ago.

Jean-Luc van den Heede completed a 6-month refit of his Rustler 36 class yacht Matmut in 2016, replacing her mast, rigging, sails, ropes and engine. He also completed the compulsory test sail under jury rig and spent the 2017/18 winter months sailing her in the Bay of Biscay and Atlantic to test the yacht in strong winds with assistance from former GGR entrant Lionel Regnier. 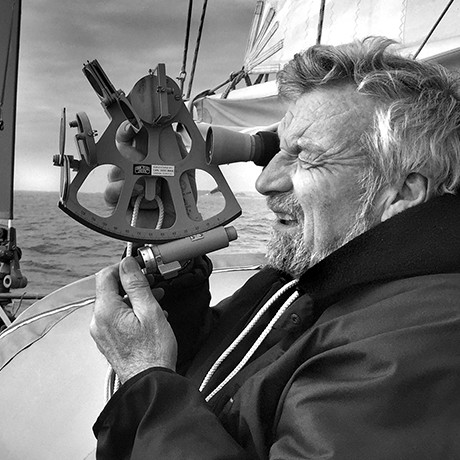