Guy started crewing a while back on the South coast of England, racing and cruising across the Channel to France and back. While doing bow he was dreaming of the great solo adventures of the time, such as the Ostar, BOC Challenge and Vendée Globe, but those were financially out of reach, so he naturally leaned towards the cheaper option: the Jester Challenge.

In 2010, he entered the Jester Challenge in a Contessa 26, a boat designed for coastal cruising which he planned to sail from Plymouth to Newport RI, but a broken bulkhead and disintegrating boat under way meant turning back for repair. Undeterred, Guy did repair the Contessa, and not wanting to wait another four years, did the Jester route and back in 2011, and sold the boat upon returning home.

In 2012, he downsized further to a Corribee 21 designed for coastal cruising, stripped, rebuilt the boat, and sailed to the Shetland islands in 2016. From there, he decided to take the Northern route for an Atlantic crossing that took 55 days and a capsize, before coming back in 2017.

This was enough to sharpen his appetite for long distance racing on bigger boats, and while Guy had his eyes on the GGR, he entered the Clipper Race 2017-2018 on board NASDAQ and UNICEF for a 21.000 miles round-trip to see if he liked it.

He did… Guy came back on the Clipper 2019-2020 as Skipper of the ‘Dare to Lead’ 70-ft one-design, for a famously cut-short edition, and ended-up stranded in the Philippines by Covid after completing 2/3 of the journey.

It is there, in Subic Bay that he first heard of a GGR veteran Tradewind 35 in Panama and seriously for sale. Guy called and quickly made the deal, climbing a mountain top for network to complete the transaction online.

After month of waiting for the borders to re-open, guy flew to Panama and sailed Sagarmatha back to the UK through the Caribbean all the way to Jamaica, before crossing to the Azores and eventually sailing back to Whitby, while completing his qualification mileage and planning the upcoming refit underway.

With serious solo mileage on small boats and a good experience of repairing boats under way, Guy is certainly one to watch!

Sagarmatha was built in Lymington by Blondecell Marine as the designer’s John Rock personal yacht. In her second ownership she sailed to New Zealand and Australia and was bought by GGR Founder and President Don McIntyre who then thought he could -à la Jeantot- organise and race the first edition. Alas, Sagarmatha left Les Sables D’Olonne as Kevin Farebrother’s boat, then was bought by Michael Ray and sailed to Panama. Guy is the 7th and careful owner of this already GGR legendary boat.

Sagarmatha was well prepared in Whitby, the forward bulk has been made watertight with and empty storage area forward for sails, and an extra 15 (!) watertight compartments courtesy of the Corribee experience, making the boat virtually unsinkable.

The boat was rewired, plumbing is entirely new, and all systems have been simplified to the maximum to limit potential problems and jamming.

The rig has been taken down, replaced by a deck-stepped Z-spar mast of generous section changed to double spreader, that will be completed with a wardrobe made by Hampshire wizard Peter Sanders.

Boat has spent the 2021-2022 winter in the shed planning to splash early May for jury-rig test, waving goodbye to Scarborough YC before going to Ipswich to step the Z-Spars mast, and then sail down to her Lymington birthplace to receive the Sanders wardrobe.

With his experience of heavy weather in smaller boats, the Tradewind 35 will be palatial for Guy’s GGR 2022 voyage and a good companion for his round-the-world adventure! 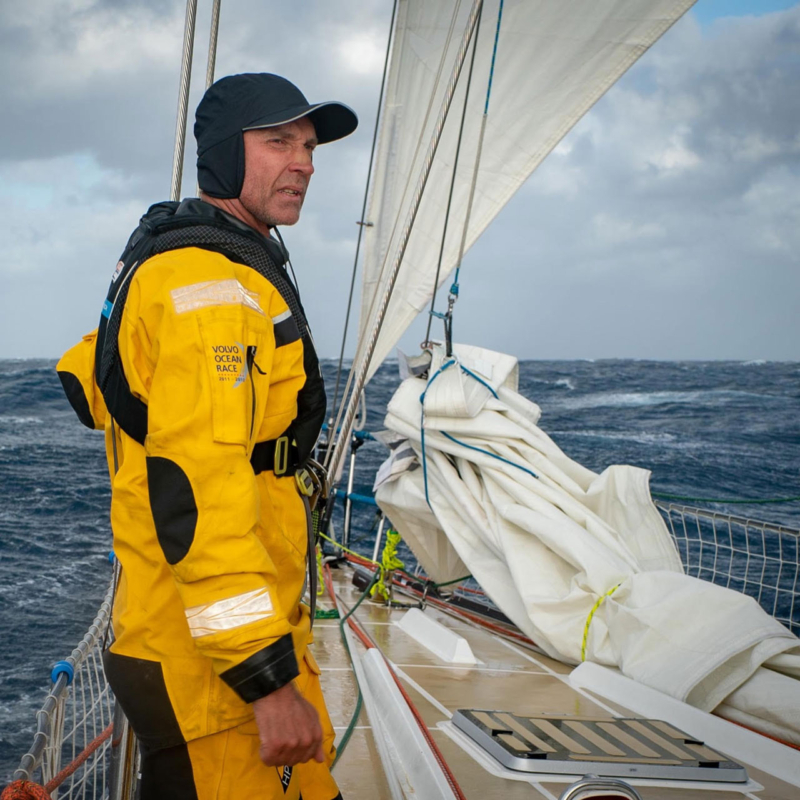