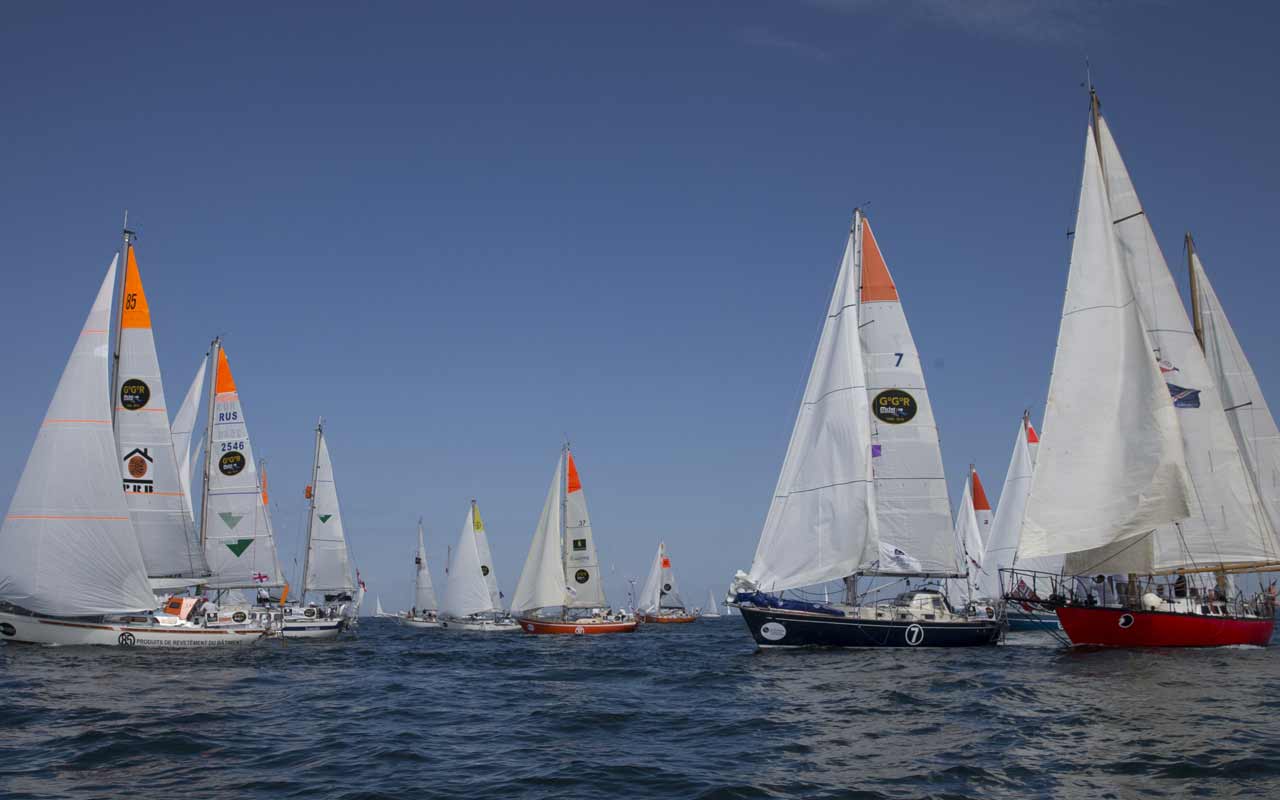 They have 30,000 miles to sail over the next 9-10 months, but judging from the start today of the 2018 Golden Globe solo non-stop around the world yacht race from Les Sables d’Olonne, the leaders will be fighting over every mile.

First to cross the line at Noon (CEST) was the fiercely competitive Frenchman Philippe Péché aboard his Rustler 36 PRB. He has ensured that she is one of the lightest in the 18-strong fleet, and carrying a huge lightweight genoa, Péché pulled out a 100 metre lead within minutes of Sir Robin Knox-Johnston, winner of the first GGR 50 years before, had fired the canon from the deck of his historic yacht Suhaili.

Behind him, Jean-Luc Van Den Heede, who has five previous circumnavigations to his credit and at 73, is the oldest skipper in this Race, appeared to tangle with Tapio Lehtinen’s Finnish yacht Asteria, and one hour after the start were still locked in a 3-way tie with Dutchman Mark Slats (Ohpen Maverick) for third place. Their regatta style tactics allowed Russia’s Igor Zaretskiy to sail his Endurance 35 Esmeralda quietly into second place.

Another in the mix was Are Wiig’s 32ft Norwegian double-ender Olleanna along with Indian Navy pilot Abhilash Tomy sailing a wooden replica of Sir Robin’s Suhaili.

The dark horse within the fleet appears to be Nabil Amra’s Palestinian flagged Biscay 36 Liberty II, which was one of the last boats across the line but last night was flying through the fleet at 4.6knots as apposed to 4.2 for the leaders. Like Igor Zaretskiy, he is taking a more southerly route towards Cape Finistere while others were heading well out into the Bay of Biscay in the hope of finding stronger winds.

One skipper, Italy’s Francesco Cappelletti, remains in port preparing his Endurance 35 007. The yacht has still to pass safety inspection and Cappelletti has yet to complete 3 days of solo sailing trials. He has until Noon next Saturday to beat the deadline to join the race.

The leading yachts are expected to reach the first ‘gate’ set off Lanzarote in the Canaries around 11th July to hand across film and letters. The race is expected to take 9-10 months with the leaders taking between 240-250 days to complete the voyage unaided.

Today, technical partner Boatshed.com announced that they would provide a £5,000 cash prize the for the fastest skipper around the world – the same amount that the Sunday Times newspaper posted for its race 50 years ago.

The yachts are being tracked by satellite. Visit goldengloberace.com/live-tracker/ for latest positions.