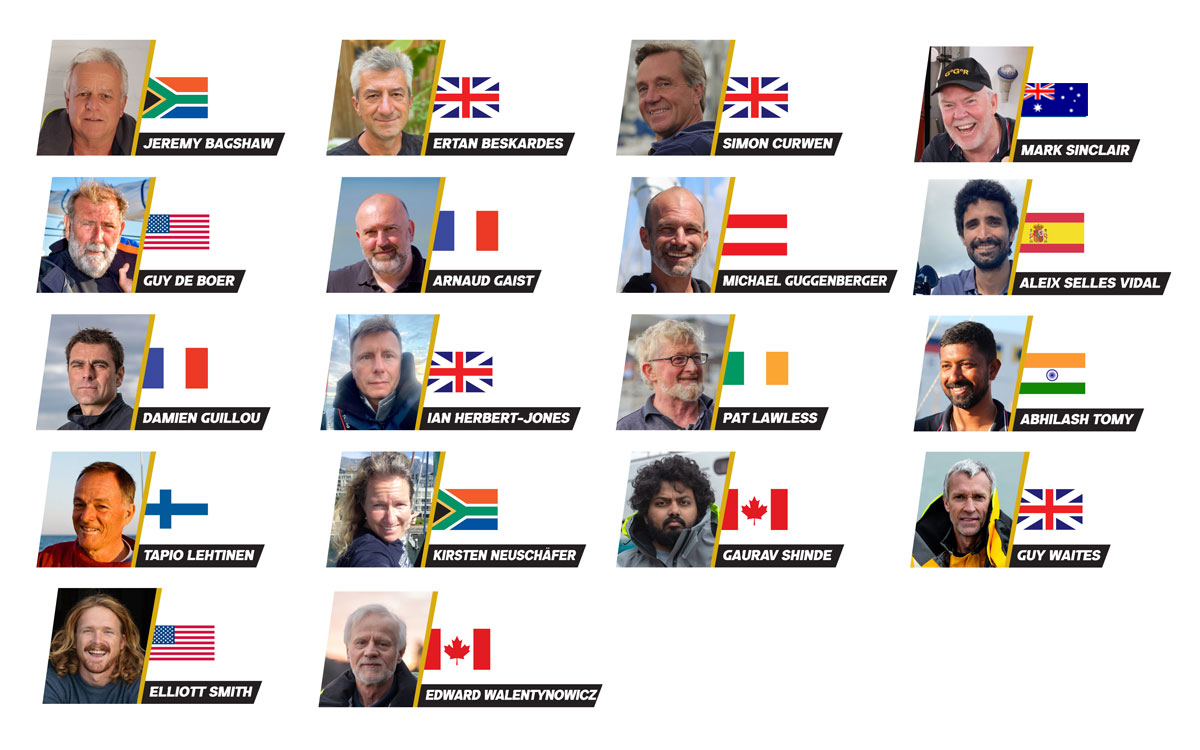 Recreating the original Sunday Times 1968 Golden Globe Race, a solo race, truly without assistance and without GPS or electronics on board, will start from Les Sables d’Olonne on September 4

A village and two weeks of celebration will precede the Grand Departure.

Check out the NEW teaser: ‘Golden Globe Race, 200 days alone against the elements’:

Downloadable version with native broadcast authorisation on your media

A legendary and noble adventure: the longest sporting event in the world!

In 1969, Sir Robin Knox-Johnston became the first navigator to sail around the world, non-stop and without assistance. It took 312 days, alone against the elements.

Who will succeed these two legends of the seas?

18 sailors of 11 nationalities are taking part in this edition.

Among them: the Frenchman Damien Guillou – who notably worked for the preparation for the Vendée Globe of Jean Le Cam in 2016 and Kevin Escoffier in 2020. He will sail a Rustler 36 named PRB, his sponsor twice winner of the Vendée Globe.

There is also the Indian commander Abhilash Tomy. Hailing from Mumbai, who is one of the most prominent sailors in India having been the first Indian to sail solo non-stop around the world. During the 2018 Golden Globe Race, after 83 days at sea, an injured Abhilash Tomy had to be rescued thousands of miles from Australia. He takes his revenge on this 2nd edition of the GGR.

Only sextant, compass and nautical charts are allowed

All the boats are 32–36-foot monohull sailboats, manufactured before 1988, whose technical characteristics are similar to SUHAILI, on which Sir Robin Knox-Johnston won the event in 1969. The only concession is the presence on board of all modern safety equipment, including a secure survival bag, containing geo-located means of satellite communication, which can be activated in case of absolute necessity, as well as a jury rig if the skippers ever dismast.

The skippers are expected on the Vendée Globe pontoon from August 17th.

A festive and family Village will open on August 20 on the Place of Vendée Globe; on that day a large fireworks display will be fired over the bay to celebrate the adventurers.

For two weeks, the people of Les Sables d’Olonne and visitors from all over France and the world will live to the rhythm of the Golden Globe Race and will be able to meet the skippers and discover these unique specially prepared yachts before their big departure.

Concerts, boat parade, French ‘aperitif guinguette’ atmosphere, introduction to Astro/celestial navigation and historic displays including large models of the nine original 1968 Golden Globe Entries, from August 20 to September 4, the Golden Globe Race Village will be the heart of the Sailing world.

On September 4, all lovers of sailing and great adventures will meet at 1:30 p.m. on the quays of the mythical channel of Les Sables d’Olonne to encourage and farewell the skippers on a bold journey.

Les Sables d’Olonne, port of the mythical Vendée Globe, is proud to welcome this new edition of the Golden Globe Race.

This adventure carries with it our soul and our history: the courage to set sail, to set off into the unknown.

We are going to live a great Adventure which has many surprises in store for us and promises to keep us going as the competitors are motivated to become legends.

Friends of the sea and maritime adventure, welcome to Les Sables d’Olonne, one of the Most Beautiful Bays in the World.

Yannick Moreau, Mayor of Les Sables d’Olonne and President of the Agglomeration

And many other activities every day, find the program by clicking here.