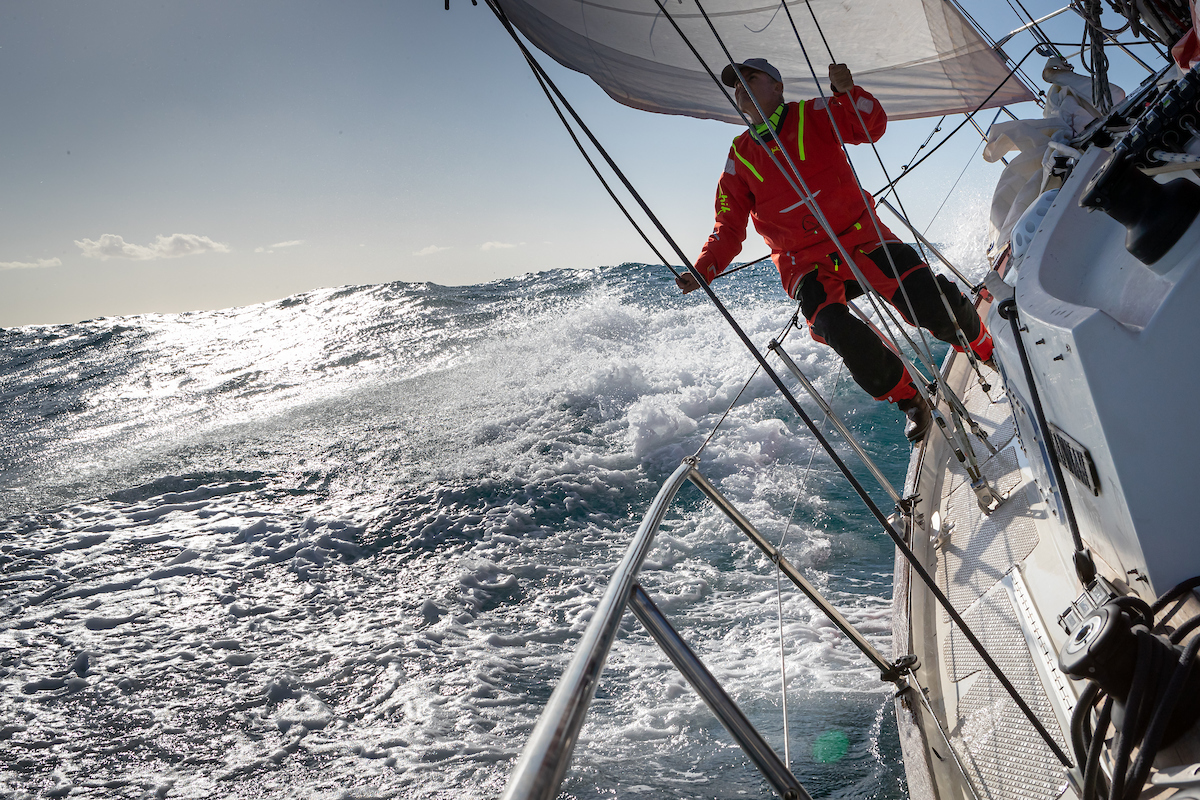 Feature picture above: Guido Cantini aboard Hannah of Cowes the Vancouver 34. Due to personal issues, he had to retire from 2022 GGR but will participate in the 2026 GGR. Phtoto © Guido Cantini/Hannah Racing

A respectable fleet will remain, for what is an extreme nine-month challenge.

The 1968 Sunday Times Golden Globe Race was the first ever yacht race around the world. Nine started and only one finished. The 50th Anniversary 2018 Golden Globe had 18 starters and only five finished.

The third edition starts in two months from Les Sables d’Olonne and just getting to the start is too much for some! At least four of the current 22 entrants are likely to retire, or be removed from the race due to challenges meeting the strict Qualification and Safety Regulations – some of the toughest in the world of sailing.

Two entrants whose yachts are ready to go are sadly facing health issues and may not be signed off by the organisers medical team, MSOS.org. It is likely they will have to officially retire from the GGR in the weeks ahead. The oldest entrant and highly respected UK sailor, 80-year-old David Scott Cowper is struggling to complete a two-year refit of his Tradewind 35 yacht. Electrical contractors who were scheduled for various tasks cancelled their availability. He has been struggling to find replacements. The delivery of his mast and rigging was set back and now he is many months behind schedule. A lack of skilled workers has meant he is doing all the work himself. With the start just weeks away, it is highly likely he may not make the start.

Meanwhile Canadian entrant Edward Walentynowicz is about 850 miles east of Halifax sailing his Rustler 36 to Les Sables d’Olonne in great style. His latest report suggests all is going well:

Cold night, drinking hot black tea with lemon and sugar. Sailing slow. Just entering the maximum spread of drifting ice area, just the southern tip of it. We are deep in the maximum spread of icebergs. According to the forecast, there should be no ice here for the next few days. Cold, fog, ice, cold water, black around! Remember Titanic? Remember all the graves in Halifax? It happened here. No gales, no storms – fantastic weather for a few days.

10 months ago he sailed his yacht solo from Les Sables d’Olonne to Halifax to complete his refit so should be well prepared for the GGR with a double Atlantic crossing.

Fellow Canadian, Gaurav Shinde is not so lucky. He is a month behind schedule and has not yet started the 3,500-mile passage across the Atlantic. All entrants must arrive at the prologue port of Gijon, Spain, for compulsory safety briefings by 6th August, or face serious penalties or possible exclusion from the GGR. To complicate the issue, Gaurav has not yet completed his compulsory 3-day STCW Proficiency in Medical Care course. He will have to travel to Amsterdam or Barcelona to complete it before the Gijon briefings. American Entrant Elliott Smith is in the same situation. He has not departed the east coast of the USA on his Gale Force 34 and must also do the Medical Care course. But will there be time?

Guy deBoer from Key West, Florida has just arrived in Charleston, South Carolina and hopes to set out across the Atlantic for Spain in the next few days. He, too, is behind schedule having burst a newly fitted fuel tank during final sea trials 10 days ago. All entrants are required to supply a compulsory Final Registration Pack of certifications and critical safety information by 30th June to be considered an Official GGR Entrant. This includes current radio licences, station licences, survival course and medical training certificates, EPIRB registrations etc. It appears Guy may be missing some certificates.

I really hope these guys can make it in time to Gijon and complete their Registration Packs by the deadline. They have been preparing for this adventure for years. We cannot give dispensations for our strict safety regulations and if you know the weather of the Atlantic and speed of these boats, it is going to be a close-run thing. It is not looking good!

New Zealand entrant Graham Dalton failed to complete his 2000-mile GGR qualifying voyage last year from France. Based in NZ, he has been struggling ever since to coordinate the refit of his Rustler 36 A Southern Man in Les Sables d’Olonne in preparation for a new attempt. He has now failed to meet the strict Medical Care Certificate training requirements and has decided to withdraw from the GGR, rather than complete the three-day required course. It all just became a little too much with quite a few little issues combining to tip him over the edge.

South African Jeremy Bagshaw has arrived in Horta, Azores after a solo voyage direct from Cape Town. He has boat issues to solve and is not sure when he may be able to continue the voyage north. Kirsten Neuschäfer, also from Cape Town and the only woman in the GGR in making the same passage. All is going well for her having previously sailed 7000 solo miles from Canada to Capetown a few months ago following her refit. She is hoping to arrive in the UK in the next couple weeks, before then heading to Spain. With over 200,000 sailing miles and now 14,000 solo miles in her GGR yacht, she has to be a strong contender in the race.

Australian Mark Sinclair ‘Captain Coconut’ has been working hard on his boat after the non-stop solo voyage from Adelaide, South Australia to Les Sables d’Olonne. All was going well until a few days ago when he contracted COVID and discovered he needed a new motor. He says he was obviously ‘safer’ at sea and hopes to fit a new engine the first week of August and immediately sail for Gijon.

French entrant Arnaud Gaist is struggling financially. Even though sponsored for the GGR, his budgets are under stress. He is unsure if he will be able to continue. In the next few days, critical deadlines will appear and he is worried.

Ertan Beskardes (UK) on the other hand has been ready to go for a few months now. He retired from the 2018 GGR after just a few days missing his family. Each year since then he has been preparing and he is keen to get going. Same, too, for Austrian Michael Guggenberger. He retired from the 2018 GGR about nine months before the start, not ready to go. Now he is all done and raring to go with all jobs completed. He is enjoying his time working with his new partner NURI! Together they are preparing for this unique artisanal journey.

In a little over 18 months, 10 of the 32 paid up GGR entrants have retired, mainly due to the travel restrictions and complications of Covid and the global economic order. If the number of entrants drops from 21 to 18 on September 4th this year (which looks likely), it remains a respectable fleet for what is an extreme nine-month challenge. The GGR is an event that stands alone in the world of sailing and adventure sports! Nothing else compares and only those who really want it, make the start… let alone finish!