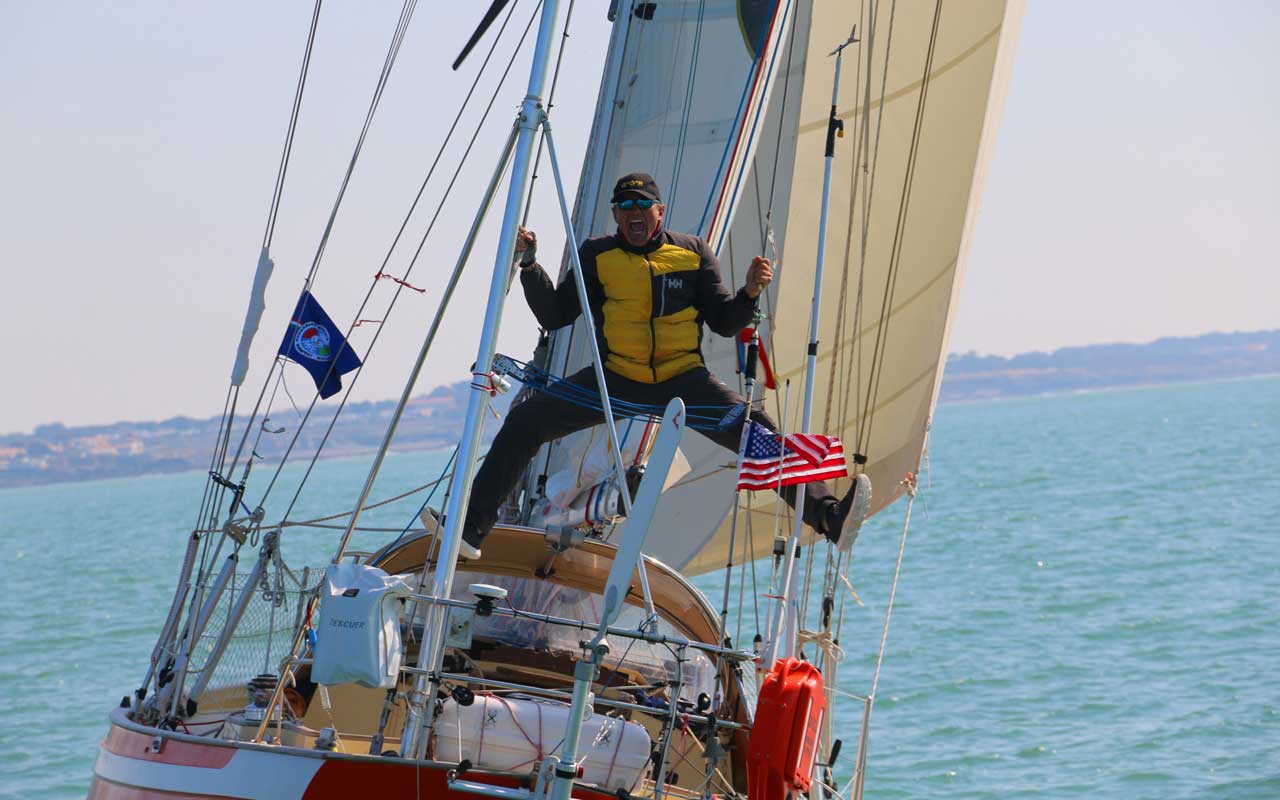 This is the happiest day of my life. And this [Les Sables d’Olonne] is the best place to be… the capital of offshore sailing.

Istvan Kopar on arrival at the dock

The 66-year old yachtsman from Delray Beach, Florida, who suffered continuing steering problems almost from day 1, overcame setback after setback throughout the race. The water tanks in his Tradewind 35 yacht Puffin became contaminated soon after he sailed down into the Southern Ocean, and by Cape Horn, the black mould growing inside the boat became so bad that his health began to suffer.

And the problems continued right to the end. He happened to arrive back in the Bay of Biscay shortly after the container ship Great American had caught fire and sunk, 180 miles due west of Les Sables d’Olonne, generating large tracks of oil and chemical pollution on the surface being blown onshore. And if that was not enough, Istvan also had to pick his way through a web of ship’s containers floating on or near the surface. On Tuesday, he was down to his last litre of drinking water but dared not process any sea water through his emergency desalinator, fearing the pollution would clog up the unit’s membrane.

His steering problems centred around Puffin’s wind vane self steering which Istvan admits he had failed to test adequately during sailing trials before the race start on July 1st. He first reported the problem on July 10, but continued for another 7 days before announcing that he was exhausted by lack of sleep and would stop in the Cape Verde Islands to replace the unit. He pulled into Sao Vincente on July 19 and joined the Chichester Class for making one stop, only to find that the replacement wind vane would take a further week to arrive.

A night’s reflection at anchor led Kopar to realise that his Windpilot wind vane had been wrongly assembled, and once this had been corrected, and knowing that he had not stepped ashore or gained any outside assistance, he applied to return to the GGR classification. This was granted, but the GGR Committee awarded him a 6 hour penalty for going into port and a further 18 hours for using his emergency satellite phone.

Once round the Cape of Good Hope, Istvan went to the aid of Swedish solo skipper Kjell Litwin, who was running short of water. Istvan handed across some of his vital supplies on September 27, not knowing that his own water tanks had become polluted which put pressure on him to collect rain water at every opportunity. He was given an 6-hour credit for the time lost.

On November 20, a navigation error led him into the Southern Ocean no-go zone, which led to another 6 hour 40 minute penalty – 24 hours 40 mins in total. Kopar should have served this in a ‘penalty box’ at sea, but because of continued issues with steering and health problems he faced from all the mould growing inside the boat, the GGR Committee ruled that this additional time would be added at the finish.

Rounding Cape Horn on January 1st, Istvan used this unique opportunity to scatter his father’s ashes within site of the Cape. ‘That is one of my best memories’ he said.

His biggest reward was, he says ‘Solving all the problems en-route’.

The self-steering issues led to an overload on the gearbox within Puffin’s pedestal wheel, which he had to strip down and refashion broken cogs from what he had onboard. He tried to circumvent the wheel steering altogether by fitting an emergency tiller, but that too broke and the lash-up he made to strengthen it used up the last of his epoxy resin supplies.

Kopar said: ‘It was torture for me. My self steering failed almost from day 1. The boat itself did not have a problem. It was I who had the problems. Luck was just not with me. I think I’m done with sailing now and will take up gardening instead’ he joked.

That was today… Tomorrow it may be a very different story!

Kopar’s return leaves just one more skipper at sea – Finland’s Tapio Lehtinen and his Gaia 36 Asteria, still 4,227 miles from the finish. He is not expected to finish before mid-May.