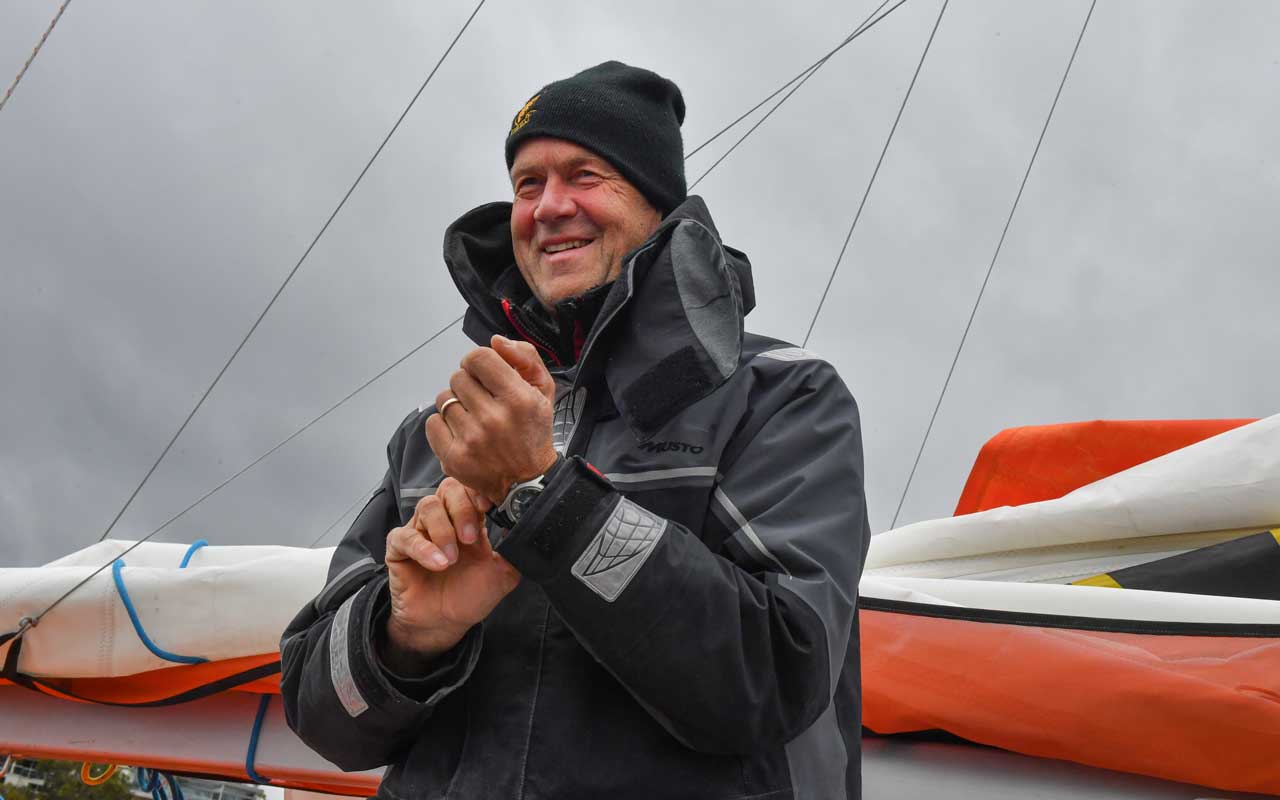 Now within 2,500 miles of the Les Sables d’Olonne finish line, the Estonian skipper has solved his immediate hunger problems by catching two large marlin during the past week, which should extend his meagre supplies of basic freeze dried food to the end of the race.

Not so good, was news that one of his running backstays supporting the mast broke on February 9, which lost him vital miles over 4th placed Istvan Kopar who is now enjoying the same Tradewind conditions 433 miles astern in terms of distance to finish. As One and All’s course meandered around on the tracker, Randmaa was forced to climb the mast twice to set up a replacement adjustable stay, and in doing so, gashed a finger badly. The deep cut has been festering since, which led him to seek medical advice from the GGR 24hr tele-medicine team at MSOS last weekend. He is now treating the wound daily and doctors are monitoring the situation.

Kopar, who is looking to take advantage of any situation to overtake Randmaa, is also fighting health issues. The American/Hungarian is suffering a recurring abscess under one tooth and a fungal infection under his nails. He too has called on the MSOS doctors for advice and is now taking a course of antibiotics to combat the toothache and applying antiseptic cream to his digits.

I could not ventilate the boat in the Southern Ocean and the interior is now covered in black mould. The black stuff is everywhere: on the plywood, sail bags, just everywhere. It is becoming a serious health issue, which could weaken my resistance to infections. I am washing everything down with bleach, but so far this doesn’t seem to be having much affect.

Other issues onboard Kopar’s Tradewind 35 Puffin continue to centre on steering. The cogs within the gearbox linking rudder and wheel pedestal, are disintegrating and ‘jump’ whenever there is any load on them, so he has ‘retired’ the system and made up a new emergency tiller from scrap materials to replace the one that broke several months ago. He has since managed to harness this to Puffin’s wind vane self-steering.

I’m very proud of the new tiller. I had to machine a new key from a piece of rigging, which I filed down by hand to make a perfect fit. The tiller is very long, so the big challenge now is getting around the cockpit because it gets in the way of everything. I’m keeping my safety line strapped on, because it is not easy – So much so that I’m thinking of taking up Yoga classes!

The big question is whether the tiller will last for the rest of the race. There is a wooden connecting piece which could break under load and I have no more epoxy resin.

But he has come up with a novel solution for one problem – stopping water running down the rudder stock into the boat.

I’ve cut up my hot water bottle to act as a seal which has stopped the water dripping down.

Finland’s Tapio Lehtinen, running in 5th place aboard his Gaia 36 Asteria, rounded Cape Horn on February 6, and has made most ground during the past 9 days despite the barnacle infestation on his hull. He will need to keep his wits about him during the days ahead, first because of a huge fishing fleet – perhaps 150 trawlers – working the banks 100 miles east of Puerto Deseado, Argentina, directly ahead of Asteria’s, course. The second issue are calms forecast to descend on this region tomorrow, which will slow his progress north. That’s a worry because in the virtual race between Tapio and Sir Robin Knox-Johnston’s progress in Suhaili 50 years before, the 1968/9 winner is calculated to be 300 miles ahead when you compare Suhaili’s last confirmed position on February 9 with Asteria’s plot today.

Plans for the 2022 Golden Globe Race

GGR organisers are in discussions with Les Sables d’Olonne Agglomeration to host the start and finish of the 2022 Golden Globe Race. The French port, which also hosts the Vendée Globe Race, has become a global centre for solo yacht racing and is keen to repeat the commercial adventure again in three years time. Yannick Moreau, the Mayor of Les Sables d’Olonne said this week:

The arrival of the Golden Globe Race has shown once again just how much maritime culture is entwined within the genes of the Les Sables region. The massive public welcome Jean-Luc Van Den Heede and Mark Slats received at the finish will now remain in the annals of solo sailing history.

This success results from the close collaboration that has developed between the Agglomeration of Les Sables d’Olonne and the Don McIntyre’s GGR organisational team. This is an excellent base from which to consider a new edition in 2022.

We must also consider the three sailors still competing in the current race. It’s our duty to welcome them properly and I have no doubt that Les Sables will respond just as enthusiastically to their return.

A host port for the UK activities during the build-up to the 2022 race cannot be addressed until BREXIT negotiations have been settled. Once a deal between Britain and the EU has been finalised, efforts will be made to find an enthusiastic partner to celebrate the original race back in 1968/9. In the weeks ahead, GGR officials will be discussing with Les Sables the opportunities of basing the 2022 edition in this French port. Their support and passion for the 2018 GGR is to be admired and we hope we are here for the next edition. We are extremely grateful for the warm welcome received for this edition from officials and public